Share All sharing options for: Oswalt, Feliz, & Lyon: The Seeds are Sprouting

Today, J.A. Happ, Brandon Lyon, and David Carpenter were traded to the Blue Jays for seven players. That is amazing. I could stop the post there, but the editor requires at least a few dozen more words before I am allowed to click submit.

I am about to utter a phrase that probably has not been said yet:

Without Ed Wade, the Astros' farm system would be much worse today than otherwise.

Check out this piece of artwork: 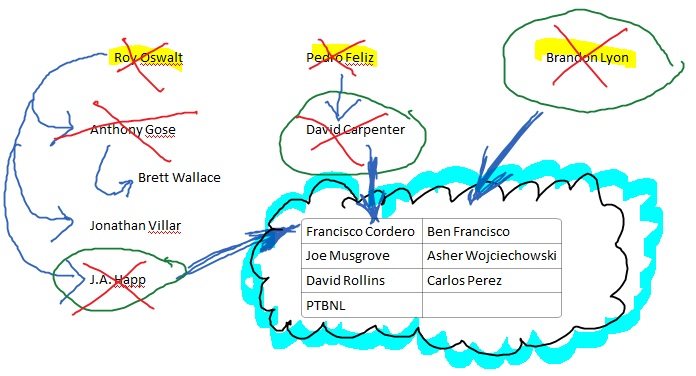 While the magnitude of my artistic genius sinks in, look what Wade and current GM Jeff Lunhow have accomplished. Roy Oswalt, Pedro Feliz, and Brandon Lyon were turned into nine players, all of whom (except maybe the PTBNL? Who knows?) project to have some sort of major league future. Some of these men, like Wallace, Villar, Musgrove, and Perez, actually have the ceiling of being difference-making regulars.

More after the Jump.

Generally I try not to project players because I have never seen most of these guys in person multiple times. However, I feel the need to put on my Astros Colored Glasses in order to illustrate how astounding these series of moves are.

After the Astros traded him and until the end of his contract, Oswalt pitched 221.2 more innings, for an ERA of 2.97 and a WAR of 4.5. That's pretty good, but the difference those 4.5 wins would have made to the Astros over the players who replaced him was not going to make them even the second-worst club in the majors.

Feliz played 40 more games on his contract after being traded from the Astros and hit .208/.232/.250, or roughly as well as Brad Ausmus' worst year at the plate.

Donning my glasses, here's what they got in return:

Is there any Astros fan who doesn't love the outcome of this series of signings and acquisitions? We lambasted Wade for acquiring Feliz and Lyon, but even those guys seem to be the straw turned into gold. Wade planted the seeds, even if the eventual outcome was not what he intended. But Lunhow looks like a master gardener, and the Astros' conservatory might bloom far sooner than most of us anticipated.