Jordan Schafer, Now Would be a Good Time to Shut Up

Share All sharing options for: Jordan Schafer, Now Would be a Good Time to Shut Up

This is purely an editorial post, and my opinions here are not necessarily shared by anybody (though I suspect a vast majority to agree with what I am about to type).

A few hours ago I typed an email to Tim and David to let them know I would be going on paternity leave for the next few weeks and unavailable for posting. Then, during lunch I signed on to Twitter to see what was new in the world. This is what greeted me, and I had to write about it: 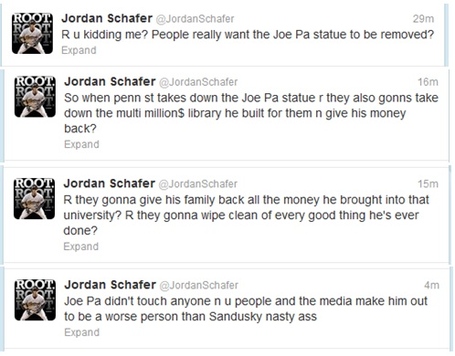 Now, I'm fairly politically conservative, so I'm all for individual rights to free speech, opinions, the right to tweet, and the right to be a twit. But let's lay out the facts:

In the past couple of years, Jordan Schafer has:

In short, Schafer should recognize that his major league career is on some seriously thin ice. Fans (including myself) are sick of his antics, inability to learn plate discipline, bad routes to routine fly balls, and don't-give-a-crap attitude. At least, that's what is coming across to the fans through the TV Screen, Radio, and stats. If he were at all self-aware, he would know this. Schafer is not Matt Kemp, Curtis Granderson, or Mickey Mantle. He is Jordan Schafer, and at this point, he is proving himself to be completely replaceable.

If he were at all smart or at least a bit self-reflective, he would realize now is a very bad time to be defending a man who was found to be protecting a serial child rapist. There's no good answer on if Joe Paterno's cover-up for Sandusky's pedophilia will or should taint the entirety of his career. There's no good answer if Penn State should disregard Paterno's numerous contributions to the school and to charitable contributes in the light of one horrifically bad decision.

But these things are completely irrelevant in the case of Jordan Schafer. Schafer is already in a bad light. The fans are tired of him, the coach is tired of him, the owner approves of his benching, and he's playing like crap. And he takes to Twitter in a grammatically-embarrassing, profanity-laden rant against people who feel that the crime of hiding a child rapist justifies removing Paterno's name and statue from Penn State campus facilities.

Jordan Schafer, take my advice: Now would be a good time to Shut Up.