Share All sharing options for: Carlos Lee: Victim of Circumstance?

A few days before Carlos Lee was traded to the Miami Marlins, Brian McTaggart blogged about the then-Astros First Baseman. A few lines of McTaggart's concise summary of Lee's career in Houston caught my attention and sent my thoughts in an interesting direction.

He delivered in his first three years with Houston, hitting .305 with an average of 29 homers and 107 RBIs.

Over the next few years, however, the Astros began cutting payroll and were hampered by an overall lack of talent in the Minor Leagues. Management realized it needed to rebuild, and Lance Berkman and Roy Oswalt were traded for prospects in 2010. Young stars Michael Bourn and Hunter Pence followed in 2011.

It was an innocent rehashing of the story we all already know. But the sentence sequence seemed to link the timelines of Lee's power decline and the Astros trading away their major league roster. I wondered: How much of Lee's decline in power has been affected by the lack of quality hitters around him? A short exchange on the subject with Byran Trostel from astroscounty.com and howmanyaltuves.com ensued, and I decided it was worth investigating further.

Can a slugger's power numbers be dampened or strengthened by the quality of the offense around him? Since then, the topic has become slightly less relevant for Astros fans. But if what I suspect is correct, we need to re-think Lee's contribution with the Astros in a different light. Quite possibly, Astros fans will need to get off his back about his decline in power stats and help repair his baseball reputation in the town he will likely continue to live in.

It's pointless to rehash the details of Lee's Astros career--just read McTaggerts post above. The short version is that Lee posted good Home Run numbers early in his tenure, but low totals later on (2011 & 2012, specifically). In their need for a scapegoat, something I have never understood, many Astros fans have unfairly labeled Lee as fat, lazy, and old. He is none of those things in reality, but scapegoats with $100,000,000 contracts that do not play like superstars are easy targets for fan frustration.

The premise of my postulation (or is that 'postulation of my premise'?) is:

As the effectiveness of the lineup around a slugger decreases, so does the power output of said slugger.

Rather than explore why this could occur--a virtual impossibility for everything except pitcher approach--I instead decided to focus on if a player's power stroke is linked to the lineup around him.

The method is simple, though time-consuming. I found the Isolated Power (ISO) numbers for Lee in every season of his career in which he had more than 300 Plate Appearances. Recall that ISO = (SLG%-AVG) and is a stat that measures power output by looking at Total Bases per At Bat minus the first base earned per Hit. Next, I found the Wins Above Replacement (WAR) for each of the offensive lineups Lee played with. Then, I looked up the same data for other sluggers based on whim and player comps to find out if the results were repeatable.

To show the data trend, I extrapolated the raw ISO and WAR data into a sixth-order polynomial (thanks to Excel for making life easy).

Before proceeding, let's briefly discuss typical aging trends for sluggers. Baseball Prospectus has a great article titled "How do Baseball Players Age?" that I recommend for a granular understanding of when players peak. Keep in mind that experts vary on details about the subject, but their premise is usually the same within a year or so. Likewise, Eno Sarris at Fangraphs wrote an article in January titled, "Hitters Age Like Wine, Power Like Cheese," that specifically deals with power hitters' decline. The point to be made here is that power hitters do age, and one of the effects is lessened power numbers.

The chart below shows Lee's power stats during his entire career. 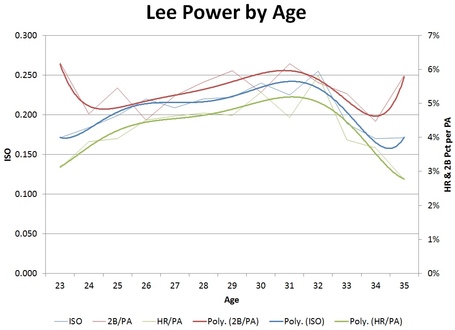 We see that he actually peaked later than most power hitters--around age 30 rather than age 25. This chart also shows that Lee has been a "doubles hitter" his whole career. His ISO dropped further and faster than a typical power hitter's does as well--approximately 0.080 points from his peak between ages 31 and 35.

So the rhetorical question now is: was normal aging the sole cause of Lee's decline in power numbers, or was something else at work?

The quickest way to compare a player's power output to the skill of the lineup around him is to compare that player's ISO to the WAR of the team he played on, as described above. 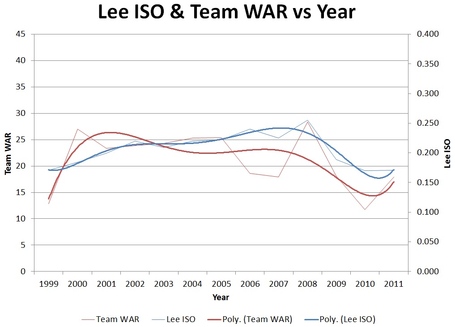 The chart above shows that there definitely is a trend between Lee's power production and the talent level of the offense around him. Overall, his decline in ISO is matched by his teams' decline in WAR. So far, it seems the Astros' fire sale of offensive players might have helped cause Lee's power outage. There is a chicken/egg quandary here though, as it's possible Lee's power outage helped cause the decrease in team WAR. However, it stands to reason that since it takes nine everyday players to create a team's WAR, the impact of just one player's power alone can not determine more than a relatively small portion of that team's success.

What remains is to see if this trend is repeatable. I selected several players to compare against, each for different reasons: 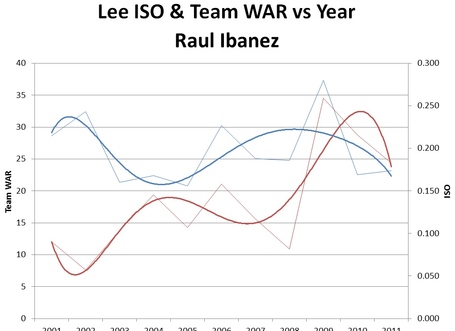 Leave it to Ibanez to crush my hypothesis by being uncooperative. Only towards the end do his ISO and Team WAR trendlines start to match up. However if you look at the raw data lines, you see that their directions actually do coincide and that it's only the trendlines that don't match exactly because of the huge Team War increase between 2009 and 2010. Let's soldier on. Here is Luis Gonzalez: 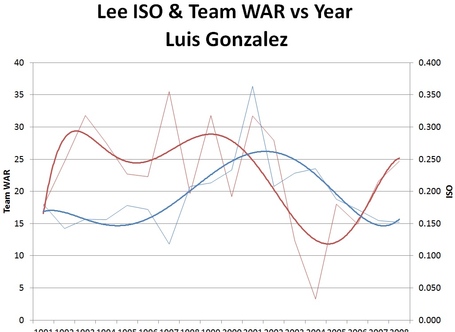 Gonzo's Team WAR and ISO match up a little better. At least, as the Team's War begins to trend downward, his power level soon follows. Here is Alou: 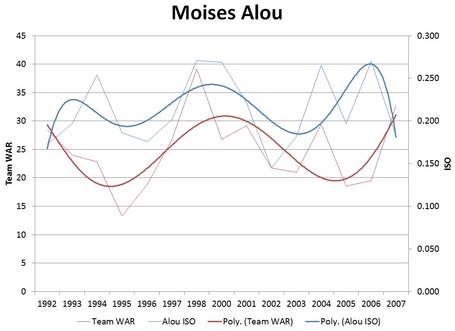 Wow, now we see some matching of Lee's results. Where Gonzalez' ISO trend followed his teams' WAR loosely, Alou's is almost a mirror image of the WAR trendline. Next, Chipper Jones: 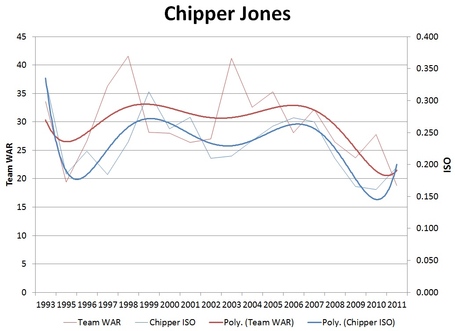 In this interesting case of a player never leaving the club he started with, we see Chipper's Isolated Power mirror his Team's WAR again, further supporting the hypothesis that a hitter's power can be affected by the skill of the team around him. It's worth noting that Jones is a sure-fire Hall-of-Famer, meaning that if the correlation between power and lineup holds true, even the best hitters in history are not immune to the effects. Lastly, here is the graph showing the most recent example, Adrian Beltre: 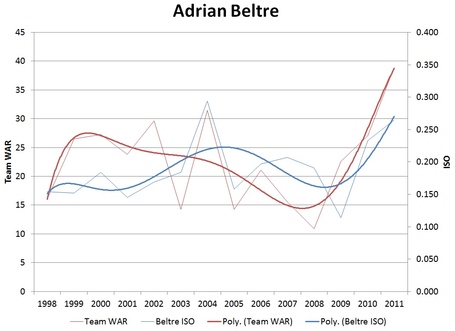 Several years ago, Beltre endured intense media scrutiny in Seattle because of his inability to hit for power while nestled in one of the weakest lineups in history. He had previously launched 43 home runs during his last season with the Dodgers, and he was vilified in Seattle for being unable to break the mid-20 mark. (Sound familiar, Astros fans?) However, in his first season with the Red Sox, Beltre hit 28 home runs, followed by 32 with the Rangers. This season, he is on pace for 30 again. Beltre's case is perhaps the most compelling case to validate that personal power and Team WAR are related because he has been with some of the best and the worst offenses of the last several decades.

Ibanez and the Effect of Location in Lineup

It's also obvious from Ibanez' and Gonzalez' cases that while parts of a player's career mirror the Team WAR, some players may be more able to overcome the effects of playing in a bad offense better than others, or may have circumstances that mask the effect.

A follow up study might include a closer look at the players NEAR that slugger in the lineup. For example, Lee hits fourth in the lineup. The 2, 3, 5, and 6- hole hitters would have more effect on the way pitchers approach his Plate Appearances than would the 1, 7, 8, and 9th hitters.

In Ibanez' 2007, the top 5 in the Seattle lineup were Ichiro Suzuki, Adrian Beltre, Raul Ibanez, Jose Guillen, and Richie Sexon, all of whom were excellent hitters at that time or only at the beginning of the downward trend of their careers. However, the rest of the lineup of Ben Broussard, Kenji Johjima, Yuniesky Betancourt, and Willie Bloomquist destroyed any hope the Mariners had of posting top-notch overall offensive numbers.

Meanwhile, Lee began his Astros career surrounded by Hunter Pence, Lance Berkman, Mark Loretta, and Luke Scott (not great, but not terrible either). But his Astros career ended by being surrounded by Jose Altuve, Jed Lowrie, J.D. Martinez, and Chris Johnson. Not exactly a murderer's row. If Carlos Lee gets on base, what do opposing pitchers have to be scared of? And why should they be afraid to pitch around him if 75% of the time, nobody is on base when he is at the plate?

From the data presented, it is fairly easy to assume that a slugger's Isolated Power can be strongly tied to the skill of the lineup put around him. Possible causes of this may include the fact that a pitcher will be less aggressive with a good hitter who has nobody of consequence near him in the lineup to protect him, whereas they would be unwilling to "nibble at" a player and risk putting him on base if somebody of the caliber of, say, Lance Berkman were hitting behind him. Or in front of him. Other possible explanations may include just not giving a darn because he is tired of playing on a losing team or a strong need to get on base by any means necessary instead of slugging home runs because if he doesn't, then nobody will.

Fans always seem to need a scapegoat for their team's poor performance, and Carlos Lee with his Tim Purpura-awarded $100 million contract was an easy target. But the reality seems to be that Lee's power numbers were aided in their natural age-related decline by an owner that refused to recognize that the players he had around Lee were not skilled enough to boost the team to competitiveness and General Managers unable to construct an efficient roster with the resources available. For this, Lee took an unfair amount of heat that should be directed elsewhere.

In retrospect, and with the data above, Astros fans should be encouraged to embrace Lee when he eventually returns to Houston to live, to be happy if the Astros re-sign him as a DH in 2013, and to forgive the big guy for basically being in the wrong place at the wrong time. His smile and enthusiasm will be what I remember when I look back on the Astros of the 'aughts, not the sinking winning percentage of the team that he could only have a finite and limited chance of impacting because of the front office's lack of perspective.

P.S. If you haven't seen the State Farm commercial with Kerry Wood and Andre Dawson, watch it here. It's pretty funny.