Today must be opposite day.

The Astros had a good night on offense despite their Designated Hitter going 0-4 with two strikeouts. Brett Wallace crushed a first-pitch home run to deeeeeeeeep right field in the second inning, Jed Lowrie hit his eleventh in the fifth, and Brian Bogusevic broke a 0-3 night with a three-run jack in the ninth to right center. The Astros had three walks, two of which led to runs, and Jose Altuve added two more doubles to his collection of multi-games and multi-base hits. Altuve did get caught stealing (picked off, actually), but his run-down allowed Maxwell to score from third.

Rodriguez started out strongly, only facing seven batters in the first two innings before laboring through the third and fourth. Despite this, he did not give up his second and third runs until back-to-back doubles by Alex Rios and A.J. Pierzynski in the sixth. From the bullpen, Wilton Lopez, Wesley Wright, Fernando Rodriguez, and Brett Myers held the White Sox to zeroes the rest of the way, finishing off a much-needed Win for Wandy.

Justin Maxwell provided a couple scary moments in the sixth inning, first by leaping to catch a misjudged fly ball, then by falling down after corralling a soft line drive. Defensive gems were provided by Chris Johnson (spectacular bare hand grab/throw to nail a runner at first after dodging a another baserunner on his way to third), Altuve (diving catch in shallow Right Field), and a sliding catch by Maxwell to end the game. The Astros employed an interesting shift against Adam Dunn. Lowrie slid over to third, and Johnson (later Brian Bixler when Johnson left the game with sore hamstrings) played shallow right, positioned laterally between the first and second basemen and vertically between the second baseman and right-fielder. This proved effective on Altuve's diving stop, though it didn't prevent an earlier Dunn single from dropping into Right Field between Johnson and Bogusevic.

Why tell you more? I'll just show you! Scorecards after the jump. 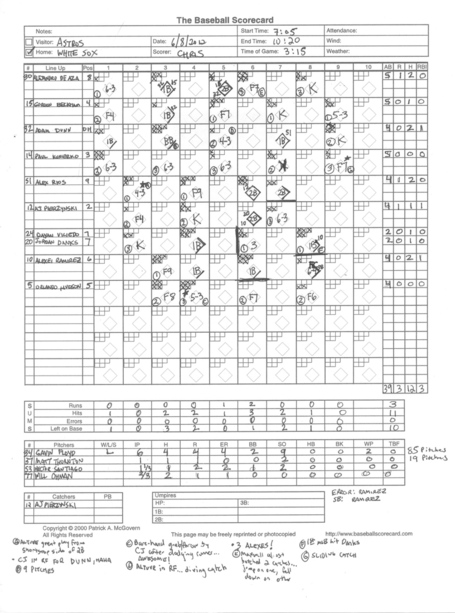 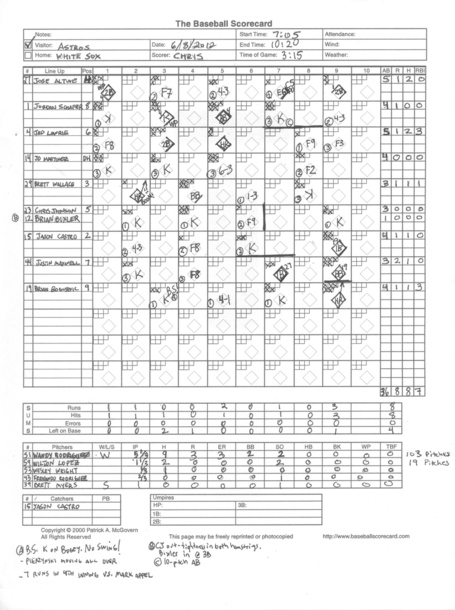