The first batter of the game, Shin-Soo Choo (gezhundheit!), reached third on a triple that replays showed might have been foul. The next batter plated him on a sacrifice fly. If you turned the game off at this point, you did not miss much scoring, but you did miss a great ball game.

Yes, the Astros lost for the umpteenth time in a row, but the pitcher of the game was not the winning pitcher. Indians' starter Ubaldo Jimenez recalled shades of 2010 when he led the majors in Win % by throwing 6-2/3 innings, giving up only four hits and four walks while striking out eight. But Astros starter Lucas Harrell outpitched him, giving up only two hits and three walks while striking out an astounding nine.

I'll write that again, in case you missed it. Nine strikeouts.

The Umpire's strike zone was a teensy bit generous, but most of the strikes Harrell generated were on swings, not borderline calls. His sinker was destructive tonight, sweeping down and away from the batters and generating a beaucoup of silly-looking swings. His only struggles came from a bases-loaded jam after two walks in the seventh. More on that below.

Once again, the Astros could not escape the strikeout bug (twelve). The loudest hit of the day came on a Brian Bogusevic double immediately after his defensive gem (again, more on that below), and Chris Johnson had two of the Astros' four total hits. The eighth inning got exciting with three warning-track outs against Pestano, who may have the greatest name in baseball right now. But nothing came of the inning.

The play of the game came on a double play outfield assist by Bogusevic. He caught a ball in deep foul territory then launched a strike to Chris Snyder at the plate, who tagged out Carlos Santana in the spikes. It was not even close. That double play ended a bases-loaded seventh inning, preserving Harrell's statistical masterpiece. The other great play came on a behind-the-back snow cone catch by Johnson in foul territory in the eighth. The only bonehead moment was in the ninth, when Snyder called off Johnson on a pop foul at home, seemed to lose the ball in the roof, let it drop behind him, then glared at Johnson as if it was somehow his fault. That runner eventually came around to score the second run of the game.

Here is the scorecard my wife took during the game 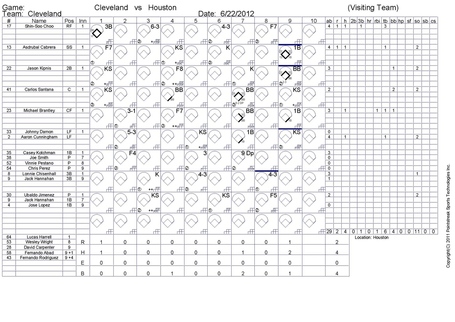 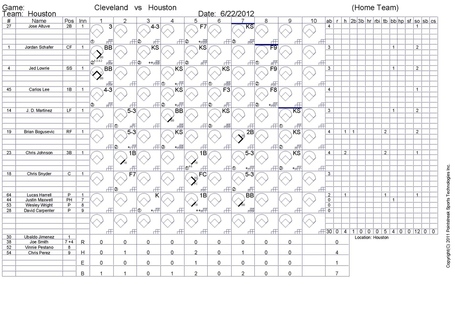 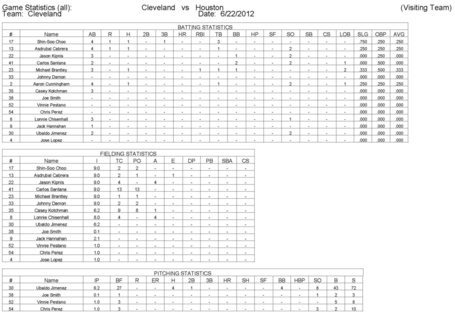 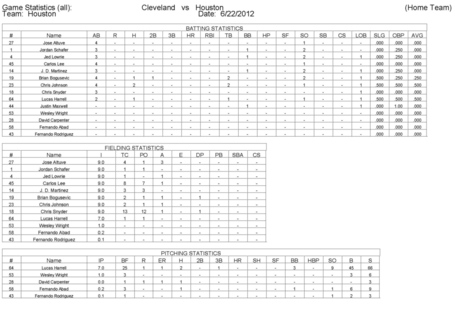