Nope, this feature hadn't disappeared. It was just put on the DL for the weekend...

This time around, they turned a .500 road trip into a debacle in a hurry. Only two teams have scored more runs than the Rangers in games against Houston this season: the Cardinals and the Rockies. In both cases, Houston have a better run differential than the horrid -22 against Texas this season.

Injuries have played a part in this latest trend, but it hasn't been good for a while. Oh, and this only gets worse next season, when Houston plays six series against the good, ole Rangers.

2) Uni options - On the plus side, Uni Watch has some of his favorite user suggestions for the Astros upcoming uni redesign. Some of them are pretty fantastic, and I'd be reasonably pleased with any of them. My favorite? 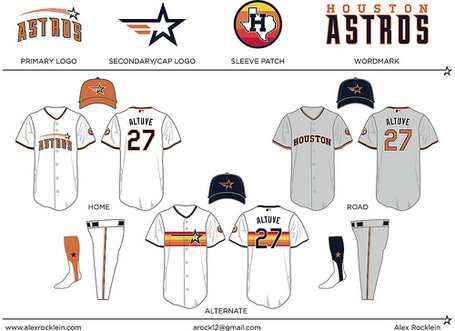 That's a fantastic idea to have the rainbow stripe across the chest. I also like the shooting star being worked in as well on the home unis.

We'll know sometime in the next nine months what the new uniforms will look like. I've heard that they're going to be an upgrade, but that they aren't what we've seen on the internet to this point. Hopefully, that means a return to the navy and orange, possibly from that shooting star era.

I think I'd settle for a return of the H with a star logo.

3) Keuchel's debut - I'm not sure if you guys have as much fun listening to the podcast as we have recording it, but one of the best parts for me have been needling Tim about prospects he likes. One of those guys is Dallas Keuchel, who acquitted himself well in Arlington on Sunday.

Looking over his Pitch F/X data, he threw mainly a four-seam fastball and a changeup, combining to throw those two about 75 percent of the time. He also flashed an effective curve, but only threw six of them. His fastball averaged 88 MPH, which isn't great, but also is better than I'd expected (reports on that fastball had me really worried).

That velocity puts him at the very bottom of the league, but isn't a deal breaker. After all, Wandy's average fastball comes in at like 89 MPH, so Keuchel is right there with many soft-tossing lefties. If we're looking at best-case scenarios for him, it looks like that might be a guy like Mark Buerhle, who is one of the few pitchers in the majors to throw his change as much as Keuchel apparently wants to. Only two starters this season have topped 30 percent changeups and they are James Shields and Buerhle. Keuchel was at 38 percent against the Rangers.

While I don't want to draw too much from one start in front of an unfamiliar Pitch F/X camera, it's worth noting that Keuchel's four-seamer has great downward action that should generate consistent ground balls. It's also got great run away from right-handers, which helps him pitch on the outside of the zone. His change is also very similar to that four-seamer, which is a good sign for it being effective.

When we talked on the podcast, we brought up the broadcasters talking about his cutter. I said he only threw three of them in the game, but looking at the actual pitch-by-pitch data, I think there were three pitches mis-classified that should be cutters. At least one of those was a slider, which means he threw as many cutters as curve balls.

Both of those pitches break quite a bit in on right-handers, which will be important if he wants to consistently jam righties.

Overall, it's an interesting showing. I'd like to get more info on Keuchel to see if his pitches and pitch selection remains consistent, but for now, I'd think he's shown enough to stick around.