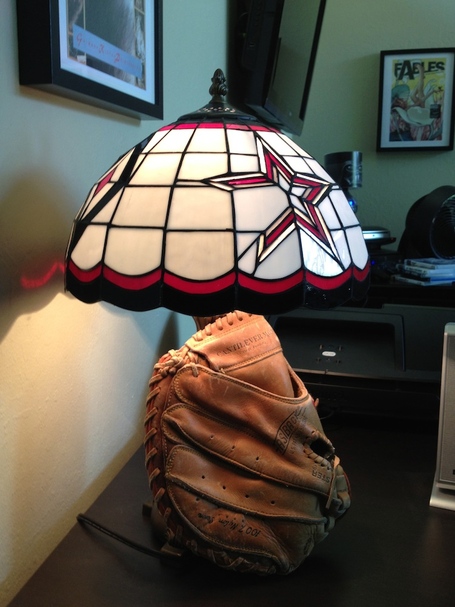 For some reason, the appeal of being a walking demolition man with 20lbs of padding and a helmet seemed like the greatest idea in the world. It wasn't until I started to play the game that I started to develop a passion and love for being behind the plate. I played in little league like most kids today, and coming from a family that didn't have much my parents had to sacrifice a lot and work a little bit harder in order for me to be able to play baseball.

As a child, you never realize how much time and effort your parents put into your childhood activities until you become a parent yourself. For the most part, I was completely oblivious to how hard my parents worked as a child. It was simply I want! I want! I want! I was no different and I wanted a catchers glove since I was playing catcher for my little league team.

I remember begging my dad for this catchers glove to the point where everyday my dad would give me the same response each day. "I'm sorry Sean, but we cannot afford it." "You will simply have to use the team glove." I would ask him everyday for a couple of months until one day my dad simply asked me to come outside because he needed help with something. My father and I walked outside and towards my grandfather's shop where my grandfather and my father worked every day of the week.

Once we got to the shop, my dad simply said "Your mother and I thought that you could use this for the upcoming season of little league."

To my surprise, was a brand new Rawlings catchers glove. I can't tell you what it's like to win the lottery or what its like to find that infamous pot of gold, but as child this was as good as it got. I had hit the lottery. My dad didn't own a glove nor had he ever played baseball, but that day he took the time out of his work day to play catch with his son.

Using my regular glove, my dad and I played catch for the first time for about an hour that day. For the most part, I would learn to catch pop ups by myself by throwing the ball up in the arm because my dad had to work all of the time in order to put food on the table, a roof over our head, and clothes on our backs. At night, my dad would take time and help me oil my glove.

My father didn't know anything about oiling baseball gloves and I'm pretty sure that he tried to WD 40 the glove and give it a quart or two of Valvoline 10W30, but he tried anyways. Every night he would help me oil my glove, wrap it with string, and put the glove under my bed in attempt to break the glove in. He didn't do it because it was his job or I begged him to do it. He simply did it because for him, it was time with his son after a long, hard day. It was time away from the day, where he didn't have to worry about bills or how they were going to put food on the table.

When it came to baseball practice, my mother and father would split the duties of dropping me off and picking me up from every practice until I was old enough to drive. My dad would simply park in center field and watch every one of my practices from his 1985 Chevy Impala that we often called the "The Dodge."

I remember sitting behind home plate learning the catcher's position on every pitch looking to center field to see my Dad's car. My Dad never had the time to coach, but after every practice he could tell me every play that I made or every hit that I had in practice. I remember the first time I hit my first home run in practice like it was yesterday, but it was the smile on my Dad's face and the look of pride that lasted about a week that I will always remember. To this day when I walk into a baseball park to watch I game, the first and last place that I look is center field.

Vacations for our family were a luxury that we often couldn't afford, but when we did we would drive from the small town of Marble Falls, TX to the big city of Houston for our family vacation. Our vacation would simply consist of us going to AstroWorld for two days and going to an Astros game at the Astrodome. This is where my passion and love for the Astros and the game of baseball started. We would get upper deck tickets because it was cheaper for a family of five, but as a young kid I didn't care.

I didn't care that we had to sneak food in because it was cheaper or that we were so high up that the baseball players looked like tiny ants with rainbow color jerseys. As soon as I saw the baseball field for the first time I was in love. I simply sat down with my catcher's glove in attempt to catch a foul ball, which at the time didn't seem so unrealistic and simply got lost in the game. Everything from the crack of the bat, the sound of the catchers glove popping after each pitch, and the small chance to see a ball get in in the outfield seats left me in state of amazement.

Today, I think about the catchers glove that my father worked so hard to buy and it wasn't until I was an adult that I learned how hard my dad had worked in order to buy this catchers glove. As a kid, I didn't know that my dad had picked up odd jobs on the weekend to pick up extra money for the family and he would take $5 from each side job that he picked up and put it towards the catchers glove that was so desperately wanted by a young child. It was little things like this that made my parents the parents they were. They didn't have much to give, but they worked as hard as possible in order to provide for their family and give their children luxuries that we couldn't afford.

Here's to you Dad on Father's Day. Every time I watch the Astros games, I think of our family trips to Houston and how much I appreciate the things that you did and the hard work that you and Mom put in order for us to have things such as catchers glove and our family trips.

To this day, my Dad still impresses me with things that he knows that will be special and knows how much I love the game of baseball. One day at work, I received a package from my Dad and to my surprise I opened up the package to find an autographed baseball. As I read each individual autograph, it occurred to me that this was not an ordinary autographed baseball. The baseball had autographs from my Grandma, childhood friends, cousins, and my Mom and Dad. I collect sports memorabilia and probably have over a hundred autographed baseballs, but if our house were ever on fire or if there was ever a zombie apocalypse this would be the first baseball that I would grab.

I love you "Old Man" and I hope that you realize how much I love you and I appreciate everything that you and Mom did for us and still do for us. On this day, I wish you a Happy Father's Day and I will always look for you in center field.