A Comparison of Carlos Correa's Signing to Previous 1-1 Picks

Share All sharing options for: A Comparison of Carlos Correa's Signing to Previous 1-1 Picks

Recaps are a lovely thing, so it seems a nice way to begin this article. On June 4, 2012 the Houston Astros made Puerto Rican High School Shortstop Carlos Correa the first pick in the MLB First Year Player Draft. Only three days later, Correa agreed to a deal that will pay him a signing bonus of $4,800,000.

$4.8 million is a lot of money, but the backdrop of the new Collective Bargaining Agreement (CBA) made this signing interesting. The new draft slotting system gave the Astros $11.177 million to throw at their first ten picks, collectively. The Office of Authoritarian Oligarchy, colloquially known as the "MLB Commissioner's Office", determined that $7.2 million would be the appropriate portion for the Astros to bestow upon the first pick of the draft. The ultimate goal of this part of the CBA is to curtail the perceived increase in wealth by youngsters who have yet to begin their professional careers. Well, the men behind the curtain decided that enough was enough and the draft was changed to severely penalize clubs that overspent their allocation.

The Astros instead agreed to a contract that would spend only 67% of the slot recommendation on Correa (bypassing more expensive potential picks in the process), which amounted to only 43% of their total allocation for their first ten lucky contestants. That left a goodly $6.4 million to sign the remainder of their top picks, some of whom are expected to be relatively expensive.

Now that the Correa signing has been put into more perspective than Crazy Stairs, his signing can be compared to other #1 overall picks of recent yore and some early conclusions may be jumped to about the effectiveness of the CBA changes.

The last time the Astros were graced with the mixed blessing of a first overall pick was in 1992, when they famously chose Phil Nevin, thus ignoring all of the choirs of angels that proclaimed the future hall of fame candidacy of Derek Jeter {sarcasm}. Nevin signed for $700K that season, a mere paltry sum compared to Correa's bonus, much less the $8 million handed to Gerrit Cole by the Pirates in 2011.

But all $700K's are not created equal, as this one was dealt two decades ago. As the price of gas constantly reminds, dollars depreciate. Using one of the various inflation calculators available on the World Wide Web, one can easily discern that $700K of 1992 money equals a current value of $1.148 million 2012 Washingtons. Still we see that Correa's bonus is worth about four times that of Nevin's. 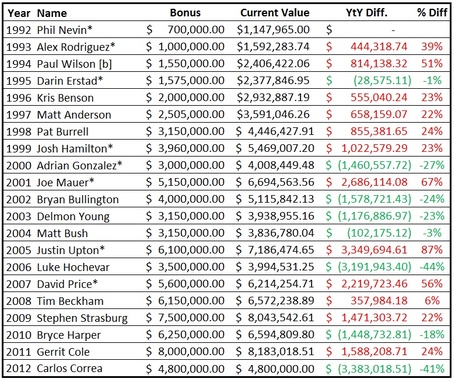 From this table, we can see that the 41% difference in current value between Correa and Cole is the second-largest drop-off in bonus money from year one to two in the past twenty years. In fact, one can almost call it the largest drop off because the money paid to Justin Upton as he came out of high school was completely absurd compared to the players drafted #1 overall around him, and the Royals signed Luke Hochevar after a wacky contract dispute the previous year and him pitching in the Independent Leagues that resulted in cost savings.

The other interesting thing that this table illustrates is that the powers of MLB were not crazy by being concerned about the increased draft spending. From 1992 to 2004, other than outlier contracts given to Joe Mauer, Bryan Bullington, and Josh Hamilton, the bonus handed out to the first pick sat between an adjusted value of $1.5 million to $4 million. Then, starting in the early 'aughts, the bonus money handed to first overall picks jumped to the $6-8 million present value range.

It is interesting to note that from 2004 to 2011, four of the number one overall picks were represented advised by the money machine known as the Boras corporation. In addition, public and insider opinion holds that the Padres selected Matt Bush over Boras clients Stephen Drew and Jered Weaver in a conscious effort to save money. One could make the claim that the top of the draft has been heavily influenced and affected by Scott Boras for at least a decade, partially causing the increase in average bonus value during that time. Because of that, the CBA seems specifically geared to rein in the super-agents who have been able to supersaturate their clients' monetary earnings prior to even donning professional uniforms.

In that light, Correa's contract is perfectly reasonable and even slightly above the average contract value for first picks during the pre-hyperspending years. It remains to be seen if future clubs follow the blueprint laid down by the Astros, thus achieving the goal of restructuring the draft in the CBA.

Additionally, the data shows that Correa's contract lines up with the average present value for other High Schoolers drafted in the first spot for the past twenty years:

And for comparison's sake, he's close to the average present value of post-college number one picks as well:

So in terms of present value adjusted for inflation, Correa's bonus is not low as some journalists have indicated. Rather, it is more in line with the historical value of the number one overall draft pick. It is a breath of normalcy after a decade of hyper-inflated bonuses.

The next interesting aspect of Correa's signing is how quickly it happened. Traditionally number one picks have the most bargaining power, therefore their agents advisers tie the club up until the last possible moment before the deadline in order to squeeze maximum benefit for his client. For the last three seasons, the Boras Corporation held the players to the very last possible day and even last possible minutes before the signing took place.

Unlike inflation of contracts though, players holding out to maximize their bonus is nothing new. The chart below shows the difference in days between when the player was drafted and when he signed. Only three players in the past twenty years have taken less than about two weeks to sign: Josh Hamilton, Adrian Gonzalez, and Carlos Correa.

This season, it was in the Astros' best interest to sign Correa quickly because that gave them surety over how much cash they would have for the remainder of their top ten. Again, time will tell if future clubs follow the Astros' playbook in this manner, but it is a safe bet that the days of extended player holdouts are over. This is a hugely positive thing, as it gives the player several months of extra Rookie or A level ball that can jump-start their appearance in the majors by a season just by exposing them to professional instruction and competition that much sooner.

The Astros were also lucky to draft a willing partner in Correa who just wants to play ball, play ball for the Astros, make the majors as soon as possible, and become a Hall of Famer. In a draft class with many high-upside players but nobody who clearly stood the best, this perfect storm allowed the Astros the opportunity to sign arguably the top raw talent in the draft class while also allocating money to deepen their farm system with sorely-needed top-level talent. The circumstances could not have worked out better for the Astros for a huge short-term win and a possible larger long-term one.