It's a red-letter day, Astros Fans. From this point forward, Chris Johnson should be owned in all fantasy league formats. Last week, Johnson posted numbers that helped him reach the 13th-most valuable player in Fantasyland, and his real life value was not far behind. Third Base is too shallow for you to continue bad-mouthing Johnson due to his last year struggles. He's now the 78th-ranked player in all of baseball for the season, which makes him valuable indeed.

Similarly, Astros fans can also rejoice as it seems they have found their shortstop. Lowrie will not hit over .400 for long, but he was the 15th-most valuable major leaguer last week, and the 5th-most valuable over the past 14 days. Lowrie has dual-position eligibility and should be starting every day in your league. 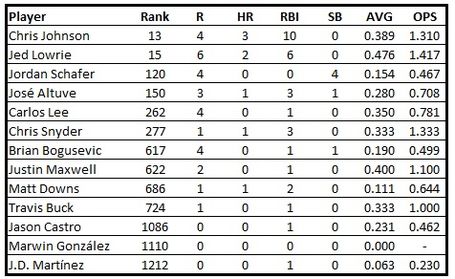 Last week, Jordan Schafer punched himself back into semi-useful territory with four stolen bases, but probably harmed his managers with a terrible batting average and OPS. Jose Altuve continued to be productive as well. It's time to bench J.D. Martinez until he learns to adjust to the pitchers who have so obviously adjusted to him.

In Pitching, Brett Myers predictably continues to be useful, though his K/9 is disappointing for a closer. A save is a save though, and Myers had three of them last week. Wandy Rodriguez continues to be a fantasy ace, and Bud Norris finally gave his owners something to be happy about. But like Martinez, it is time to bench J.A. Happ after two stinker weeks.

Looking ahead, the Astros have the Miami Marlins at home and are away for the Pittsburgh Pirates. These are all winnable games, something I would not have said at the beginning of April. The Marlins lineup is extremely dangerous but has struggled all season--something I hope they don't correct against Astros pitching. Wandy Rodriguez should be started on Monday, but I would caution against other Astros pitchers in that series until they start displaying consistency.

Norris is a must-start in Pittsburgh, as he could build on last week's success and add his typical strikeout numbers.