This is what happens when David travels, you get me for your Friday three things. I take no responsibility for what's about to happen, this is on David.

1) Andy Pettitte may have misremembered - Or at least he's given it a 50/50 shot that he misunderstood Roger Clemens confiding in him that he used human growth hormone (HGH). This doesn't bode well for the prosecution team because now they'll have to rely heavily on Brian McNamee, who has character issues that they'll have to deal with. In contrast Pettitte has a fairly clean image, despite admitting the use of HGH, who the prosecution was going to lean heavily on. It now appears that may not be the case considering that have to prove beyond a reasonable doubt that Clemens lied.

This isn't exactly Pettitte switching sides though. From the Associated Press by Joseph White:

I have to wonder if the prosecution had this in mind. If Pettitte was going to be the center piece with which the prosecution surrounded their case, they may have just lost. That's exactly what several articles are speculating; They're not out of it, but their case has been significantly weakened. They've already whiffed the first time and now it appears they've started the second trial in a 0-1 count.

2) Sabermetrics is in your parks eating your scoreboard - Mike Fast made us aware of this new feature Tuesday:

Run expectancy on the scoreboard at Minute Maid Park tonight.

I sent out a request on Twitter for a picture of the new feature and was rewarded with several wonderful shots courtesy of Terri who writes at Tales From The Juice Box on the Aerys Sports network. 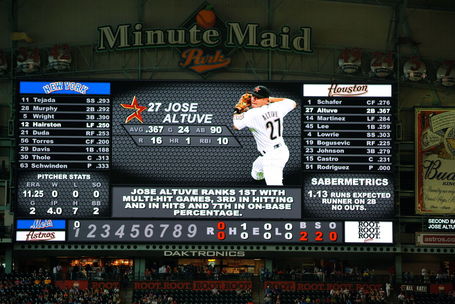 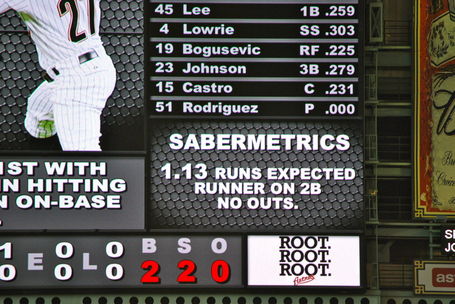 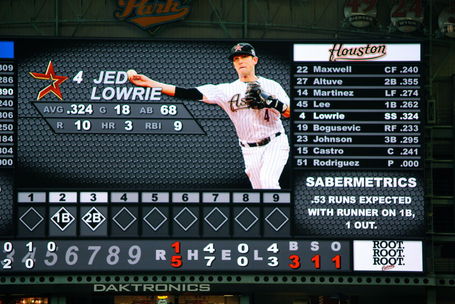 I don't know how I feel about the "Sabermetrics" title being right above it, because I think it will put off some fans, but it's nice to see the Astros doing something unconventional in regards to the information displayed on El Grande.

Run expectancy is something I've begun diving deeper into with my recent purchase of The Book by Tom Tango, Mitchel Lichtman and Andrew Dolphin. Essentially, each baseball situation has its own run expectancy, or average number of runs scored depending on the situation.

In the first picture above, with Jose Altuve the average amount of runs that scored, according to the book, is 1.13 in a no outs runner on second situation. So there's a good chance that a run will score before the inning is out.

In the Jed Lowrie picture you can see that run expectency changes when the situation changes. In that situation on average .53 runs would score with a runner on first base with one out. What the book does is give a run expectancy, or the average number of runs that scored, in any particular situation.

Look for a sabermetrics Tuesday article going more in-depth on run expectancy in the future.

3) Loud noises - I'm sure you're probably drained from the first two items, so I leave you with Carlos Lee and an Anchorman clip. From Wednesday's Zachary Levine's Houston Chronicle article:

Love that movie and I love that Z referenced it. I couldn't find a good clip of that scene, but I did found this which is fairly relevant: