1) Lance Berkman Hall of Fame debate - Can the dude announce his retirement before people start a debate that won't be settled for at least five years, and probably longer. If you haven't heard Lance Berkman was injured on a fairly routine play, involving his right knee. This will put him out for several weeks at the very least, it's likely that his season is done and his career may soon follow.

Dave Schoenfield already wrote a lot of what I'm going to say here about Berkman's Hall of Fame chances, so if you prefer him over me be my guest. As a writer for an Astros fan site I'm sure many are expecting to agree with Schoenfield and say Berkman deserves a Hall of Fame call. On the contrary, I just don't think Berkman has done enough.

Just comparing him to his predecessor Jeff Bagwell, who's had his own issues getting into the Hall, makes the point. Their triple slash lines and OPS+ are very similary, however, when you begin to dig deeper you see Berkman falls short on the counting stats votes love. 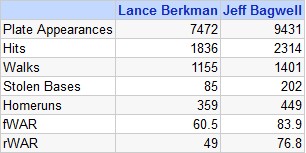 Look, I wanted Berkman to return to Houston next year and wrap up his remaining few season that would hopefully push him over that Hall of Fame finish line. Unfortunately, that looks highly unlikely now with the injury, and not just because of the injury. Next year the Astros don't need a 37 year old first baseman/designate hitter coming off knee surgery.

Even over looking the age and injury, Berkman has been a strong opponent to the American League, and more specifically the Designate Hitter, so it wasn't a given that he would return. However, it would be a great marketing move for the Astros and if Berkman does want to try and keep playing he may be destined for the DH role, and there wouldn't be any other better place for him than right here in Houston.

2) Jeff Luhnow scans tickets and goes unrecognized - If you entered through the South gate at Minute Maid Park on Tuesday you may have seen Jeff Luhnow scanning tickets for fans entering the game. If you want the full scoop with picture and video go see Alyson Footer's blog.

Apparently this was an initiative by the Astros organization to get some of the senior management staff out into the field for a couple hours to see what day to day operations are like for ballpark staff. So this isn't just a Jeff Luhnow going out on a whim, its taking an initiative and leading by example. Being a former military member I can't tell you how giddy this makes me.

I don't know who all falls into senior management staff, but I would love to see Sig Mejdal working the popcorn machine or Mike Fast working the grounds crew. If you spot any senior management personnel doing things around the ballpark be sure to snap a picture and send it to our email address at SBN.crawfishboxes@gmail.com and we'll highlight the photo (with credit of course).

3) Minor League promotions - We're beginning to get into that period where we start to wonder when we'll see some movement in the Minor League system. Several players have made spot starts here or there, but with the exception of Wes Musick there doesn't seem to be too many permanent moves taking place.

I wouldn't expect that to change anytime soon, with the draft coming up on June 4. That's not to say there won't be any promotions made it just seems with the Astros focused on the draft, Minor League promotions will take a back seat.

After the draft we might begin seeing more movement as the club begins to fill out its Greeneville and Tri-City teams and has a better idea on prospects based on evaluations. Even then there might not be a whole lot of movement, as the Astros have some new personnel in place in the front office and a new philosophy for us to decipher.

I would like to note that Wes Musick is making a very interesting under the radar Jose Altuve like climb through the system.