The Astros had a rotten week, and this is reflected in the Fantasy Statistics. This happens on occasion throughout the long season, and conclusions should not be drawn based on a team-wide slump. There is still much here to be happy about. 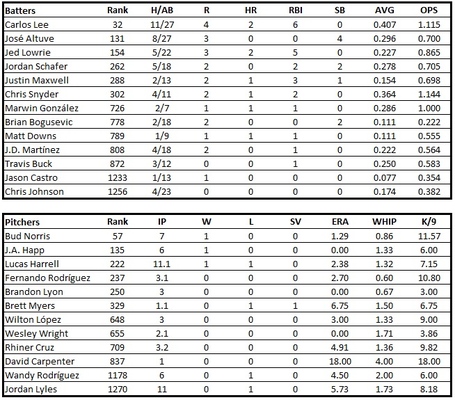 More after the jump...

Jose Altuve and Jed Lowrie were strong performers at weak Fantasy positions last week, as they have been all season. Ignore Lowrie's batting average - it's a small sample size abberation and all of his other stats were excellent. Any week that a fantasy manager gets two homers and an OPS over .850 from his/her shortstop should be considered a great week. Altuve's four steals were a performance that likely won his managers the SB category for the week, and with a good Average and OPS, his lack of other counting stats should be disregarded.

Bud Norris was finally the pitcher we've wanted to see over the past week. He had a dominating start with a sub-1.00 WHIP with nine strikeouts and only two walks. Happ and Harrell also posted usable fantasy lines, particularly Harrell who stayed under 2.50 ERA with a K/9 over 7.00 for the week.

None of the relievers were given an opportunity grab any saves, though if you had Fernando Rodriguez in your RP spot you were rewarded with some nice stat-padding numbers.

Lee has maintained a high batting average all season with a Fly Ball % that is almost ten points below his career average. Look for that statistical oddity to be corrected and play Lee in your outfield or 1B spot with confidence. His counting stats (RBI, HR, R) will begin to catch up with his already excellent calculated stats.

Staple this on your forehead, lest you forget: Do not remove Altuve or Lowrie from your lineups. There are not five other 2B's performing better than Altuve in fantasy leagues right now, and there are not five shortstops outplaying Lowrie in the last thirty days. Ride those horses until they can be ridden no longer.

Keep an eye on Jordan Schafer's injury. If he's healthy, he's a useful source of runs and steals, but not much else. Offensively overall, the Astros have the Cubs and Dodgers this week. J.D.Martinez should stay on your bench for now, and shame on you if you are rostering Jason Castro. I'm holding on to Chris Johnson, even in the face of his terrible week; Third Base is very shallow, and CJ could rebound against weak pitching this week. Outside of Clayton Kershaw, nothing about the pitching rotations or relief corps's (corps's? Corpsi? Corpses?) should scare fantasy owners.

In the Rotation: Start Bud Norris! He's a two-start pitcher and neither the Cubs nor the Dodgers have a fearsome lineup (Matt Kemp is still hurt). Also throw Wandy in there with confidence. If the pitching matchup is favorable and you're in a deep league, Happ and Harrell should be considered emergency starters for a couple more weeks. Maybe in a couple weeks if they continue performing well I'll feel better about recommending them to anybody except for leagues with insanely deep pitching.

Sadly, right now Brett Myers is the only rosterable relief pitcher. The others are just too volatile.

In The TCB Leagues...

The Crawfish Boxes - My lead is expanded to 12 games in front, built on my rotation of Halladay, Gonzalez, Hellickson, Kershaw, and Lynn. My offense is actually not very good, which is opposite of how I usually draft. Irritatingly, this league is my only auto-draft...what does that tell you? Win of the week is Impossibles over Juvenile Court Clerk, with a 11-1-0 pounding built on 11 RBI from Jonathan Lucroy and two wins from Josh Beckett, who posted a 0.61 ERA in two starts.

TCB Baseball Madness - I was dethroned after only 1 week up top by Joe Morgan's a Fool, who beat jello. Win of the week was Killer Bee Boppers, who trounced AlwaysSunnyInSeattle 11-1-0 using ridiculous pitching and consistent offensive performance from his whole team (nod to Justin Upton for .304-6-1-5-3-.886).

Boxes O' Crawfish - In full disclosure, I am in 15th place in this league. I can't buy a win. Astros don't suck is in 1st place (is that an omen?). Best win of the week goes to The House, who slapped down Wild Haze 9-3-0 after J.P. Arencibia's ridiculous .360-7-4-10-1.305 week and two starts of shutout baseball from Clayton Kershaw. Neither of these teams appear to be paying attention though, as between them they sport 11 players who are either on DL, not in the majors, or have a blank roster spot. GET WITH THE PROGRAM! And yes, both of these teams are ranked higher than I am.