Scouting The At-Bat: Wandy, Josh Hamilton And The Infield Shift

Share All sharing options for: Scouting The At-Bat: Wandy, Josh Hamilton And The Infield Shift

In the third installment of this random series, we're going to look at an interesting moment, this time from the pitching side.

Let's set up the situation. It's the top of the third in a scoreless game for the Houston Astros. Left-handed starter and staff ace Wandy Rodriguez is on the mound. He had given up a leadoff double to Ian Kinsler, but got Elvis Andrus to ground into a double play on a comebacker.

That brings up Josh Hamilton, one of the hottest hitters in the game in a pretty critical situation. What is Wandy to do? The crafty lefty had already done a pretty good job of inducing ground balls to that point and the Astros clearly wanted Hamilton to do the same.

That explains the pretty dramatic shift they gave to him, moving shortstop Jed Lowrie over to the first base-side of second. It was pretty much the opposite of what they'd done successfully to Corey Hart two nights previously, as Jose Altuve had made the shift to the other side of the keystone and Hart had grounded out to Lowrie in the hole.

What was Houston expecting in this situation? What was Hamilton expecting to see from Wandy? How was it all supposed to play out and did it work that way? Let's answer some of those questions after the jump...

Hamilton hits ground balls about 42 percent of the time, for his career. In 2012, that number is down slightly to 40 percent, but a change that small is pretty negligible. As you can see on his spray chart since 2010 (thanks to Texas Leaguers), he hits his fair share of ground balls to both sides of the infield, which doesn't necessarily indicate whether he should get the kind of shift Houston put on.

But, wait, there's more. How does Hamilton do against left-handed pitchers?

So, we can see Hamilton hits a ton more grounder to the right side of the infield when he's facing left-handed pitching. There are a few hits to the left side, but statistically, the chances of the hit going to the right side was much, much bigger.

Thus, the shift was deployed. Now all Houston needed to do was get that ground ball. Since Wandy was feeling his two-seamer in the game, already inducing ground balls, it stood to reason that's the pitch he'd want to use. How did Hamilton do against the two-seamer from left-handers? Again, to the spray chart.

Lots and lots of grounders to the right side. But, there are plenty of hits to the outfield and a few home runs. Placement, then, may be key. What did Hamilton swing at when he saw sinkers?

He pretty much swings at anything near the middle of the plate. So, don't throw it down the pipe, if you want to avoid him denying your grounder hopes. What does he lay off?

Sinkers low and away are not Hamilton's favorites. As you can see, there was some overlap on the pitches he took and the ones he swung at in that area, but for the most part, he decided to take that pitch rather than try and do little with it.

So, the safe thing for Wandy would be pound that outside corner with his sinker to try and get a grounder to the right side.

Of all the pitches Hamilton has seen to start a count from lefties since 2010, he's only seen 41 two-seam fastballs. In case you're worried about classification issues, another 19 were called sinkers, but that's still just 60 total pitches when he's seen about 300 four-seam fastballs and sliders on that first pitch.

But, Hamilton wasn't facing anyone. He was facing Wandy Rodriguez. What could he expect from the left-hander in this game?

We can break that down further, though, as we isolate just against lefties. In that case, the curve spikes up to 40 percent usage, followed by the two-seamer going up to 32 percent and the four-seamer dropping to 20 percent.

Want more? On 0-0 counts, Wandy is most likely to throw his four-seamer (about 35 percent of the time), followed closely by his two-seamer (30 percent).

What's more, in that particular game, Wandy had thrown mostly two-seam fastballs and relatively few four-seamers. So, Hamilton could go up to the plate with a pretty good idea he's seeing a fastball first, and probably a two-seamer.

That's exactly what Wandy threw, but he jammed Hamilton up and in with the pitch. 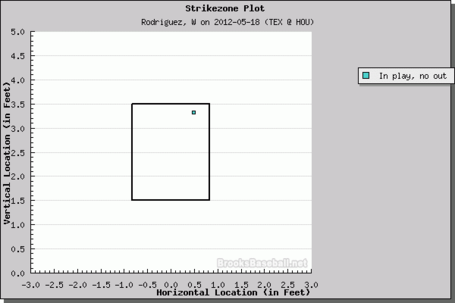 Hamilton took that pitch, went inside out on it and shot the ball to the left of second and into left field, defeating the shift and allowing Kinsler to scamper over to third. It was a good pitch, in a good location and Hamilton just beat him. Did he anticipate getting the fastball?

After the game, Wandy took a similar approach, saying, "What can you do? We made the pitch we wanted, we had the shift and he just beat us." Looking at all the evidence, it appears that's exactly what happened.