I recently spent four days in Lexington watching the Legends in action, and I was able to talk to Pitching Coach Dave Borkowski about his pitchers. It was a fast and furious ten minute interview, but I was able to at least touch on the entire Legends pitching staff. Let's look at what he had to say about five of his relief pitchers. 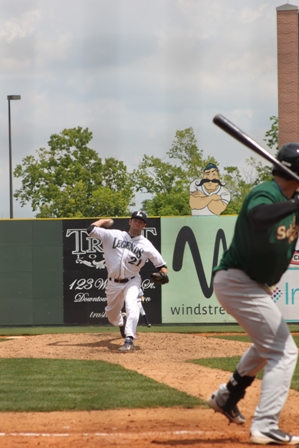 I asked Borkowski who his most reliable relief pitcher was and I was not surprised to hear Jason Chowning as his answer. Chowning has a 0.00 ERA and a 1.125 WHIP with three saves through his first nine outings. "You know what you're going to get out of him. No situation phases him." When I asked why he hadn't been promoted yet, Borkowski told me that they were looking for Jason to trust his fastball more to get outs. He went on to say that just because he started the year in Lexington didn't necessarily mean that he would finish the season there.

Borkowski described Dayan Diaz as being "young in pitching." Although he has great fastball life (and one of the best fastballs on the team), he needs to refine his command and his breaking ball, but as Borkowski put it, "The arm works well." I would say it works well as evidenced by the 0.49 ERA and the 0.873 WHIP. In response to a question about his best fielding pitcher, Borkowski cited Diaz without hesitation, and actually said that Diaz might be the best fielder on the team period.

Murilo Gouvea, the lanky Brazilian righty, is someone that I didn't have much information about so I was particularly interested in hearing what Borkowski had to say about him. Gouvea has good fastball life but his curveball is his bread and butter. "It's nasty. It's 12-6 and it's really untouchable when he's got it on." Over 15.1 innings, Gouvea has a 4.11 ERA (mostly due to three home runs allowed) and a 1.239 WHIP with 19 strikeouts to only four walks.

Nathan Pettus doesn't have the greatest numbers on the team (6.46 ERA and 1.696 WHIP), but he is still working his way back from Tommy John surgery. He is currently working long relief because he missed so much time due to surgery and they need him to get the work. He lives on his 2-seam fastball with sink on it.

A 19-year old lefty with a projectable frame, Evan Grills opened some eyes between last year's instructional league and this year's spring training. Borkowski was somewhat animated in discussing Grills as someone who wasn't on anyone's radar screen, but "works his butt off, and he competes and he wants the ball every day" with an outstanding attitude. He currently has a 3.29 ERA and a 1.463 WHIP. I was rushed for time and didn't discuss Grills' specific pitches with Borkowski, but you can see what David Coleman had to say about him when he was drafted.

There have been some issues with starting pitching in Lexington, but the relief corps has proven to be quite strong. Mike Foltynewicz told me that he had no qualms in turning over a one-run lead to this staff. I like this group and, In my opinion, Folty knows what he's talking about.

For more information on the Astros minor league system, please visit What the Heck, Bobby? or follow me on twitter @whattheheck57.