Today I find myself in the passenger seat of a vehicle headed southbound through the hills of Kentucky, en route to a family vacation in Nashville. This leads me into the topic of this article: Chris Johnson, the Third Baseman of the Houston Astros. Several things relate Johnson to the beautiful state of Kentucky, including:

Now that I’ve established the relevance of my current location with the topic of the day, I shall proceed.

Thus far in his career, Johnson has followed a path that is common among young major leaguers. He began in 2010 with a performance worthy of Rookie of the Year consideration (.308, 40 Runs, 11 HR, 52 RBI, .818 OPS in 341 AB). Astros fans immediately proclaimed Johnson as the Third Baseman of the Future—a paragon of greatness destined for hot corner glory. But the sabermetricians cried to the heavens, "Wait, ye plebes of uninformed old-school-itude! Johnson’s BABIP is a veritably unsustainable .381! Regression is in order to restore balance to the universe!" History proved the database junkies correct, as Johnson’s comet crashed to earth in a messy splat in 2011, prompting a demotion to Triple-A ( .251, 32 Runs, 7 HR, 42 RBI, .670 OPS in 378 AB). The once-adoring fans grabbed their torches and pitchforks, ready to run their former hero out of Houston on a rail. Going into 2012, Johnson was public enemy number one on the Astros and SB Nation message boards. The armchair experts bemoaned his appointment as the opening-day third sacker. Women tore out their hair and the men gnashed their teeth.

Then, Johnson opened the season hitting .300, with an .800 OPS in 120 AB. During the month of April, he performed like one of the top Third Baseman in the majors. Thus screams the sabermetrician: "He has a BABIP of .381 again!"--only this time, they seem more hesitant. How did Johnson return to a high BABIP after dropping to only .317 in 2011, when league average is .300? Their universe is rocked.

After the jump, I’ll try to determine what’s changed from 2011 and explain Johnson’s return to success.

Using the Magic of Pitch F/X we can get a sense for how pitchers are trying to beat Johnson. Like most non-superstar players, Johnson struggles with pitches low and away. The chart below shows all of his swinging strikes in 2011 and 2012 so far. Unsurprisingly, most of the whiffs are around the bottom outside corner of the strike zone. 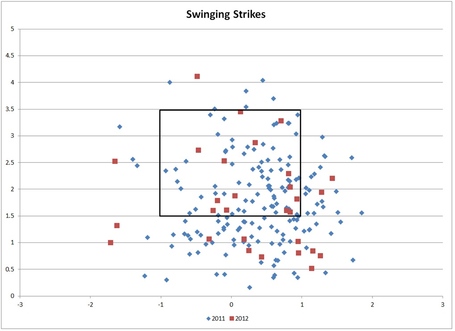 The data shows that 74% of these swinging strikes are on breaking balls (sliders, curveballs, sinkers) and changeups. Pitchers recognize Johnson’s tendency to swing and miss at these pitches relative to fastballs (26%) and adopt their strategy accordingly.

This chart is heavily weighted towards 2011--124 pitches in 2011 and 24 in 2012. This ratio of pitches Johnson whiffed on (20:1) is almost identical to the ratio of total pitches seen (1451:291). This indicates that pitchers have not adjusted their attack plan against Johnson in 2012. In fact, Johnson is seeing more breaking balls than in 2011, but swinging at fewer of them. More on that below.

Now that I’ve ruled out pitcher approach as the reason for Johnson’s success, let’s spend a moment discussing BABIP, or Batting Average on Balls in Play. The gist of the stat is "What percentage of balls put into play by a hitter (or allowed by a pitcher) fall for hits instead of turning into outs." BABIP can be heavily affected by opponent defense, among other things. Amateur baseball nerds like me usually mistaken BABIP as a measure of Luck. While Luck contributes a bit, measurable factors that depend on a player’s skill have a larger effect. The equation for BABIP is below, thanks to Wikipedia.

According to a Middle School Pre-Algebra textbook, BABIP will increase as the numerator (the top of the fraction) increases with respect to the denominator. Here are some factors by which a player may influence his own BABIP: 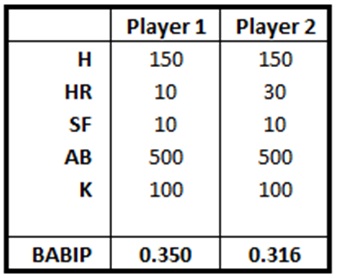 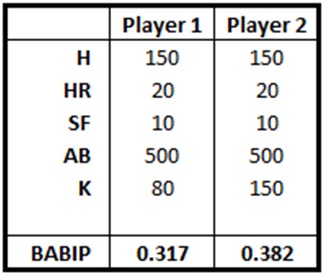 Johnson’s demonstrated skills are those of a high BABIP player. He has a contact rate around 80% for the last two seasons, and usually strikes out in about 25% of his Plate Appearances. He is not a typical power hitter and probably will never top 20 HR, even at his peak. His current (and 2010) BABIP of .380 indicates that he’s playing over his head, but it is not a stretch to think that Johnson could sustain a BABIP between .320 and .330.

Earlier this week, commenters on this website called for Jimmy Paredes’ return to the majors to replace Johnson in the lineup. Stop it. Paredes is having a nice little season at Triple-A, but he sports a 2.9% BB rate and an OBP of .319 with a BABIP of .370. I will throw something at a wall if somebody says he will play better than Johnson in the majors this season. There is a gaping Pacific Ocean of a difference between Triple-A and Major League. Paredes does not have the tools to sustain as high a BABIP as Johnson can (Paredes strikes out very little and only has a contact rate of 70% during his time in the majors). This means that while Johnson's BABIP will come down a little from it's current value, Paredes' definitely will drop even further.

Johnson has earned his stay in the major leagues this season, and benching him in favor of Paredes right now would be irresponsible, pointless, and detrimental to the club’s winning percentage, Johnson’s trade value, and Paredes’ development. Just stop it. The next time I read somebody decrying Johnson in favor of Paredes, I will slap them with a fish.

So has the increase in BABIP from 2011 to 2012 (and thus production) been due to Luck, or to some adjustments that Johnson has made?

The best way to improve production is to consistently beat the pitcher’s strategy for getting you out. Revisiting the Breaking Ball swinging strikes from earlier, we see that Johnson is making much better contact against Breaking Balls in 2012 than he did in 2011. Any number of things could cause this, including recovery from nagging injury, renewed focus, or better recognition of major league pitches.

This chart shows that pitchers recognized Johnson’s tendency to whiff on breaking balls in 2011 and have thrown him 7% more in 2012. Johnson meanwhile is missing 3% fewer breaking balls than he did last year. Improved success against his "out pitch" certainly helped to improve his numbers in 2012. For what it’s worth, Johnson only whiffs on 4% of fastballs, down from 6% in 2011. Pitchers will continue with their strategy regardless of incremental improvements.

The data shows that Johnson is swinging at a much lower percentage of pitches in 2012 than he did in 2011. This is consistent with his comments in Spring Training that he was pressing in 2011, trying to do too much. A decrease in swings usually points toward being more selective with which pitches he swings at. As a result, though his Contact % per pitch predictably goes down (obviously, if he’s swinging at fewer pitches, his contact rate per pitch will go down), his contact rate on pitches he swings at has gone up to 79%. This can almost entirely be explained by his improved contact against Breaking Balls, shown above.

This brings me to my favorite stat, Positive Outcomes Per Pitch (POPP – mostly my favorite because I made it up, though I won’t claim to be the first person to use a stat like this...I just came to it through my own number crunching instead of looking it up in somebody else’s database). A direct result of better plate discipline, approach improvements, luck, or what-have-you is an increase in the number of positive outcomes generated by that hitter.

I like to break down stats by pitch because a lot of granularity is lost when entire Plate Appearances are considered. I define a Positive Outcome as a hit or an RBI. Note that POPP completely disregards walks, which is impacted by selectivity but not contact rate. So POPP measures success on pitches that a hitter chooses to swing at. I break it down to swings-only using "POPS", or Positive Outcomes Per Swing.

As I’ve explained before, increasing one’s POPP from 7% to 9% could be the difference between a 80-RBI hitter and a 100-RBI hitter. But even more impressive in Johnson’s case is his 7% increase in POPS, further indicating that he has been more selective on which pitches he is swinging at, and a higher percentage of "luck" hits have landed this year compared to last. Regardless of the reason, it’s an impressive jump and has everything to do with Johnson’s success in 2012 relative to last season.

To summarize, here are my conclusions from analyzing the data comparing Chris Johnson’s 2011 to 2012 to date: