Spring Training With The Astros, A Fans Journey - Part 3

Share All sharing options for: Spring Training With The Astros, A Fans Journey - Part 3

You can read part one and part two here.

After scrounging up some lunch consisting of Subway, the wife an I headed back to the backfields of Oseola County Stadium to take in a Minor League game or two.

I got the impression that these were the first Minor League games of Spring Training to be played. Previous to that it sounded like workouts were exactly as the sign had said, from 10 a.m. to 2 p.m. The games were held on fields three and four, so close that I watched a field ball leave field four and land near the pitching mound on field three. The Astros Minor Leaguers were taking on the Detroit Tiger Minor Leaguers.

Here's a quick video of play on field four:

Field three appeared to be where the most advanced Minor Leaguers were playing. I watched Humberto Quintero and Telvin Nash hit doubles on that field. Shortly after we arrived I saw a hated figure come sit down in the bleacher to our left. I recognized him instantly as Larry Dierker. As I explained the significance of Dierker to my wife, another figure came and sat down next to Dierker and started up a conversation. 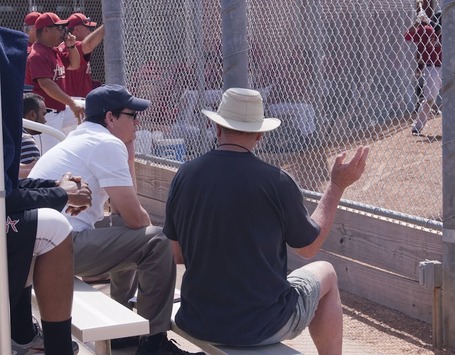 Now I had seen, and even passed, this figure earlier in the morning but could never quite recall who he was or where I had seen him before. Suddenly it clicked, Sig Mejdal. Yes, the Director of Decision Sciences talking to Larry Dierker was happening just 10 feet away from me.

Explaining the Director of Decision Sciences to my wife was a bit more challenging than how Larry Dierker related to the Astros.

On field four I saw Delino DeShields Jr and a lot of other names I didn't recognize. We spent a majority of our time at field four because of the wall of shade and also there was room available in the mini-bleachers.

It felt a bit surreal to have Burt Hooton, watching the game, sitting 20 feet to my left and Stubby Clapp 20 feet to my right, managing the game. In this DeShields at bat you can see Ty Van Burkleo, one of the Astros coaches, walk right in front of my camera twice. At one point even Craig Biggio walked in front of me, that's how close you are to the action:

Along with all the coaches roaming between the two fields were Minor Leaguers not participating in games. Some were trying to find shade under the small trees, while others were hanging out at the wall of shade. Most were in the bleachers either keeping notes, working the radar gun or watching the game. By some of the expressions I'm assuming their presence was a mandatory thing. They weren't wearing there jerseys anymore so identifying them was difficult. 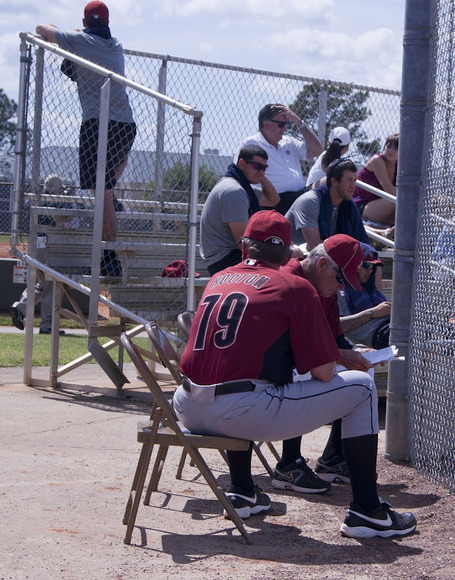 Besides players there also appeared to be family members, organization personnel and one or two scouts populating the bleachers.

If you've got a score book I would bring it to keep track of the game, because you won't be able to otherwise. Also, sunblock gobs and gobs of it. We left early because we didn't put any one and I started smelling burning flesh. The morning wasn't so bad, but for the afternoon I would highly recommend it.

I'll leave you with one other thought, before moving onto Sunday. You know that pickoff play where the pitcher fakes to third then looks first, I saw that work for the first time in my life. It went against the Astros. With Matt Duffy at the plate the Tigers pitcher faked to third and then threw to first picking off the runner.

We arrived at the park a little early to walk around and see what the Astros had to offer at the park. It wasn't much but it kept us entertained until the game started.

After paying seven dollars for parking we were directed to park in the field directly adjacent to the ballpark. After gathering our things to head into the ballpark we were handed two raffle tickets to participate in some sort of car voting contest. Several nice looking cars, mostly Corvettes, were parked outside the stadium. 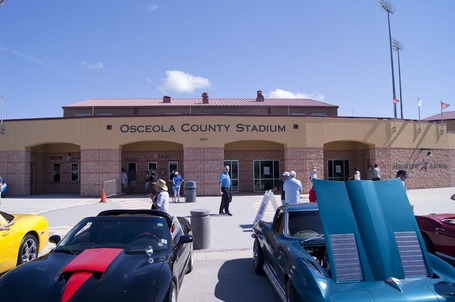 The wife and I each chose a car we liked and dropped our tickets into the cars cup. She chose the yellow one 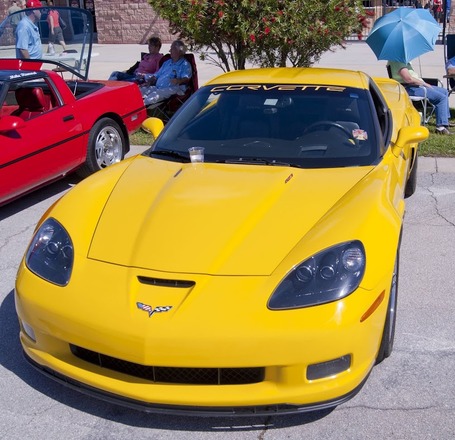 and I chose the red one. 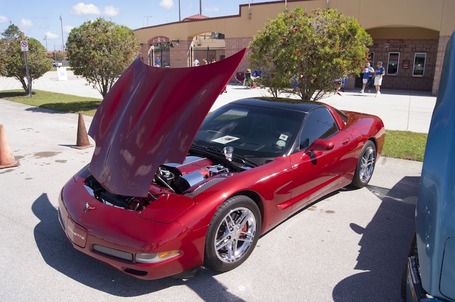 Entering the facility wasn't any problem, a simple bag check and we were in. The stadium is well laid out and simple. You only have two options to choose from, left or right. Going right leads to the "food court" and the kids playground. Going to the left leads to the gift shop, auction tables and the player signing lane down the third base line.

Gatorland happened to be there allowing fans to hold and take pictures with a small alligator. After contemplating the idea of holding a gator we instead decide to hit the gift shop. 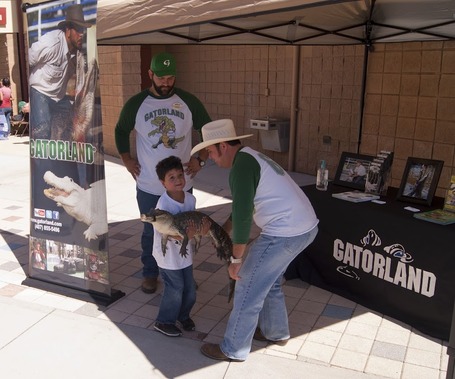 Before entering the gift shop you may recognize this boot, which had several people posing with it. 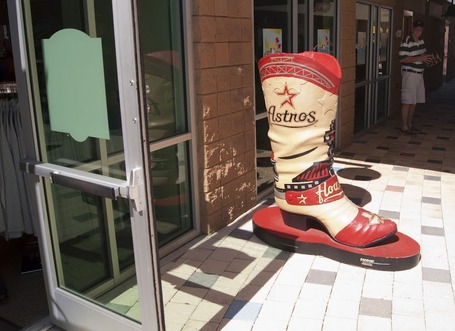 In the gift shop are things you would expect a gift shop to hold: Toys, shirts, stuffed animals and other little knick knack things. We ended up being five shirts and some stickers, resulting in a bill over 100 dollars.

Spending over a 100 dollars qualified us for two free Spring Training tickets for a future date at a non-premium game. If you're planning on hitting up more than one game in Kissimmee and plan on getting some souvenirs keep that in mind, but also realize this deal may change in 2013. The box office closes at 4 p.m. so we decided to grab the tickets before the game started.

Leaving the facility was simple, get a stamp, make sure you have your ticket stubs and head on out. After grabbing our tickets we headed back in and ventured further left, where the auction table was. At the table were several Astros items for auction as well as some non-Astros memorabilia. I found the infamous Michael Borne signed jersey that I swear I've seen somewhere else.

Most of the good memorabilia, and the most expensive, came from former Astro players, Lance Berkman, Hunter Pence, etc. I had my eye on an Adam Everett signed picture that had a minimum bid of 30 dollars. Passing on it at the time, I came back to the table when bids were closing up and the guy was announcing that anything with a minimum bid would win the item. The Everett picture still didn't have a minimum bid and I strongly considered buying the image, but ultimately decided against it.

There's not a bad seat in the house, some areas are better than others, but overall you've got a good view of the field. 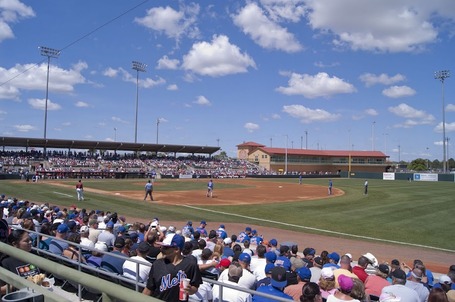 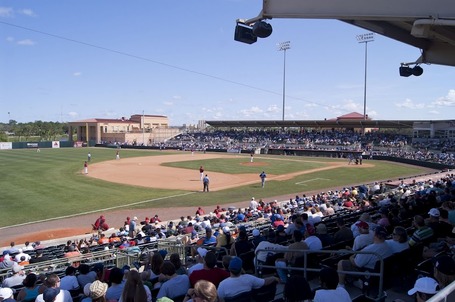 The best seating is anything on the second level near the top. You have an elevated view of the field, but more importantly that's where the shade is. We did not have seats in the shade, in fact we were in one of the two sections that didn't have any kind of shade. Stay away from 220 unless you need to work on your tan. Luckily I remember my sun screen that day. 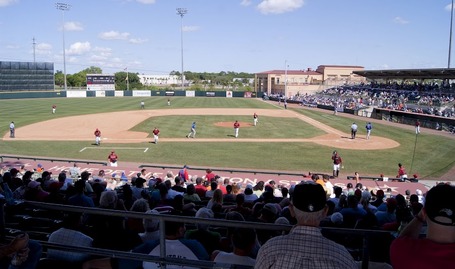 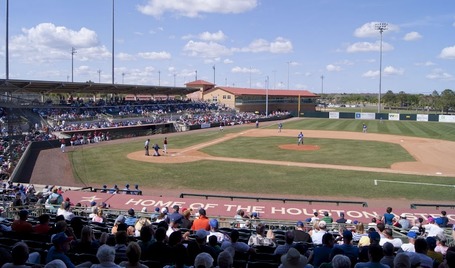 The spots under the shade sell pretty quick, so get them in advance or prepare to get to the ballpark early.

I had chosen 220 to get a good luck at right field, keeping in mind the competition for that spot. 201 is the other section with out some sort of over-hang. Travis Buck graced us with his presence and we had a good view of the diving play that Jordan Schafer was injured on.

After several innings we decided to wonder around the stadium a bit to view some of the other areas of the ball park. We walked around the back side of the field and headed over to the third base line where players exit, when they're done for the day. 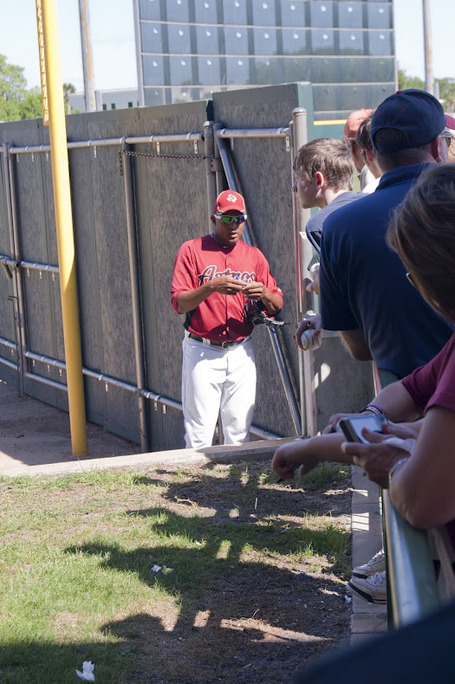 This is the area you've been told about by several other blogs on where you need to be for autographs. Even plays who aren't in the game may show up there. I realized this a moment too late as Jose Altuve was walking off after signing a few things. There wasn't even that big of a crowd either. 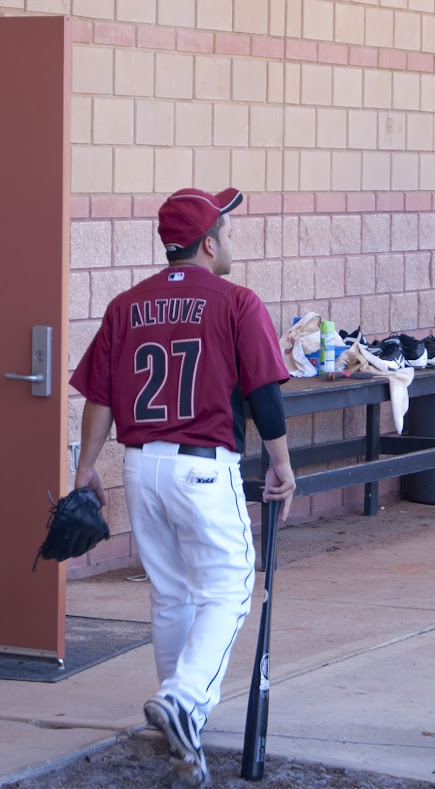 After hanging around the third base patio a bit I wandered to the upper levels of the stadium where I caught a nice breeze. As I mentioned earlier there isn't a bad seat in the house and that includes standing up there with the shade and nice breeze. In fact I almost preferred it to our seats, due to being able to see the whole field.

One of the things I've noticed lacking at the Astros Spring ballpark that most other ballparks seem to have is some sort of grassy knoll that families can come out and hang out on. Aside from the playground there really isn't a great place to bring kids of a younger age who lose interest in the game after the first few innings.

As a parent preparing to introduce my daughter to baseball, some sort of area where my daughter can run around but still be exposed to baseball would be fantastic. It's something I think could be improved at Osceola County Stadium.

On the drive back home the wife and I began making plans for next year. With the great experience we had in 2012 we definitely plan to make traveling to Florida an annual vacation. We may even bring the little one next year, she may not care for the baseball but that's what Disney World is for.

For more pictures from the trip you can check out the album for this entry here.

And the album for entry two can be found here.