Spring Training With The Astros, A Fans Journey - Part 2

Share All sharing options for: Spring Training With The Astros, A Fans Journey - Part 2

With the Astros in Tampa Bay taking on the Yankees and the game being standing room only, the wife and I decided to forego the two and half hour drive to Tampa and instead check out the workouts on the backfields of Osceola County Stadium. On away games workouts are open to fans from 10 a.m. to 2 p.m. and closed during home games. When Minor League Spring Training games start you have the opportunity to attend those.

The Minor League games appear to start at 1 p.m., at least that's what time it started the day we were there. I think this changed the schedule a bit for the workouts because the players headed to the locker room at 11:30 for lunch and we were told wouldn't be back on the fields until the games started.

The parking and entrance to the workouts is to the left of the stadium. There are signs that will be pointing to the workout entrance and one that says "Fan Entrance For Workout." 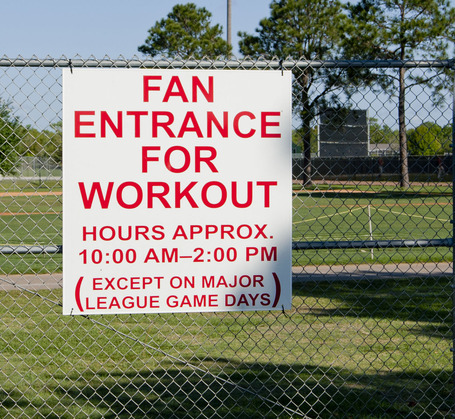 After walking down the path leading into the fields we ran into Bob one of the Astros attendants and he was gracious enough to give us the low down on what was allowed and what wasn't allowed. Bob was kind enough to explain all this to me on camera:

The minute I stepped onto the backfield grounds I knew I wasn't in Kissimmee anymore, this was heaven.

Jogging between fields were all the Minor League players we've discussed at length on this site: Ross Seaton, Paul Clemens, Josh Zeid, Brett Oberholtzer and many many others. 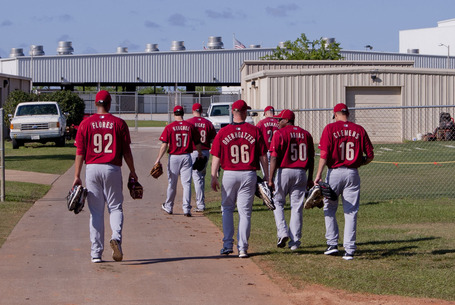 I was so close I could of pinched them for not wearing green on St. Patrick's Day. I thought better of it because I didn't want to disturb them, but also because I wasn't wearing green either. 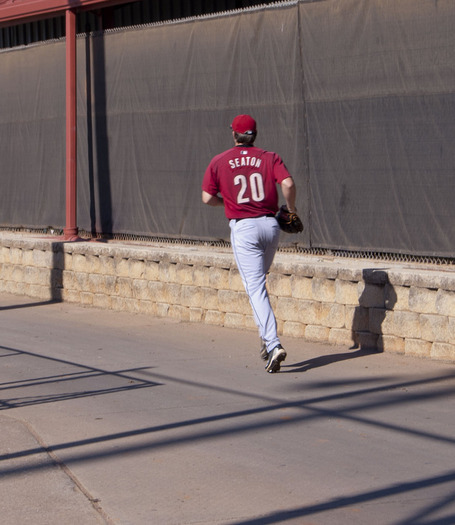 On the fields batting practice, fielding and pitching drills were being conducted. 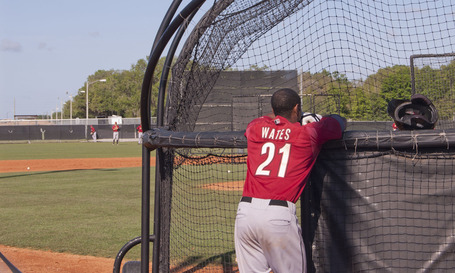 The Astros have four main fields that they workout and play simulated or Minor League games. There are a few small three row bleachers near homeplate that you can sit on and take in the workouts or a game. 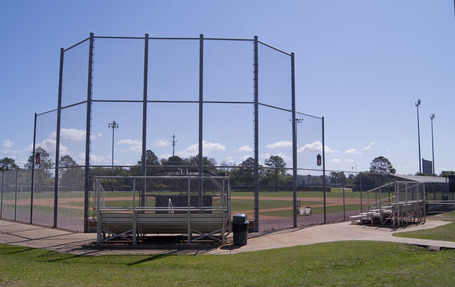 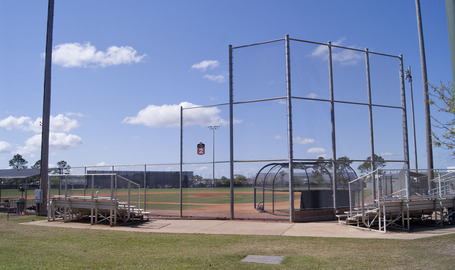 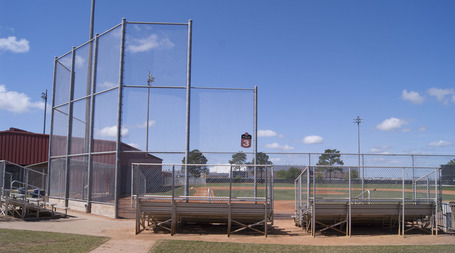 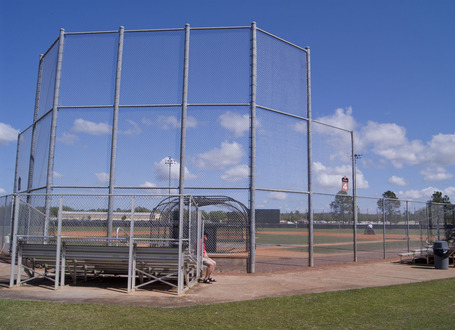 In the center of the four fields is the locker rooms and more importantly public bathrooms.

They also have an indoor batting cage and bullpen areas that are off limits for obvious reasons. 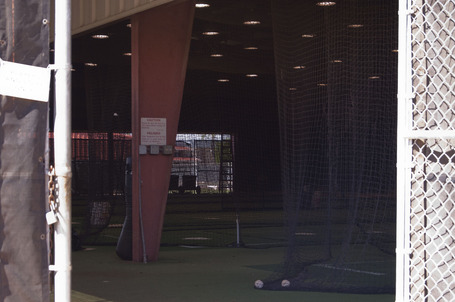 Here's a short video walk-through of getting to the backfields of Osceola County Stadium:

If you're planning on staying for an extended period of time sunscreen is a must, and a small fold up chair wouldn't be a bad idea either. There's not much shade to be had about half of it is under small trees, and the other half is near field four. That spot is quite possibly the best spot for fan, not only does it provide shade and give you a decent view of field four, but it also is where one of the locker room entrances is located.

One of the first things you'll notice about the backfields is card sellers, there seemed to be a lot of them. You'll recognize them by the huge binders they're carrying and they're usually camped out near one of the locker room entrances. 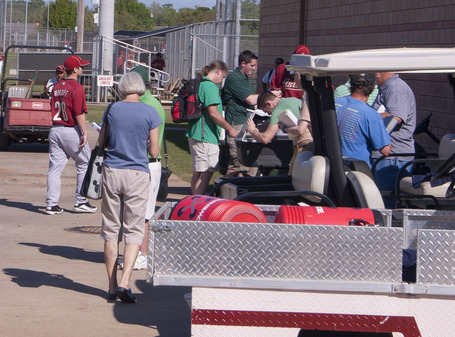 Not everyone was a card seller though.

There were a handful of Astro fans there getting autographs and pictures including fans from Corpus Christi and Tri-City. I hate to say this but it almost has the feel of a petting zoo, without any of the petting of course. It was pretty clear when the players were on the field or heading to a field they were off limits. However, when they went near the locker room, and if they were identified they would be asked to sign something.

The players who were asked the most were the high profile guys: Adrian Houser, Jack Armstrong Jr., Delino DeShields Jr. There were also some names I would expect only hardcore Minor League Astros fans to know. Jonas Dufek, Nick Tropeano, Brad Propst were among several of the players asked for autographs. 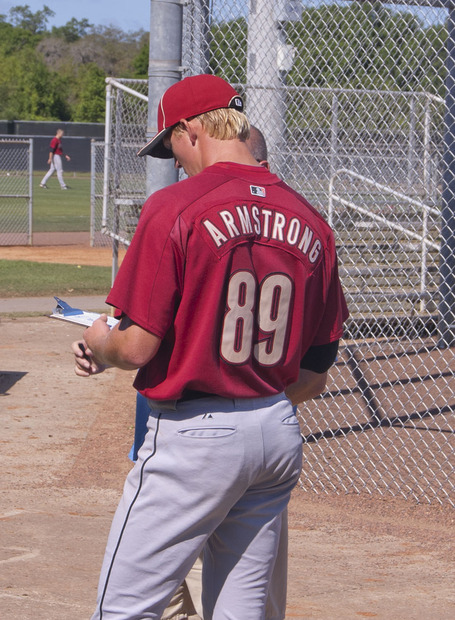 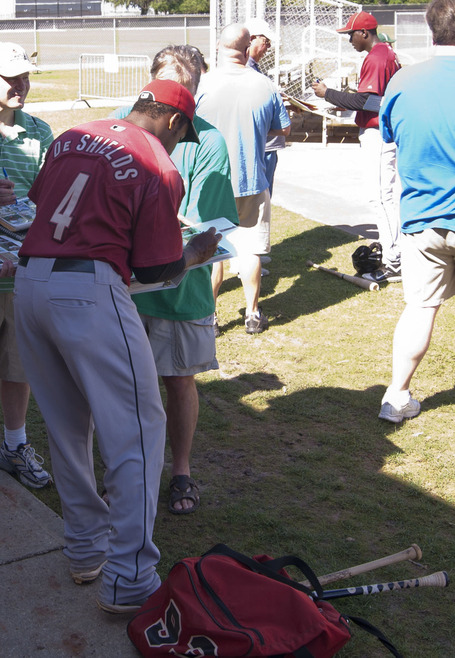 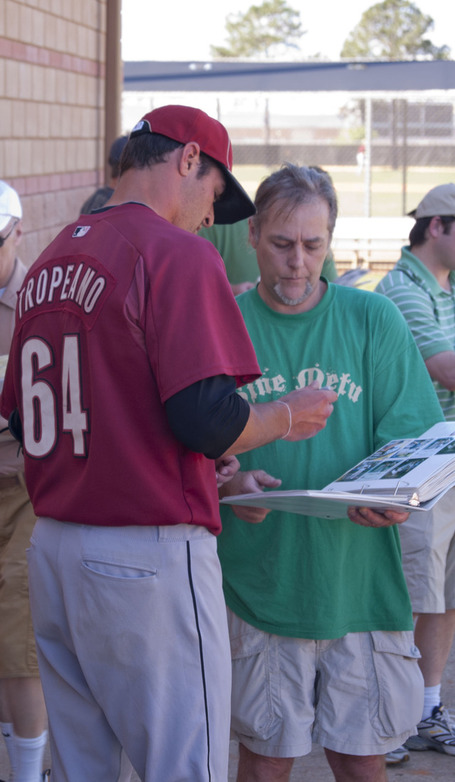 All the players were accommodating to autograph requests, even signing multiple cards for the card sellers. I only grabbed two because I didn't want to be that guy and to be honest I was a little bit nervous. I was also amazed at the amount of access I had and was just trying to take it all in. I expected a defined area to stand in that wouldn't be anywhere near these guys and instead I'm close enough to high five them. 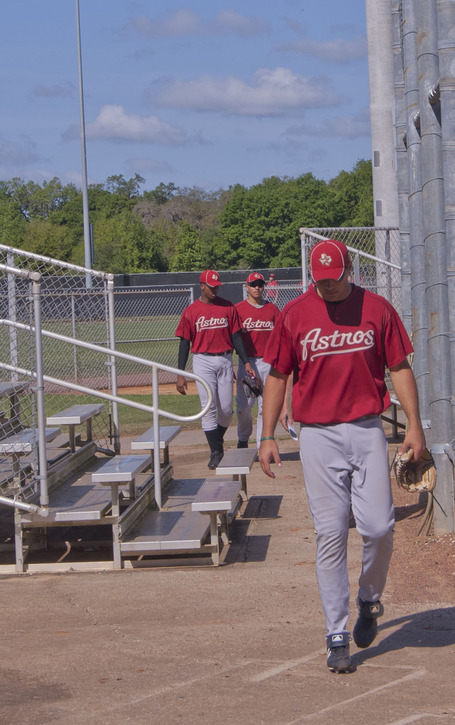 After getting a lay of the land I headed over to field one where several of the Astros Major League pitchers were taking batting practice. Jordan Lyles, Zach Duke, Kyle Weiland, Henry Sosa and Livan Hernandez were all standing around the batting cage. As I took a seat in one of the bleachers I got a quizzing look from Hernandez, who was exiting the batting cage. Sosa stepped into the batting cage, took a pitch and was immediately harassed by both Hernandez and the coach throwing batting practice for letting that pitch go by. This started a humorous back and forth that I missed capturing on my video camera by only moments. Shortly after that exchange the group of players wrapped up batting practice and headed towards the main stadium, where I'm assuming their locker room was located. 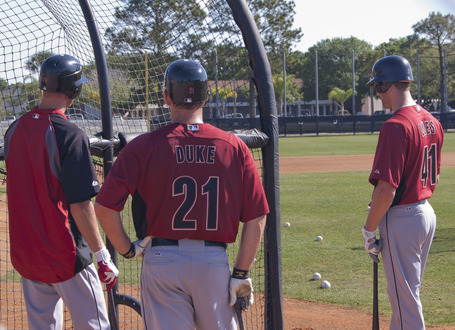 As workouts ended what started as a trickle of players heading towards the locker room suddenly became a flood of players. To avoid getting run over I took a few steps forward and just bathed in their essence, peeking back to try and catch some of the names on the back of the jersey's. 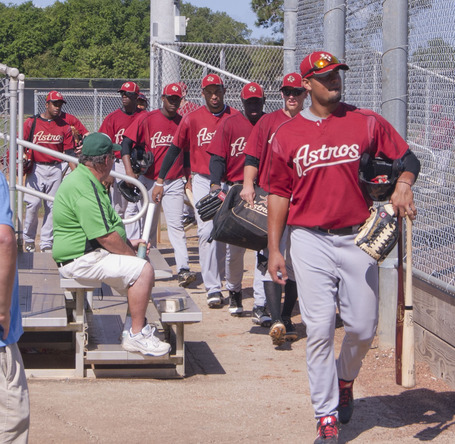 After the flood subsided I spotted Biggio signing autographs for a couple of fans. Despite my nervousness, that was one signature I wasn't going to give up. I quickly headed over to him cursing myself for not bringing the number seven jersey I had decided to leave at the hotel. Handing him the sharpie and the golf ball I wished him to sign I suddenly realized I had made a rookie mistake. I had left the cap on the pen and hadn't had it ready for him to sign my golf ball. With the quickness that made him an all-star second basemen he quickly removed the cap, signed the ball and briskly entered the locker room. 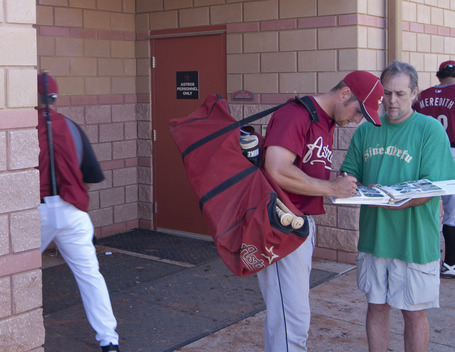 A sense of accomplishment washed over me.

You see up to this point I had never gotten a signature from any athlete, and the only signature my family had gotten, from a baseball player, was a signature my brother got was from Michael Tucker of the Kansas City Roayls, in the mid 90's.

I handed my wife the ball to let it dry before I stored it in my bag. It probably would of been fine to store right away, but I wasn't taking any chances. That's when I looked up and saw George Springer as one of the last players heading into the locker room. I don't know if he had already been hit up by everyone there or if he had just been lingering to let the other players get picked off before he headed in, either way I wasn't passing this opportunity up. So I urgently grabbed another ball and quickly headed over to him. I asked him to sign one more ball and he was gracious enough to do so.

That concluded the festivities for the morning. We were told the ball players would be eating lunch and then returning to the field for a 1 p.m. game against the Detroit Tiger Minor Leaguers. It was 11:30 at that point, so we decided to break for lunch and return to the fields for the afternoon games.

I had planned on discussing those games in this post, but I feel I'm reaching the limit of your attention span so I'll leave those impressions for the next post.

We have setup a YouTube channel for all the videos you'll see here and in the next post, so be sure to check them out. In the future we plan to add more videos to the channel so make sure you subscribe to it. I've also setup a Picasa album with the rest of the pictures I took for the morning workouts that are not in this post.