Share All sharing options for: Slugging for Dummies (Astros Version)

"Today they hit for ridiculous averages, can't bunt, can't steal, can't hit-and-run, can't place-hit to the opposite field, and you can't call them ballplayers....Where's our integrity? Where's baseball?"

--Attributed to Ty Cobb by Al Stump, his official biographer

Baseball has not always been about power. In the past, the greatest ball players were those who excelled at many things. Most of all, a player was considered great if he played hard, regardless if he hit hard. Ty Cobb was the first man elected to the Baseball Hall of Fame, and he never hit more than twelve home runs in a season. Towards the end of his career though, a young man nicknamed George Herman "Babe" Ruth, Jr. gave baseball fans a new model of what the ideal hitter is - one who hits as many home runs as possible. Over time, baseball adapted. Only rarely are hitters considered stars who do not hit dozens of home runs every season.

These days, how does one actually define a slugger? When a player has good power, what does that mean, other than he should hit a lot of home runs? Is that even what it means? In a previous post, I explained the skill of fielding as simply as I knew how. In this one, I will try to break down slugging in simple terms and relate that to the 2012 Astros.

Disclaimer: I am not a statistician. There are a zillion little details I have intentionally ignored or glossed over in the interest of presenting a clear overview. It's a big picture thing.

By now, most baseball fans have been exposed to the "slash stats". Slash stats are usually expressed as .260/.360/.460, where the first number is Batting Average, the second is On-Base Percentage, and the third is Slugging Percentage. To me, the meaning of the first two is obvious. The third one isn't quite so clear, and I've only recently begun seriously thinking about it. You can't define slugging percentage as "The percentage of times somebody slugged," because that would make no sense. An astute listener would say, "That's great, but what does it mean to slug?".

Fortunately, slugging percentage (or SLG%, in the interest of preserving my typing fingers), is actually fairly simple to explain. Slugging Percentage (SLG%) is the number of Total Bases earned per At Bat. In terms of middle school math, this is represented as follows:

Total bases are the number of bases earned by the batter for all hits.

Single: One base earned

In the image below, the 2012 Houston Astros are represented by their relative SLG%. The circles in the drawing are to scale (though I won't tell you what scale, just to preserve some mystery), so you can compare one player's SLG% to the others. The actual Slugging Percentage values I used for this are presented later in this post. 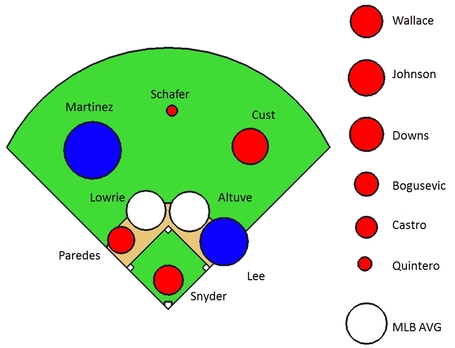 It shouldn't be a shock to learn that Carlos Lee and J.D. Martinez have the highest SLG% on the team, nor that Jordan Schafer and Humberto Quintero have the lowest.

Slugging Percentage really is that simple! The league-average slugging percentage in 2011 is about .427. This means for every one At Bat, an average player will earn 42.7% of a base by hitting. Obviously, that's not possible in one At Bat, but the number can be inversed to find out how many At Bats it takes for a player to earn a base.

A league-average hitter (.427 SLG%), will earn one base on a hit every 2.4 At Bats. The chart below shows how many At Bats each 2012 Astros hitter needs to earn one base. In this chart, lower numbers are better. This is intended to give a visual representation of who the better sluggers are according to SLG%. Again, we see that Lee and Martinez need the fewest number of At Bats to earn a base, and Schafer an Quintero need the most. 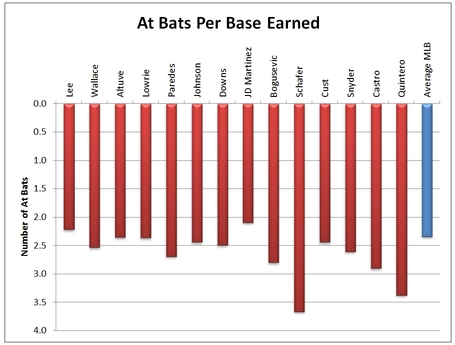 For a long time, SLG% was the statistic of choice for valuing a player's slugging ability, but as more geeky people applied their collective brain to the sport, it became obvious that other methods quantified slugging a little better.

SLG% has a failing. There is a way to "beat the system", so to speak. It is possible to have a high SLG% while not displaying the traditional counting stats (particularly in Home Runs) that are associated with a true Power Hitter. A good example of such a player is Ichiro Suzuki of the Seattle Mariners. Ichiro boasts a SLG% that is about league average, but in 7,500 At Bats, Ichiro can only claim 95 Home Runs and 74 Triples. The only thing that can explain his high SLG% is that he has a skill that outweighs his lack of power so much that it affects his SLG%. Of Ichiro's nearly 2,500 hits, 2,000 of them are singles, and this skews his SLG%.

Ichiro and others like him expose the weakness in SLG%, which is that extreme singles hitters can boost the SLG% stat so that it looks like they have more "power" than they really do.

People smarter than me have come up with the solution, which is called Isolated Power, or ISO. ISO removes first base from the "bases earned" equation. This gives the player credit only for the bases he earns beyond the first on one hit.

For those who enjoy this type of thing, the math for ISO is shown below:

SLG% and ISO give different pictures of who actually is a "Power Hitter" and this distinction is useful in actually classifying those hitters. The table below shows these stats for the past three seasons for the 2012 Astros.

Disclaimer #2: For players whose numbers came primarily from stats accumulated in the minor leagues, I have de-rated their SLG% and ISO by 10%. Everybody knows that a player will not hit as well in the majors as they did in the minors (with very rare exceptions, and I don't see anybody on the list below who should qualify as an exception), so it would be unrealistic to compare their minor league numbers to major leaguers like Lee. The 10% is purely arbitrary, because as I claimed, I am not a statistician, nor would I care to be one. Regardless, the numbers below should be close enough for horseshoes and hand grenades. 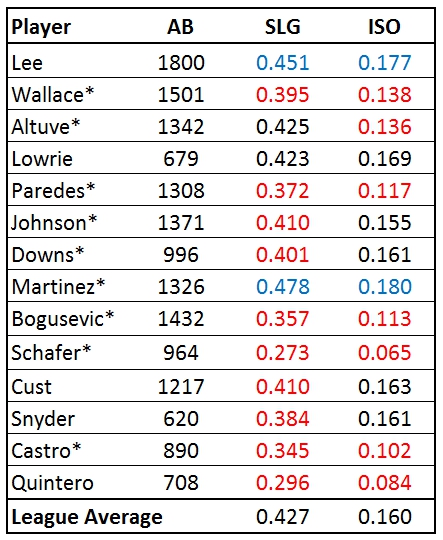 Again, only Martinez and Lee are above average significantly in either stat. The interesting thing about this chart is that it illustrates the difference between power as expressed by SLG% and power expressed by ISO. Take Lowrie and Altuve for example. By SLG%, they are roughly equal players, and both near league average. But when first base is removed from the equation, one can see that Altuve's power perception is boosted by a large number of singles, and that Lowrie actually has more true power. Oppositely, Cust and Snyder have below-average SLG%, leading one to believe they are not power hitters, but ISO shows that when they actually do earn a hit (which is not often, unfortunately), they generally hit the ball a long way.

Below is another baseball field showing the 2012 Astros' ISO, to scale with each other. This shows that Schafer and Quintero have almost non-existant power, and only Martinez and Lee are above-average. 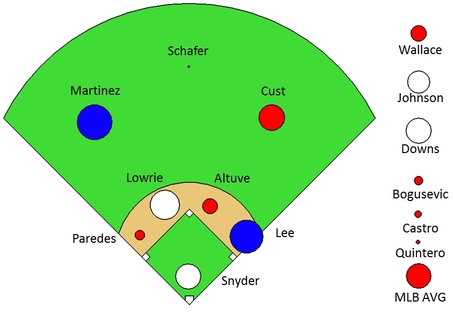 Just like SLG%, we can reverse ISO to find out how many At Bats are needed for a player to earn an extra base. Mathiness to follow:

The chart below displays this. Compare this chart to the one above for SLG% and you can see how ISO more clearly demonstrates who is a power hitter and who is not. It's also important to note that the Astros have no hitters on their current major league roster who are much better than "slightly-above-average" at slugging. This is something they will need to address before they can become contenders again. 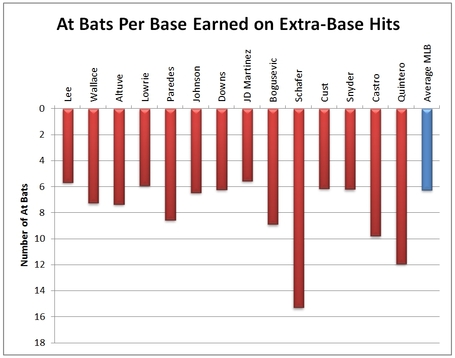 The next chart is a combination of the others above, so you can see the difference between At Bats per base earned and At Bats per extra base earned. This shows who the "singles hitters" are on the team: Schafer, Quintero, Castro, Altuve, Bogusevic, and Paredes. 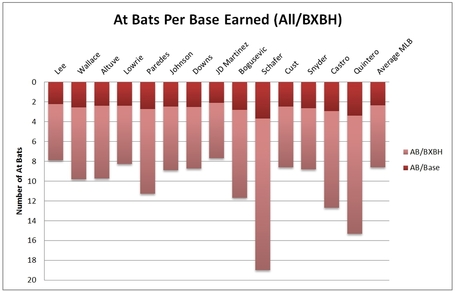 This data can be manipulated once again to show what percentage of Total Bases earned are extra bases earned by hitting extra base hits. Using ISO and SLG%, this is probably as clear a representation of who the sluggiest Astros are as I can manage. 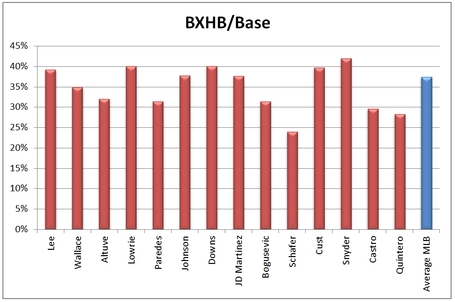 As you can see, a whopping 40% of Snyder, Lowrie, Downs, and Custs's bases earned are extra bases from doubles, triples, and home runs. If a manger were to rank the players according to who has the most power (discounting batting average and on-base percentage, which I would not recommend), the top "power hitters" on the Astros are:

I created this last table to look at some other hitters. This list includes two Hall of Famers, a guy who probably should be in the Hall of Fame, three guys who probably will be, plus two ex-Astros who are interesting cases. 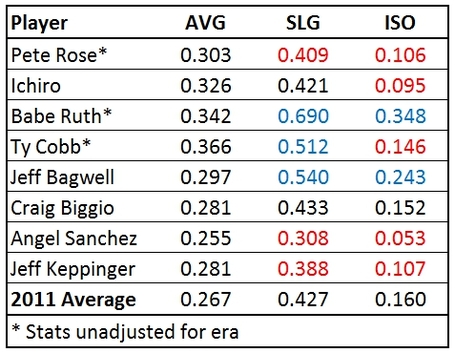 Ty Cobb, with a SLG% that would be considered excellent for any era, was actually not a power hitter by today's standards. He hit a ton of singles, just like Ichiro, and he has the highest career Batting Average of all-time. His ISO shows that by 2011 standards, he was below average in the power department (though by the standards of his own era, his ISO is very high).

Babe Ruth is added for comparison's sake, as no other player even approaches his SLG% or ISO, not even Barry Bonds. Pete Rose and Ichiro are good examples of players whose SLG% are hugely boosted by the enormous quantities of singles that they cranked out. Bagwell and Biggio are included because if I hadn't, somebody would probably have asked. This chart further illustrates how excellent a hitter Bagwell was.

We all know that Angel Sanchez is a poor hitter, and we all saw him slap nothing but singles last season. But the comparison between SLG% and ISO shows just how anemic Sanchez' bat really is. Of all the players I looked at for this article, Sanchez had the least power.

Keppinger is interesting in that his power stats closely match Rose's. Keppinger walks a bit less, but looking purely at power numbers and comparing the two players shows exactly how baseball's attitude has changed towards hitters. In the 1970's, a high-average player like Keppinger would have been likely to play every day for most managers, but these days, due to lack of power he struggles to find even utility roles.

The bat cracks, and immediately the crowd knows that the ball is gone. It rises into the night sky as cameras flash, seeming almost in slow motion as it soars in a casual arc towards the bleachers. The slugger saunters out of the box slowly, nodding in approval at his handiwork before dropping the bat halfway up the first baseline. The outfielder chews his gum and and expressionlessly watches the ball sail into the stands behind him - he never even moved his feet to chase it. The pitcher grimaces and pretends to scrape clay from his cleats, as if his footing were to blame for serving up the home run.

Baseball has changed since Ty Cobb played, and slugging has become the preeminent skill of a hitter. The information above shows that the Astros will need to make moves to acquire players with this skill if they are to catch up with the rest of the league's offense.