In Baseball the Sophomore Slump is generally referred to as a player’s second season or sophomore effort that fails to live up to the performance displayed by the said player during their rookie season. Since the Astros fielded a total of 20 different rookies at some point last season and thus have several potential candidates who could experience a sophomore slump I decided to take a closer look at how a player’s rookie season and sophomore season compares to each other. In this article we will look solely at position player’s offensive production, and I plan on hopefully getting something similar for pitchers posted later in the week.
A few details about the sample

I chose to sample rookies who debuted during the time frame of the years 2000-2010, and compare that to their second season in the majors. According to MLB's official rules a player is considered a rookie as long as they do not exceed 130 major league at-bats or accumulate more than 45 days on the active 25-man roster during previous seasons. Because determining the amount of days spent on the active roster was difficult, I chose to determine rookie status based on players who have not previously exceeded 130 at-bats during a season. I also chose to use the season in which the player broke the 130 at-bat plateau as their rookie season and not the season in which they first experienced the majors. As an example Lance Berkman played in 34 games in 1999 and accumulated 106 plate appearances, but did not surpass the 130 at-bat mark until the following season, therefore that season is used as his rookie season for this exercise.

There were a total of 607 position player rookies who appeared in the majors from 2000-2010. The chart below lists the accumulated averages of each year’s rookie class’ walk percentage, strikeout percentage, batting average, on-base percentage, and slugging percentage. Stats highlighted in yellow represent which season’s performance (Rookie or Sophomore) was more productive, and stats highlighted in blue represent no change from the first season to the second season. All stats used for this year were gathered from the Fangraphs database. 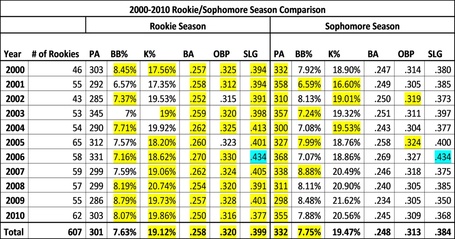 • 8.40% of the players sampled did not play in the majors at all the season after their rookie campaign, and of that group 4.78% have either never played in the majors again, or has not yet made it back to the majors.

The information above shows that from 2000-2010 the average player had about a 60% chance of seeing a decline in his offensive production during his second season. The year-to-year totals varied each season with the high being 72% of players sampled declining in the year 2004, and only 45% declining in the year 2003. One interesting thing to note is that even though the players walk rates improved in their second season, albeit only slightly, their overall on-base percentage still decreased. This is probably due to the fact that a players batting average on balls in play decreased from .303 during the players rookie season to .292 during the players second season.

Now that that’s out of the way, the Astros have 5 position players (Jose Altuve, Brian Bogusevic, Carlos Corporan, J.D. Martinez, and Jimmy Paredes) that could potentially enter their second season in the majors this year depending on whether or not they make the team out of spring training. Out of the five, Brian Bogusevic, J.D. Martinez, and Jose Altuve figure to be good candidates to make the opening day roster. Jimmy Paredes looks to be competing for the third base job with Chris Johnson, and dare I say Brett Wallace. Carlos Corporan doesn’t appear to have a shot at breaking camp with the club.

I’m not going to waste a lot of time on Carlos Corporan here, so we will move on to the remaining four. Most projections for the 2012 season show to have J.D. Martinez and Jose Altuve improving upon their rookie seasons while Brian Bogusevic and Jimmy Paredes are both projected to decline offensively, although Bogusevic’s projected decline is not as drastic as Paredes’ is.

Even though his walk rate decreased and his strikeout rate increased last season compared to his minor league totals, Martinez did not flash the warning signs of a player destined to regress a la Chris Johnson. His batting average on balls in play was .325 which is significantly less than what he carried in the minors which is a positive sign and could leave hope that he can avoid the sophomore slump.

Brian Bogusevic could be a surprise candidate to improve upon last season as he seemed to take a big step forward last season. While the warning signs of a sophomore slump are visible with his strikeout rate, walk rate, and BABIP all dipping below his minor league career totals, he has improved each year since switching to a position player in 2008. He is also coming off of a good showing in winter ball which has also gave fans a reason to be cautiously optimistic that he can avoid the slump this season.

Jose Altuve has done nothing but hit at every level he has played at thus far and was able to ride a great season in the minors from high-A ball all the way to the majors this past season. The biggest concern with Altuve’s rookie season was his plate discipline. Out of the 607 rookies sampled over the 10 year period Jose Altuve’s walk rate of 2.10% was tied for the 8th worse walk rate on the list.

All of these players improved upon their rookie walk rate; however they were all low enough that there wasn’t really any direction to go but up. Even though each player's walk rates improved the next season, none improved to the point of matching their minor league totals. Therefore it is quite possible that Altuve may have trouble obtaining his average minor league walk rate of 7.56% in 2012.

Since there has already been a lot of ink spilled over whether or not Jimmy Paredes would be able to match last season’s production, I figured it was appropriate to spend a little more time on him. The general consensus is that the batting average on balls in play that he maintained during the 2011 season was unsustainable and therefore he will experience a decline in his offensive production this upcoming season. With that in mind we will take a look at other players sampled that had a similarly high batting average on balls in play (BABIP), and see how that translated into their sophomore season’s performance.

There were a total of 20 other players during the 10 year time frame that had a BABIP higher than .375, which is similar to Paredes’ BABIP of .383 last season. The chart below lists the change between the 20 player’s rookie and sophomore seasons slash lines: 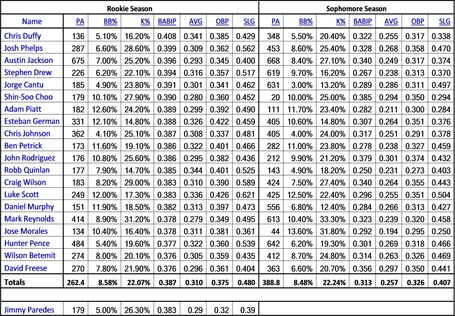 • Of the 20 players sampled only 2 (Jorge Cantu and David Freese) were able to avoid an offensive decline in their second season.

• The average batting average on balls in play dropped 74 points from one season to the next. The only 2 players that came close to sustaining their BABIP in their sophomore seasons were Shin-Soo Choo and John Rodriguez.

Given the fact that so many players have struggled during their second season it’s unlikely that all four of the Astros rookies can escape the sophomore slump this season. There is also the chance that some of these players could become part of the 8% that did not play in the majors in the season directly after their rookie campaign. It’s possible that Chris Johnson realized that his time is running out to prove himself and forces his way onto the roster, Matt Downs has a great showing in spring and allows the Astros to give Altuve more seasoning, and maybe Brett Wallace overwhelms and forces Lee back to left and Martinez to AAA. The more likely scenario though is that Bogey, Martinez, and Altuve will all be trying to avoid the sophomore slump in 2012. Jimmy Paredes...To be continued.

If your interested in looking at the overall rookie and sophomore season stats generated from Fangraphs for this exercise then click the following link. Sophomore Slump Position Players