What Does The Houston Astros' September Record Mean?

Cee Angi of The Platoon Advantage examines Houston's record since Sept. 1 to see if there is any meaning to the winning.

Share All sharing options for: What Does The Houston Astros' September Record Mean?

As part of SB Nation United, you’re going to be seeing some new voices at Crawfish Boxes, SBN "Designated Columnists" writing about issues both local and national. Think of them as guests in the community. We’re beginning this week Cee Angi, better known as one of the minds behind The Platoon Advantage.

If a team isn’t performing at the All-Star Break, the path to rebuilding has four easy steps.

Step One: Dump big salaries. This allows for financial freedom when considering off-season free agents, and as Branch Rickey once told Ralph Kiner, "We finished last with you, and we can finish last without you."

Step Two: Promote young talent. This step is necessary, considering the fact that many veterans with big salaries have been traded.

Step Three: Fire managers and coaches (Optional). While not always required, sometimes it’s best to make an example, particularly if the previous leadership was closely associated with failed policies.

Step Four: Lay low, wait for the season to end. Admitting defeat is hard, but at least one can avoid uncomfortable attention by staying under the radar until the records reset in the off-season.

Every year, there are teams that follow this blueprint. The contenders get stronger, while teams out of the race backslide into months of absolutely unwatchable baseball—just ask Red Sox fans. But the 2012 Astros, despite mathematical elimination on August 31st, haven’t followed the plan as outlined, ignoring Step Four while playing impossibly well given where they came from. Despite a miserable 8-46 record in July and August, they went 15-15 in September/October. It was their only .500 month of the season.

The obvious question is, is this reversal of fortune real and will it carry over into next season? Despite some notable worst-to-first examples (such as the 1990-1991 Braves), teams as sick as the Astros have been generally don’t get well overnight. But were the efforts of Jeff Luhnow enough to get the team even halfway to contention and put them in the vicinity of .500 in 2013? Is this team, the one that finished the season, not the one that’s coming—the hypothetical team filled with all of the prospects acquired in trades this July—really as good as it played?

To answer that question, we could certainly look at September records to see if they have carry-over into the next season, but it wouldn’t provide meaningful results given the relative rarity of the Astros’ position. Between 2000 and 2011, there were just 18 teams with 100-loss seasons: 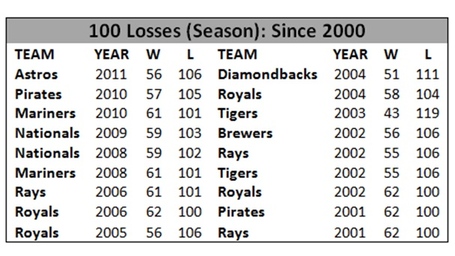 The list is limited in its instructiveness. While there are teams that have continued to struggle, some rapidly improved following dismal seasons. The Nationals, who had 103 and 102 losses in 2009 and 2008 respectively, will be in the playoffs this season for the first time since they went as the Expos in 1981. The Rays have had three 100-loss seasons since 2000, but also made the playoffs three times, while the Tigers were able to shake off their 2002-2003 doldrums by 2006.

This is good news for the Astros: The losing plague doesn’t have to be indefinite; given high draft choices as a result of their failures, teams can rebuild in relatively short order. In capable hands, the system works. Early returns on the 2011 and 2012 drafts suggest that the Astros are on the right track in this regard. That still doesn’t tell us much about this September, though. Is it a fluke, or is it meaningful?

The unsatisfying answer is that common sense tells us it’s likely a combination of both. The primary lineup the Astros have played down the stretch, while young on average, contains journeymen of questionable long-term value, such as Justin Maxwell, Scott Moore (.444 BABIP in September/October), and Jed Lowrie, all 29 next season. Lowrie, who has above-average pop for a middle infielder, represents a special problem, unable to stay healthy in any season and a marginal glove at shortstop. Meanwhile, several semi-prospects—Jason Castro, Brett Wallace, Matt Dominguez, Fernando Martinez—are playing at levels that at least in some cases are above what we can reasonably expect next season. While it’s possible that Dominguez’s bat has finally caught up to his glove, or F-Mart has rediscovered the prowess that made him a top prospect with the Mets, both possibilities have to be regarded skeptically until proven.

Pitching has been better in September/October, with four shutouts in the team’s final seven games, a feat which becomes even more impressive when you consider the team had only four shutouts prior to September. Starting pitchers have a 3.73 ERA in September/October, a figure that would rank fifth in the National League if it applied to the whole season. Again, let’s consider who made those starts. Bud Norris, disappointing before last season’s breakthrough, is hard to predict, but certainly retains the ability to turn in another good season. Lucas Harrell’s combination of strikeouts and grounders (his groundball/flyball ratio ranks third in the majors and he’s limited hitters to 0.6 home runs per nine) could endure. Neither, however, is young; both will turn 28 next year.

Dallas Keuchel, 24, may lack the stuff to capitalize consistently on his ability to induce grounders. Starts have also gone to Edgar Gonzalez, 29, and Fernando Abad, 26. Both could fairly be described as journeymen unlikely to develop into permanent fixtures. Though any pitcher can take a sudden leap forward, that leaves 21-year-old Jordan Lyles, another pitcher with a groundball tilt, as the only starter young enough that he might develop in directions vastly different from his current level of ability.

Consider also that the Astros’ pitching staff and position players are at war with each other. Thanks to pitchers like Lyles, Harrell, and Keuchel (as well as relievers Wesley Wright and Wilton Lopez), the Astros have the second-highest ground ball/fly ball ratio in the league, but they’ve also played some of the worst defense, ranking third from the bottom in defensive efficiency. The full benefit of the team’s ground-ball tendencies may await the maturation of Altuve’s glove and the acquisition of a better shortstop than Lowrie.

So, the cast of characters alone suggests that this September has been an anomaly, though one wonderful to witness. The Astros skipped Step Four, laying low, and kept the final stretch interesting. There’s an anxiousness about this organization that seems hell-bent on getting back to the playoffs for the first time since 2005, and if that represents the same tenacity we’re seeing in September, perhaps the Astros will follow a trajectory more like the playoff-bound Nationals and less like the Royals, who continue to struggle to figure it all out.