What Do The Houston Astros Need In A Designated Hitter?

Once again, Cee Angi steps into the "Designated Columnist" role to talk about the Designated Hitter and the Houston Astros. Pretty neat synergy, huh?

Share All sharing options for: What Do The Houston Astros Need In A Designated Hitter?

As the Astros prepare for the 2013 season move to the American League, they will undoubtedly have to shift their strategies to adjust to the new environs. The AL will require the Astros to focus on pitchers, especially specialty relievers, at the cost of fewer bench players, but the most visible change will be that the club will now have to ponder what to do for a designated hitter.

I use the phrase, "what to do" as opposed to "who to get" because the designated hitter position has evolved considerably over the last ten seasons and now requires a choice of priorities. In the late 90s, "what to do" meant finding a power hitter whose defined role was just that—hitting. Players like Frank Thomas, Edgar Martinez, and Harold Baines weren’t playing in the field often, but were huge assets at the plate. As ranked by True Average (a Baseball Prospectus statistic for overall offensive production that scales the same way as batting average), the 1990s were the height of league-wide DH productivity—in 1998 True Average (TAv) for the DH position was .283, an all-time high. The top ten: 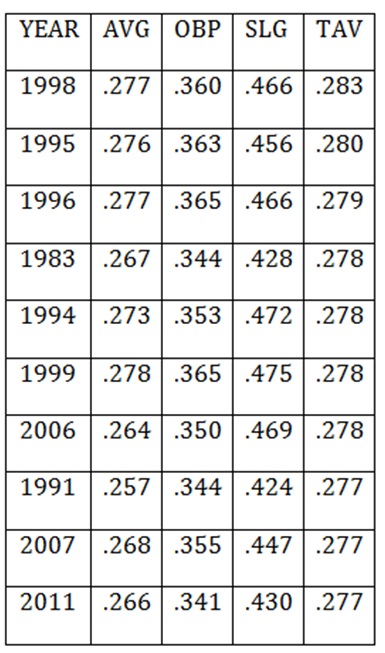 This century has placed three seasons in the top ten, but many others have slipped into the lower half of DH seasons as the position has occasionally suffered from being watered down, thrown away for reasons other than hitting. There are still some teams that use a dedicated DH, as the Red Sox have with David Ortiz, but he has become something of an exception as "what to do" at DH has come to mean treating the position as a resting spot for regulars who need a defense-free day while keeping their bats in the lineup. Since a consequence of that is often that a non-hitting utility player starts for the half-resting star (example: Drew Butera playing for Joe Mauer), the effect is really that of displacing an ideal DH with a weak bat. In that sense, the aggregate DH numbers are inaccurate; the position should be debited with Butera’s production rather than credited with Mauer’s.

This shift in usage is unsurprising given the way rosters are structured has also changed since the inception of the DH. Rosters are now dominated by specialized pitchers, not bench players. In the American League, it’s a vicious cycle of needing more pitchers to combat specialized hitters, but having more pitchers hinders a team from carrying specialized hitters. It’s a balancing act that isn’t always working, and in some cases teams have been reduced to burying their DH in the sixth, seventh, or eighth spot in the lineup while seeing very little return. The Mariners, for instance, saw less production from their designated hitters this season than any other spot in the lineup except for shortstop (.214/.297/.310, 11 home runs), while Rays DHs hit just .228/.289/.397—as good a reason as any as to why they just missed the playoffs.

Teams have lost touch with the meaning of the DH position for several other reasons: because DH has stubbornly remained the province of veterans (teams having resisted casting a young player as a DH, even when said young player clearly can’t field), it’s often an expensive position to fill. In addition, having a player for whom taking the field is a last resort or a flat impossibility, such as Jim Thome now, or past DH greats like Baines, Don Baylor, and Hal McRae, means a team can’t use the spot to give other bats a rest from fielding. Interleague play has also complicated the life of the bat-only player, reducing them to either pinch-hitter status in National League parks or otherwise requiring them to make awkward appearances in the field—which, as in the case of David Ortiz and Adrian Gonzalez, often has the effect of causing further distortion to the defensive alignment.

All of this is good news for the Astros in their move to the AL West and their quest to find a DH: The DH is a weak in their new division, so there’s an easy competitive advantage in managing the spot properly. It may seem counterintuitive to look at a team with as much work to do as the Astros and say, "Make a priority of the designated hitter, the position of superannuated veterans on the way out of the league," but that’s exactly the point—at a time when even a playoff team like the Tigers got only .257/.291/.395 from their designated hitters (primarily Delmon Young), and given a universe of available bats, it’s much easier to get a jump on the opposition at DH than it is at, shortstop, catcher, or center field, where a scarcity of good two-way players makes improvement difficult. This is an easy improvement that only costs money, and with veteran players you can go year-to-year on contracts, so no young player gets blocked.

The Oakland Athletics were the most successful at using the DH in the AL West this season, as three primary players—Yoenis Cespedes, Seth Smith, and Jonny Gomes—as well as several others, combined to hit .256/.345/.437. What led the West was roughly average in comparison to the league (.256/.328/.430). The kryptonite of A’s designated hitters (and their entire lineup) was strikeouts, with 173 at DH, the third-highest total in the league. The Rangers (.265/.323/.432 despite Michael Young’s terrible performance) and the Angels (.273/.321/.468, largely split between Kendrys Morales, Mark Trumbo, and Albert Pujols, the latter of which did not do his best work there) were close behind.

Fortunately for the Astros, they have created financial flexibility for next season. The Astros started the 2012 season with a payroll of $60.6 million dollars, 28th in the league. By the end of the season, they cut their salaries to a startling degree, and are currently obligated to only $5.5 million next season, $5 million of which is paying for Wandy Rodriguez, who was traded to the Pirates on July 24th, and the other $500,000 is owed to Chris Snyder whether or not they decide to pick up his option. There are several players—Jed Lowrie, Edgar Gonzalez, Wilton Lopez, Wesley Wright, and Bud Norris—who are arbitration eligible and will have their salaries decided before the start of the season. It’s rare to see a team get rid of that many salaries in such a short period of time, but the blank slate should be a huge benefit to the Astros.

As such, there are a dozen directions the Astros could go in terms of selecting the right DH. At this point any names thrown out would be pure speculation, but we can discuss a few for fun: Lance Berkman will be a free agent next season and if he’s physically able to play, he could be a great veteran presence, especially since he spent the first 12 years of his career in Houston. Outfielder Torii Hunter, 37, has had experience as a DH, could still play the outfield at times, and is coming off of one of his best seasons at the plate with 16 home runs and a .817 OPS.

The biggest splash the Astros could make, one which also involves the most money, would be to sign first baseman Adam LaRoche, assuming if the Washington Nationals decline their option. La Roche could function as either a first baseman or DH and provide much-needed power to the Astros lineup. There are a few more players like LaRoche that could hit the free agent market (Kevin Youkilis and Josh Hamilton, for example) that are long shots to join a rebuilding club. Even if they could be signed, the downside is obviously that these players are expensive and require long contracts—the same sorts of contracts the Astros ditched mid-season when it was clear they wouldn’t make the playoffs.

The Astros have already created an advantage by freeing up salary prior to the offseason, but the organization is going to have to spend money to improve, because it’s naïve to think they can build a winning team without spending some money. The thing they have to be most concerned about in their approach is how they spend their dollars and recognizing that building a team to compete in the American League isn’t the same as doing so in the National League. It could be several more seasons before the Astros shed their image as the team that lost more than 100 games two seasons in a row, but getting the strategy and the approach right at DH is one small way to accelerate their turn away from pushover status, an advantage they can take while other teams continue to the punt offensive production at an offensive position in favor of more pitching and resting position players.