Share All sharing options for: Astros and Cardinals Draft Comparison

New Astros owner Jim Crane has made it known that there are no shortcuts to recovering from the franchises worst season, and plans on rebuilding the team from the ground up. With the focus on building through the draft and the farm system Crane hired Cardinals' Jeff Luhnow to be the General Manager of the Astros. Luhnow has been involved in the Cardinals drafts since 2005, and played a role in improving the Cardinals farm system over the years.

With that in mind I decided to take a look at the Cardinals and Astros drafts from 2008-2011, which is the time frame in which Ed Wade became GM, and the draft started to become relevant again for the Astros. Since very few of these players drafted during this time period have made it to the majors, and the ones that have made it don't have a large enough sample size to determine what type of player they will be, I focused on the types of players drafted along with minor league career stats. This includes comparing college players and high school players, position players and pitchers, and how many of each category were signed by both teams, in addition to looking at minor league performance for rounds 1-10 from 2008-2010.

The first chart below shows the Astros and Cardinals Draft Distribution for 2008-2011, and the second chart shows the amount of money each team spent on the draft for the same time frame per Baseball America: 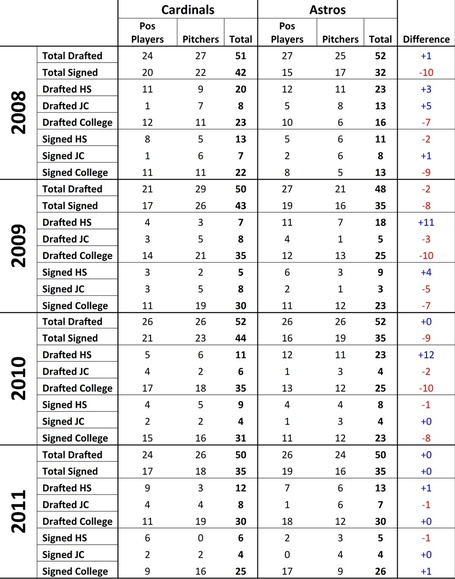 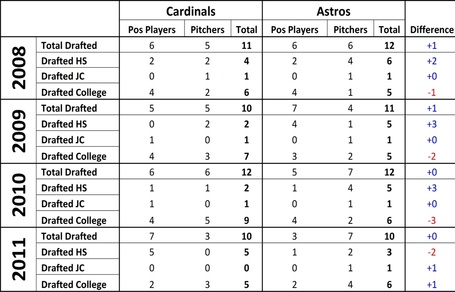 As far as actual minor league performance is concerned the Cardinals draftees in the first ten rounds have outperformed the Astros.

Below is a look at the average batting averages, on-base percentages, and slugging percentages for the drafts 2008-2010. 2011 is not included since the players drafted did not have a full season in the minors.

The pitchers were a little harder to compare the same way due to the fact that some of the pitchers have selected in these rounds have a very small sample size, especially in the 2009 and 2010 drafts, but below is the comparison between the Cardinals and Astros pitchers.

The Cardinals pitchers drafted from 2008-2010 outperformed the Astros in every category except for walks.

To wrap things up, Astros fans could see a difference in approach in terms of the draft going forward depending on big of a role Luhnow played in the Cardinals drafting strategies. Since Ed Wade and Bobby Heck has been at the helm we have heard a lot about projection and potential, but so far that hasn't translated into actual stats. It would be a nice change of pace to see performance matching expectations.