Since Hunter Pence arrived in Houston with a splash in 2007, no Astros player has generated as much interest upon his promotion from the minor leagues as current 2B Jose Altuve. Scouts, after hedging their bets by noting Altuve's diminutive stature, universally praised his "hit" tool, meaning his ability to create contact and thereby reach base. In the minors, his power numbers were surprising for a player his size.

All players regress when they reach the majors - this is just a fact of baseball life. But due to the hype surrounding his arrival in the big leagues, Altuve's performance to date has been disappointing. In Double-A, Altuve hit a world-class .361/.388/.569, smacking 9 doubles and 5 homers in 153 plate appearances as a 21-year-old against more advanced pitching than he'd ever seen. Yet in the major leagues, he is hitting an empty .287/.301/.386, or the numbers one would expect from a backup catcher with better than average hand-eye coordination.

Here is what is known about Altuve:

None of this has changed since his stay in the minors, so what has changed? Analysis below the jump.

A major difference is in the quality of the opposing pitcher. Every year it seems that for each position player that is drafted, five pitchers are drafted. The volatility of young pitchers is well-documented. Most learn neither the control nor the "stuff" to reach the major league level, and many flame out due to injury.

With more "competition", it can be un-scientifically surmised that it is more difficult to establish oneself as a major league starter than at any other position in baseball. Only the cream of the crop makes the major leagues. Even the worst major league starters are usually far better than the typical minor league or college pitcher.

Ergo, pitchers in the minor leagues make more mistakes. Mistakes that are obvious to hitters -- balls in the dirt, wild pitches that sail over the head of the batter, etc -- are ignored and taken for balls most often. But minor league pitchers make more crucial mistakes over the plate that give talented hitters opportunities to "do something" with a pitch. In the major leagues, this happens far more seldom.

This presents a unique challenge for a player like Altuve. As clack demonstrates in a recent article, the Astros swing at more pitches than any other team in baseball. Altuve is no exception, swinging at a ridiculous 55.2% of every pitch he sees. His high contact rate allows him to put a number of those pitches into play, resulting in his elevated batting average. This is a result of his greatest asset - the hand-eye coordination and bat speed that allows him to maintain such a high contact rate. Another free-swinging infielder with a contact rate of 88%, Troy Tulowitzki only swings at 41.5% of the pitches he sees. Although Altuve and Tulowitzki's contact rates are comparable, plate discipline marks the differences in their approach.

Digging deeper on those two players, Altuve swings at 46% of pitches outside the strike zone, while Tulowitzki swings at only 27%.

There is the real difference. Major league pitchers know that while Tulowitzki will swing at an above-average number of pitches, he has a good eye for the strike zone and will more often than not lay off of pitches outside the zone. They also know that Altuve will swing at almost anything. This leads to major league pitchers throwing Altuve more "junk" pitches located outside the strike zone or fooling him with breaking balls that drop away. Pitchers know that if Altuve swings at a pitch that is below the strike zone, he will drive the ball into the ground when he invariably makes contact. If the ball is way up, the pitch will be popped up for a shallow fly out. Far left, far right equal foul balls. The pitcher has the advantage. Most likely this was the case in the minor leagues as well, but with pitchers making more mistakes, Altuve punished everything that came within the strike zone.

Unfortunately, Pitch F/X data is not available from the minor leagues to confirm this, but one can look at the pitches that Altuve has "punished" in the major leagues and extract some interesting information.

Below is a chart that shows all of the pitches that Altuve has swung at since his first game in the majors on July 20. The stars show outcomes of Double, Triple, Home Run, or Sac Fly. 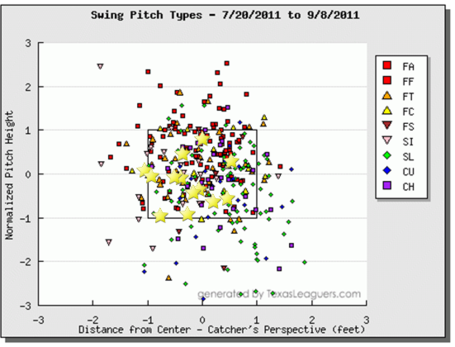 Just by those facts alone, one can state that Altuve would boost his overall production as an offensive player by waiting for good pitches, regardless if he can make contact with bad ones.

Before getting away from that chart, here is the same chart showing Tulowitzki's swings by pitch type over the same time period (July 20 to Sept 9) 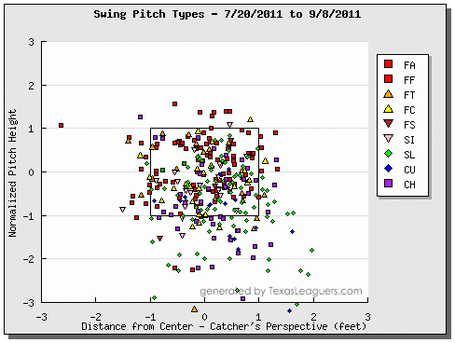 Clearly, part of Tulowitzki's effectiveness compared to Altuve comes from laying off pitches outside the strike zone.

Pitchers know this about Altuve and Tulowitzki (it's what their coaches are paid to research for them). Altuve's strength (excellent contact rates on balls anywhere in the same zip code) is transformed into a weakness because instead of trying to strike him out as they would with a strikeout-prone player like Paredes, they throw Altuve junk, counting on his "best skill" to induce weak contact either on the ground or in the air.

Looking at the results of the compared players illustrates this point. Below is the outcome of all of Altuve's at-bats in the majors:

Based on Altuve's approach and the approaches of the opposing pitchers, a negative result is produced in 67.4% of Altuve's at-bats. The next graphic shows that Tulowitzki's approach (ok, and his superior skill) result in a negative impact in only 54.6% of his at-bats.

To summarize, it appears as if Altuve's best tool, his ability to make high contact, encourages him to not practice good plate discipline. Since he knows he can make contact with balls anywhere around his personal bubble, he does so, and due to what the pitchers are throwing him, the most likely result is a groundout, pop out, or a bloop single. If he instead waited for the pitch he wants (one in the zone, for example), he would likely see a significant increase in the number of extra-base hits. This would improve his overall offensive production and make pitchers take him more seriously.

Altuve is very young for the major leagues, and it's reasonable to expect him to make these adjustments as his career progresses. Even Tulowitzki has reduced his Swing % at pitches outside the zone, while increasing his contact rate against them. Make no mistake - Altuve is not and should never be expected to be a player of the caliber of Tulowitzki. But he would benefit by studying the habits of other high-contact players like Tulowitzki who have succeeded as top-of-the-lineup threats, and emulate them to better himself.