Share All sharing options for: Cubs Squeak Past Astros 4-3

Two straight starts, two straight interesting outings for Henry Sosa. He gave up too many hits, but he also struck out quite a few Cubbies. He took another loss and probably deserved it, but I've been impressed with his two starts so far. It's still a pretty small sample size, but just like Jose Altuve, Jimmy Paredes and J.D. Martinez, Sosa is proving that he can perform better than his minor league numbers suggest.

Nice to see J.D. Martinez reach base three times, but the offensive star was one Matt Downs. Just look at this FanGraphs Win Probability chart: 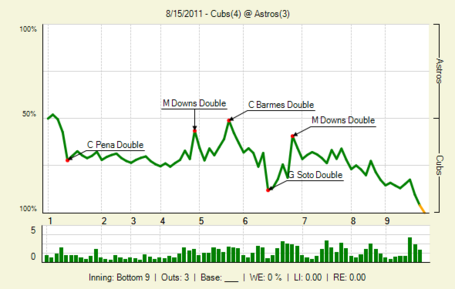 That's right, Downs moved the needle significantly two different times in this game with doubles. I like what Paredes is doing as much as anyone else, but why didn't Downs get a chance to play third base after CJ was sent down? Would the Astros be better off if Downs was starting at first base instead of Carlos Lee? Okay, these questions are getting ridiculous. Let's just wrap this up and get back to celebrating the Astros influx of minor league talent.