Let's take a break from obsessing over the draft, shall we? Insted, let's obsess over Jordan Lyles, who fell on his face a bit in his second major league start. So, let's look at what he did in Petco and how that compares to his first start.

Again, let's caveat this entire article before you read anything else. Looking at individual starts to analyze through Pitch F/X is really bad form. After all, there are variations on the cameras in different parks, there are sample size issues and a host of other reasons.

What this should be used for is real broad data. We're looking at his velocity in a general sense (I'm not nitpicking him 1 or 2 MPH), how he maintained that, which pitches he featured, etc. After we get a bit more data, we can start to look at the big picture to see which pitches have been effective and how they compare to the rest of the league.

So, that being said, let's look at what Jordan Lyles was throwing in his second start ever with the Houston Astros.

First up, the velocity graph: 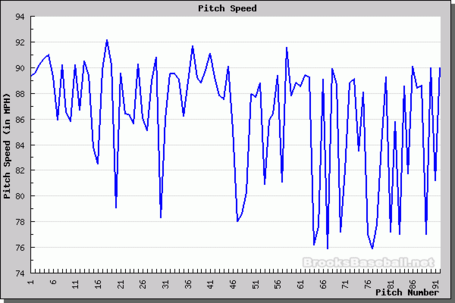 There wasn't much difference here from his first pitch to his 91st, with all his fastballs hovering around 90 MPH. Sometimes, they dropped down to 88, and you can see that there was a pretty sharp drop around his 50th pitch. Maybe he just tired a little or maybe he was featuring his two-seamer more then. It's not a huge deal, but what is clear is that Lyles' problems in the first inning wasn't due to his velocity.

So, what was his problem? 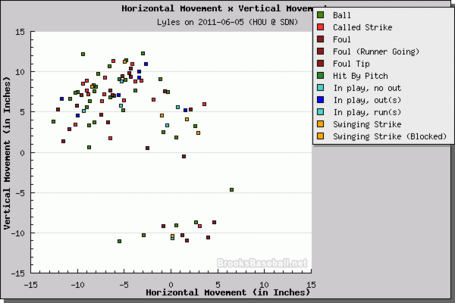 If you remember my article on his last start (which you can find here if you need a refresher), it's immediately apparent that this looks different than his last movement chart. I think you'll find the reason Lyles struggled right here. There just isn't the consistency with his pitches that he had last time.

Against the Cubs, that movement chart was tightly grouped in four areas. Now, everything is spread out, with the four-seamer showing the only similar break. That was also a problem, because those fastballs hovered in a dangerous area, not sinking enough to be really effective and not getting enough "rise" to get by hitters.

I'm not surprised by this, though. Lyles is young and part of that is having games like this, where his pitches don't seem to be working or he can't find his groove throwing certain pitches. Lyles will be better when he can consistently throw his pitches, but it's nice to see at least one possible explanation for why he struggled.

Remember that chart above when you look at his overall chart on what he threw here:

You'll see that inconsistency show up here in a couple of ways. First, look at the numbers for his slider. He got a good number of swing-throughs on it, despite only throwing 10 of them all game. He also was able to throw it for a pretty high percentage of strikes, but his slider's linear weight was much worse against the Padres than it was against the Cubs.

Like I said, we don't want to make too big a deal over something like this, but I'd surmise this is just a different way of looking at that inconsistent feel to the pitch. He wasn't able to get the same break over and over on it, which affected how effective it was. Same thing can be said of his changeup, which is a plus pitch when it's on, but seemed to give him problems in this one.

If there is a bright side to all this, it's that his fastballs were both pretty good, as that slutter/cutter and the four-seamer both got swing-throughs. Even though it's not the best pitch velocity-wise, if Lyles can use it to get by hitters' bats, he'll be successful.

All we know at this point is that Lyles will get one more start in the majors. After that, it's up in the air if he sticks with the team. What we've seen through two starts is that Lyles has the stuff to stay in the majors right now. If he struggles to throw his pitches like in this game at Minute Maid, he might just go back to Oklahoma City.