I've been thinking about something we talked about a little with David Carpenter and many times in these reviews of Jordan Lyles. How do you define control?

The first thing I jump to when control comes up is a macro sense of strikeout to walk ratios. How many walks per nine innings is someone giving up, etc.? That's a good starting point to talk about control. If a pitcher is striking out 4.5 batters per nine innings and walking the same number, chances are his control isn't very good.

But, that also misses a chunk of the question. What if the problem isn't control, but command of those pitches. The two words seem to be synonymous, but there's a pretty big difference at times. Specifically, Jordan Lyles may show good control in his brief major league tenure, but he's got a ways to go in the command department.

How can we prove this? Let's look at the Pitch F/X data and see what he looked like against the Rangers.


First off, you can see he didn't have his best night. His swing-throughs were way down, so he's not missing bats at all. He's still throwing a good percentage of strikes with all his pitches, they just weren't very effective pitches.

We're still no closer to seeing how his command was, other than knowing his pitches lost effectiveness and he didn't get as many whiffs has he has in the past. Let's delve deeper after the jump...

Here's a look at the strike zone plot of Lyles' start. Those are all the pitches he threw, complete with what happened to them. 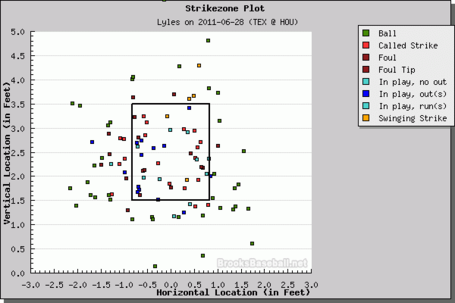 You'll notice that he had a ton of pitches off the right side of the plate that were hit or weren't very effective. He was able to get outs consistently by throwing in the strike zone but on the edge of that right side. However, he didn't have nearly the same luck on the left side of the plate.

That makes me think some platoon issues may have been raised here. So, let's go to the same graph, but splitting out right-handed hitters. 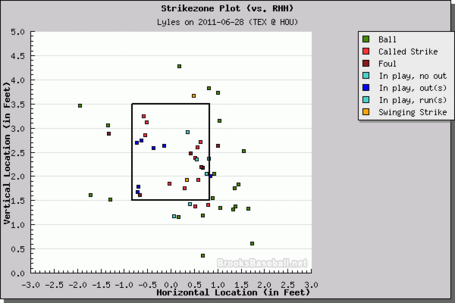 That's part of the problem, it seems. Lyles in this game wasn't able to get his pitches down enough to avoid getting slapped around. However, we still don't know a crucial piece of data. What were those pitches he had trouble with? 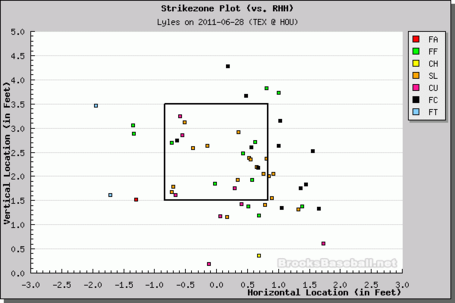 Luckily, the chart above solves that question. Instead of charting on outcome, it shows what the pitch was. You can see that he used the fastball, a slider and the curve on that inside corner of the plate to jam hitters. He appeared to have problems commanding his cutter, as some of them missed way outside.

If you compare the graph above and this one, you can see which pitches were the ones hit hard and not for outs. It was a group of sliders on that outside portion of the plate that didn't get down and a couple curveballs, below the strike zone, but a little too fat down the middle. That's part of the reason Lyles got hammered Tuesday.

The other half lies in what we don't see here. Lyles had trouble pitching to left-handers in this one, trying to work exclusively away with his change and it didn't work out too well. He couldn't get the slider down against right-handers and got hit around there too.

Basically, he had a bad night. But, in showing the location of those bad pitches, we understand a little about what he needs to improve. I'd look for him to better command that slider on the outside half of the plate and that the curve definitely needs work. I'm reserving judgement on anything else because it's just one game. He may not have walked a bunch in this one, but he did have trouble with his command, and it cost him.