I'm not sure how much we're getting out of these little looks into Jordan Lyles' pitching repertoire. I do know seeing what he's throwing and what's been effective has made me much more confident in his continued presence in the big league rotation.

See, one of the things that I worried about when he was called up is that Lyles didn't miss enough bats to get big league hitters out. Turns out I was wrong. He just doesn't pitch for strikeouts much, which keeps his pitch count reasonable and lets him pitch deeper into games.

Think about how deep he's pitched into two of his three games so far. He's averaging almost six innings per start, even with that short outing against San Diego. With any young pitcher, I worry about his pitch count and his "effort" pitches more than innings thrown. We'll get into that a little later, but it impresses me that he's been able to pitch so effectively early in his young career.

Clearly, Lyles' best pitch so far is his changeup. He got five swing-throughs on 19 pitches, though he only threw seven of them for strikes. That's an uncharacteristically low percentage, which leads me to wonder if it were a problem with feel or a plan that Brad Arnsberg cooked up.

His fastball was also remarkably effective, compared to where it's come from, and he got a few whiffs with the pitch. His velocity was also up a tick on the four-seamer. The slider was also very good, as he had the highest linear weight with it. But, that may be more a function of all the strikes he threw than effectiveness. Lyles clearly has a big league change and slider, though.

His cutter is also pretty good, even though it didn't show up that way in this report. Looking at FanGraphs' numbers, Lyles' best pitch value is on his cutter, with 3.3 runs above average. That puts him in the top 15 in the entire major leagues with that one pitch. We shouldn't get too excited, though, since it's a very small sample size. But, if Lyles can consistently throw his cutter, slider and change, he's going to be a very good pitcher. 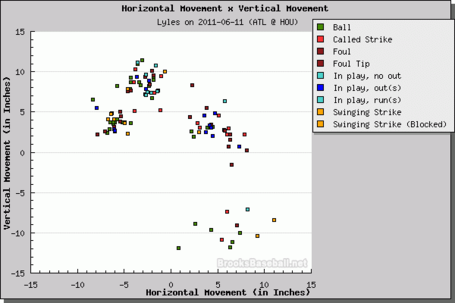 You can see on his movement chart that there is much more consistency here than last start. We talked a lot then about how he needed better command against the Padres, showing where his pitches just didn't have tight groupings. You can see here that there's a lot more pattern to the pitches. His curve is still inconsistent, but that's to be expected. That pitch is still developing and Lyles didn't throw it much in the minors. His slider, cutter and fastball/change are all right together. This should become a hallmark of Lyles' good starts. 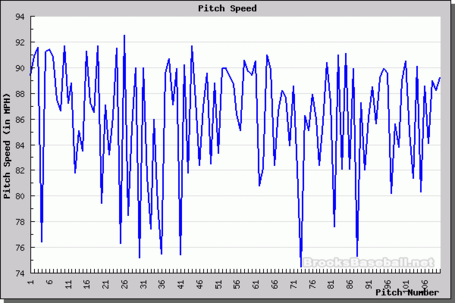 Here's what worries me. That graph was trailing down quite dramatically towards the end of his game, but Mills still left him out there in the seventh inning. The number one thing a young pitcher can do to get hurt is get tired, have his mechanics slip and cause an injury. Lyles clearly was tired by that seventh inning, but he was still run out there.

Is that a product of a bad bullpen? Maybe. Is that Mills' philosophy, to give a guy a chance to throw more? Possibly. Does that scare me? Yes, it does. Lyles is still a very young pitcher and the Astros are going to need to watch for things like this. When he started struggling to hit 90, they should have taken him out.

See, the thing with pitch count is it doesn't take into account this stuff. That's why managers get frustrated with people harping on pitch count. But, if you have something like this to point to in addition to a high pitch count, I think you have more of an argument.

Just don't get hurt, Jordan Lyles. That's all I ask.