One start into his major league career and we now have 90-odd pitches of data to dissect about heralded prospect Jordan Lyles. First things first, though...

The whole tenor of my reaction to Jordan Lyles getting brought to the big leagues was wrong. I was trying too hard to be cool, to show my edge as a writer...well, no, that's not true either. I was and still am just a touch skeptical as to how Lyles will hold up over an extended shot in the big leagues.

Certainly, he changed my opinions some in this start against the Cubs. He was good and, at least early on, he was striking guys out. He was also efficient, which is almost as important, and didn't really look like he was overthrowing or tiring late. I, like many of you, questioned sending him out for the eighth, but I also understood where it came from. I also thought Millsy did a good job of going to get him before things got too far out of hand.

So, if I was wrong about how to view Lyles, let's not take the cynical, fatalistic view. Let's dive right into the hardcore data, which can never lie. Ahem.

We will start out with one of the most important graphs, in my mind, looking at his speed chart over the course of those innings. 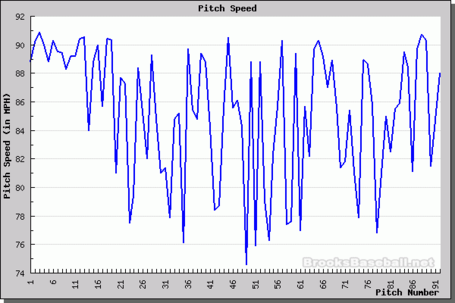 As expected, Lyles' speed spiked for about the first 15 pitches he threw. Imagine that. He had some extra emotion in his first inning in the big leagues? After that, we see his velocity fall back and become a little more erratic through the middle innings before he finished strong late in his start.

At first, I was worried about the fall off there, but then I saw the tail end of the graph and realized he hadn't lost velocity, he just wasn't necessarily sustaining it all the way through his start. That also could be because he's using different pitches, but we'll get to that in a minute.

What exactly was Lyles throwing? Here's a handy chart:

Classifying Lyles' four-seamer as a four-seamer is just nasty. We've talked about this before, but most four-seam fastballs have a vertical break around 10 to 12. That's why they seem to rise when they're coming to the plate; they're just not falling as much as you'd expect. Most two-seamers live under 8.

As you can see, Lyles' "four-seam fastball" had an average vertical drop of 7, meaning it had the giddyup of a fastball with the drop of a sinker. That's also why the pitch was so effective, though it was the least-effective of his big three pitches.

His breaking stuff was as good as advertised. Lyles' slider was his best pitch, judging by linear weights. You can see the explanation above as to what those linear weights mean. Basically, it was Lyles' out pitch, which was most effective when there was a chance for runs to score. The change was also very good, mimicking that rarely seen cutter/two-seamer that shows up at the bottom of this list (more likely misclassified fastballs). The change had good drop and really rode in on right-handed batters.

In fact, that's what made all of Lyles' pitches successful. He had great movement horizontally in on the hands of right-handers on almost all his pitches, but his slider bit away quite a bit from where the other pitches were expected. If a hitter has trouble seeing that pitch's rotation coming out of his hand, or is expecting the fastball or change, it's "Good night, Gracie."

Oh, and we also saw something tonight in those pitches that makes me feel better about that lower strikeout rate in Triple-A. Lyles missed a lot of bats and he did it with three different pitches. That's what I wanted to see. If he wasn't striking guys out, he needed to at least be missing bats, and he did that very well.

That's efficient. Lyles didn't need more than 15 pitches to get out of any one inning. I couldn't be more impressed with that. Sure, it's a bad Cubs team and not the '27 Yankees, but still...this was a 20-year old kid. He also threw a high number of strikes, which is good, especially considering what we've seen from J.A. Happ and Aneury Rodriguez this season.

But, don't let me get too far from those pitch classifications. The last chart I'm going to show you looks at Lyles' pitch movement based on horizontal and vertical break. We're going to simplify that above chart into a nice picture to see where Lyles' pitches were really going. 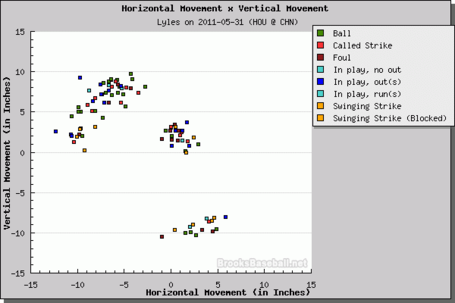 That middle pitch is the slider, the bottom pitches are the 12-6 curve and those blobby pitches up top are the fastballs. That's also why I think Lyles really does throw more cut fastballs than Pitch F/X gave him credit for. See how that bubble up top leans over to the left as it's falling down? That's usually indicative of cut or two-seam fastballs.  It's a different pitch from that cluster up at the top, clearly, but it doesn't show up like that on the board.

It's still very, very early to know anything by this Pitch F/X stuff. As I've said before, start-by-start analysis isn't very useful, because there are high degrees of variation in the data from camera to camera. Once we've got data on Lyles from 20 different starts, we'll have a better grasp on what he throws.

For now? He's got a good curve, a great slider and changeup with a heavy fastball that he uses effectively to get ground balls. He also may or may not have a cutter that he uses to jam right-handers all day long. He's efficient, much like former Houston hurler Roy Oswalt in that regard, and though he doesn't have great velocity on his fastball, he does miss plenty of bats. Anything I missed?