ast season, I periodically looked at what each starting pitcher threw in the previous game, according to Pitch F/X through wonderful sites like Brooks Baseball. I also included news and notes, but I think we're going to separate the two. This year, I'm going to try and write more specific article on the Pitch F/X looks, not because they take on more weight, but because I wanted to highlight the whole process. I just don't want TCB to lose too much geek cred without solid analysis.

For those of you unfamiliar with Pitch F/X analysis, here's a quick rundown. First of all, horizontal and vertical break show how much a pitch "moves" in the strike zone. If you ever hear scouts talk about late life and such, this is what they're speaking about. It's not optimal to look at in short doses, because there are sometimes huge fluctuations between each park. But, for our purposes, it'll show what a pitcher threw in a given game.

I'm also not going to be touching much on linear weights or time to plate, since those numbers are usually too granular to matter at this level. So, in the following table, we're really only interested in the average speed, the breaks, how many pitches were thrown and how many were strikes.

Myers has become this pitcher of many different pitches since joining the Astros. Pitch F/X classifies each pitch based on MLB average movement patterns, but the system is not ideal. For instance, here we see that Myers threw two cutters and one fastball. Not a four-seam fastball or a two-seamer, but just a regular old fastball.

Why should it matter what we call each pitch? Well, it shouldn't. I'm not going to pay much attention to that usually. What I look at is how similar pitches broke and if we can group them together. Is he really throwing three pitches, but the movement just works better at times? That's the kinds of questions this will answer.

In this particular game, you can see that Myers featured his slider, his sinker and his four-seamer almost evenly. That's a little bit of a change from last season, when his slider was clearly his go-to pitch. Here, though, it was the slider which narrowly edged out the others. According to these cameras, his two-seamer got some good run in on the hands of right-handers (H-Break of -6.31 means it broke to the left of a hypothetical center axis of a graph of the strike zone) while still getting pretty good sink.

He also clearly was pitching to contact in this game too, as he only had one swinging strike all game. You wonder why he didn't strike anyone out? There's your answer. What's could be concerning is if Myers' stuff isnt' good enough to generate more swing-throughs. That'll leave him hovering in dangerous territory of getting ripped at any time.

After the jump, let's look at a chart which better illustrates just what he was throwing (and why so many of these pitches seem to blur together). 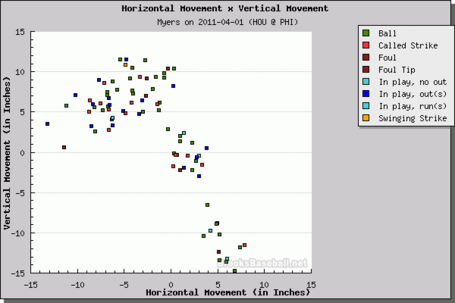 First of all, there are three distinct zones of movement. The first is that big cloud at the top, which would encompass both the two- and four-seam fastballs. Notice how it drifts down and to the left? That shows the two-seam predilections. You could almost slice that in half to show which ones were sinkers and which ones were rising fastballs.

That middle section is his slider, which sometime drifts up to look like a fastball and which doesn't have a ton of horizontal movement or vertical movement on its own. Myers' slider is effective because it moves quite a bit differently than the fastball. Though the pitch itself might not break as much as some other sliders in the big leagues, Myers uses his well and distinctly.

The bottom section shows his curve balls, which don't always break uniformly. That's why the curve is probably Myers' least effective pitch the past two seasons. It's serviceable, but he wouldn't want to throw it too often, simply because he doesn't always get the same break on the pitch.

Now that we've got the mechanics of Pitch F/X analysis down, let's look at Bud Norris' start, to compare it to Myers'. We'll get to Wandy later on, but right now, I want to focus on the two right-handers, because we can see how the Phillies' Pitch F/X cameras might be characterizing pitches.

For those of you who saw this last season, you'll notice that Norris is still working the same repertoire, featuring the fastball heavily and going to the slider secondarily. The changeup, while effective (three swing-throughs out of nine pitches??), is still not being used very often. that's the big question we've all been asking. His fastball is quite a bit more effective than Myers', since it moves in more than Myers' two-seamer while staying up in the zone. For four-seam fastballs, you want the vertical movement to be around 12-15 for the pitch to be effective.

Are you surprised in the least that his change looks very much like the fastball, just slower and with more sink? That's exactly why its an effective pitch and why Norris can get swing-through when people expect a strikeout. The problem then becomes why doesn't he throw it more often. 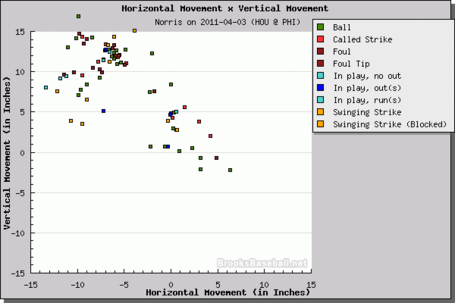 This is his movement chart from that chart. One thing you should notice is it's not quite as delineated as Myers. Where Myers' slider had its own grouping in the center, Norris' is all over the place. There is no definite center to his chart, which makes it hard to define which are the changeups and which are the sliders. If you refer back to the chart above this one, you'll see that the change and the slider also came in about the same speed. 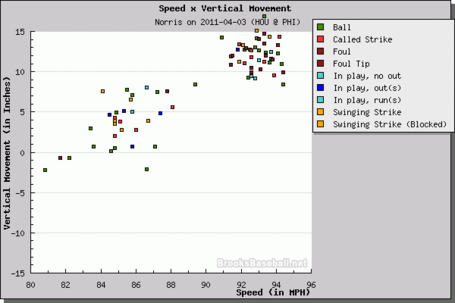 This graph shows Norris' drop on his pitches alongside the velocity of the pitch. That tight grouping in the upper right shows how his fastball behaves, but again, we get this long trail of velocity and vertical movement. That's not a problem, per se, but it may show why Norris struggled in the game.

Before we draw any more conclusions, let's look at one last graph, this time of how each pitch was spinning compared to its speed. 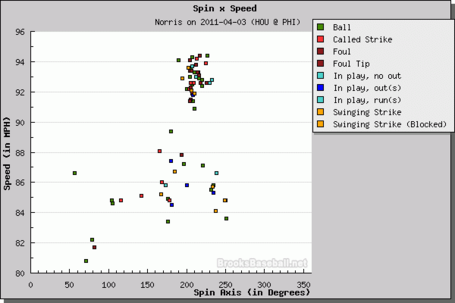 That's three straight graphs where we see very defined areas for his fastball and then a mess for the other two pitches. In this case, I think it's safe to say Norris was having trouble commanding his pitches. You can see that some of the changes were spinning about the same rate as the fastball (which it should), but there are those pitches on the periphery which cause problems.

Maybe Norris isn't throwing the change more often because he can't get it to act much different than his slider. Maybe the pitches blend together when he throws them at times, so batters are fooled some times, but not all the time. Maybe that's why scouts think he should move into the bullpen. I'm not suggesting we should draw any conclusions off one game, but I do think we've seen how Norris might've struggled besides the obvious (throwing meatballs to Ryan Howard).

Any questions? How'd I do?