Share All sharing options for: TRL at TCB: Bud Norris And The 2010 Season

Ask and I'll make up a little gimmick behind it. It's Gonna Happen asked last Friday about how Bud Norris progressed throughout last season. It's an interesting question that doesn't have a neat answer.

For instance, we can't really look at his Pitch F/X data start-by-start. I mean, I was doing that during the season, but wasn't drawing any meaningful conclusions off of it. The reason is every Pitch F/X machine is slightly off. The same pitch will seem to have more or less drop in Houston than it does in Colorado. So, it's not really fair to judge Bud on anything but his grand totals.

Likewise, looking at his splits month-by-month won't tell us what kinds of opponents he was facing, whether he got lit up in one big inning and are biased by random things like BABiP and below-average infield defense. Plus, without going start-by-start, we can't see his usage patterns or how long he lasted in a given game. And yet, start-by-start tells us nothing of the bigger picture. We see only what came before and may miss bigger trends.

Basically, judging a pitcher's growth is hard work. We have to set up parameters and look at things a little more closely. To that effect, let's look at Budly's 2010 season in two different, distinct ways to get an idea of how he changed from his rookie season.

The first thing I wanted to look at is a relatively new feature at FanGraphs: the heat maps. I've showed you the Pitch F/X scatter plots before. While those are cool (else I wouldn't use them so diligently), these heat maps really highlight the areas where a pitcher might have been targeting the ball. It takes that concept and transfers it to, well, heat maps. Just take a look: 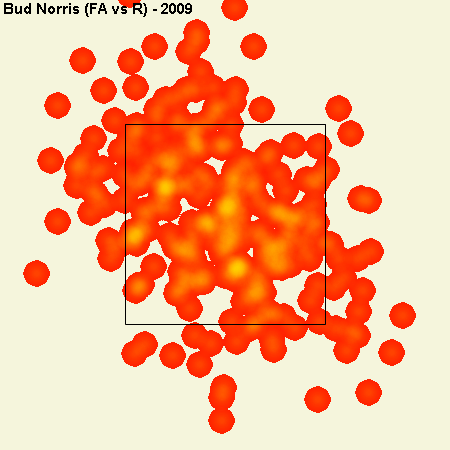 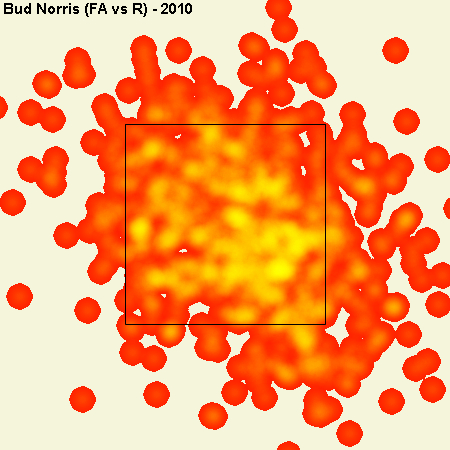 That's just his four-seam fastball against right-handed batters from both 2009 and 2010. Notice the only real difference is there are quite a few more pitches last season than in his abbreviated rookie campaign. There is a slight focus on the bottom right corner of the strike zone, but for the most part, Bud feels comfortable throwing his fastball wherever he wants and that hasn't changed. So, let's check on his other pitches: 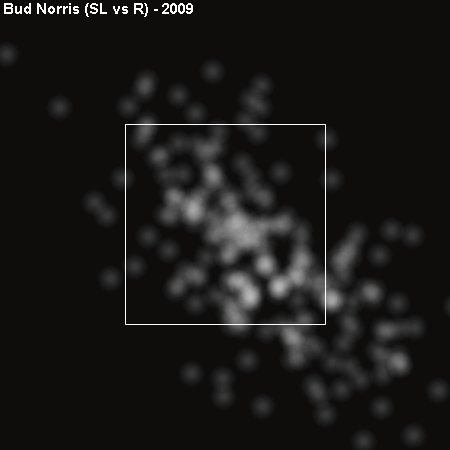 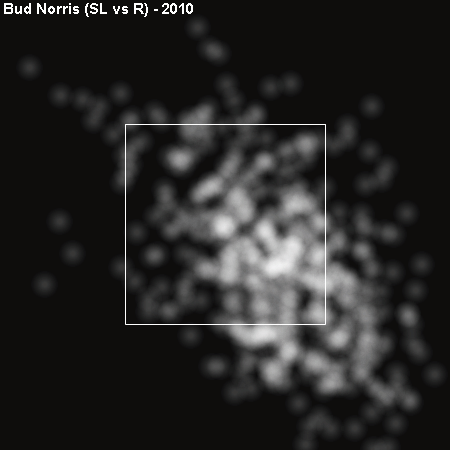 Again, there seems to be a slight convergence down and away, but nothing really conclusive. What about the change? We're going to look at it in two parts: 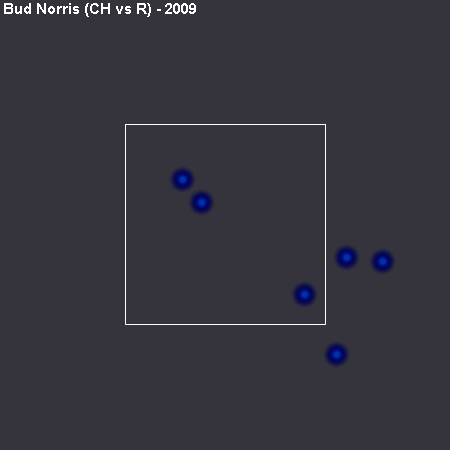 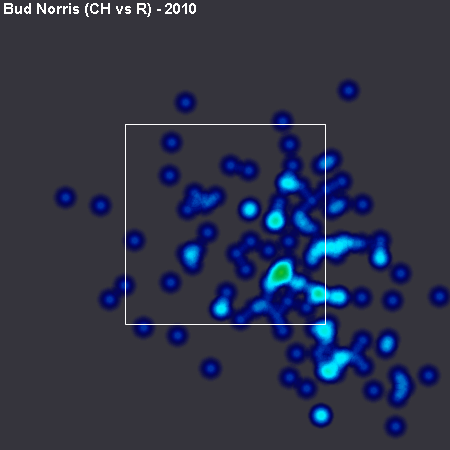 That's a pretty big swing in volume of changeups thrown, but we can't really get a sense on the location. One last time, let's look at the changes to lefties. 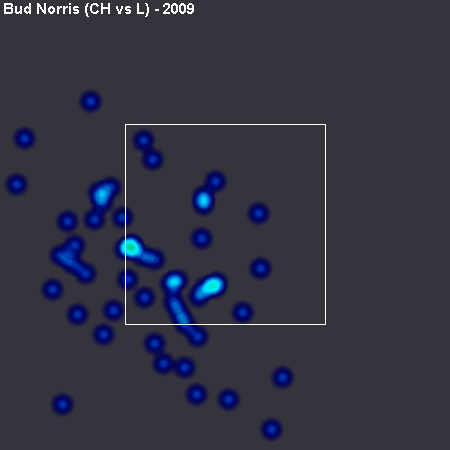 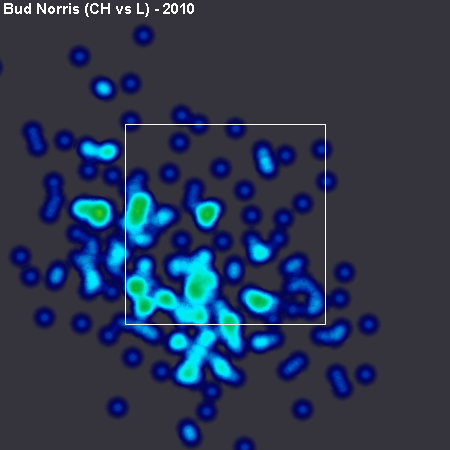 Again, the chart merely intensifies instead of differing greatly on location. In fact, of these charts, the only one to show radical difference in how a pitch was thrown was the change to right-handers. Even then, it was more an increase in frequency than a change in how Norris throws the pitch.

So, we can't go there for signs of Bud progressing as a pitcher. What about pitch sequencing? By that, I mean the count he threw certain pitches on? 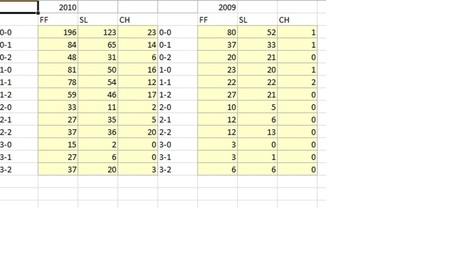 Two things pop out from this. First, Norris was basically using his fastball and slider interchangably in most counts back in 2009. Last season, he adjusted to use the change more when he would have used the slider. So, his number of fastballs didn't decline much, but his slider was featured less.

Secondly, and more important for our purposes, was what Norris did on 2-2 counts in 2010. Instead of focusing on one pitch, or even two pitches, he mixed all three in there to keep hitters guessing. That's a big plus in his education as a pitcher. 2-2 is a tricky count, giving the pitcher an advantage, but being very close to disaster. If a hitter knows he's going to see either a fastball or a slider, it's a lot easier to plan. But, when you could possibly see a change? That makes things very interesting for the hitter.

It's a small point, but it's the first positive sign I've seen that Norris could stick in the rotation. I'll admit, I've shared the sentiment that Norris could be better served in the bullpen. There, his fastball could gain velocity and his repertoire of two pitches wouldn't stand out as much. That profile above from 2009 shows exactly why I was worried about his staying power as a starter. Even Wandy, who normally used two main pitches, extended things out to three and four pitches at different counts. Bud never did, relying just on the four-seamer and slider for 2009. That changed, ever so slightly last season and is just one positive sign we can point to for Bud to continue to grow next season.