Who Art Thou, Jed Lowrie?

Share All sharing options for: Who Art Thou, Jed Lowrie?

The holiday season has arrived for a large portion of humanity, and that means good food, time with family, and the giving of gifts. Astros fans have suffered through what perhaps was one of the most difficult seasons for any fanbase since man picked up a stick and decided to take a whack at a ball of yarn.

First, the "Good Guys" struggled to a franchise-low 106 losses. Then, it became apparent that the club's owner, Drayton McLane, Jr was doing the equivalent of coasting carelessly through a few senior-year electives as he waited to hand off a franchise that he no longer maintained much interest in. Afterwards, the sale of the club was delayed by Major League Baseball as they claimed to investigate (for the third time) character claims against the new owner-in-waiting, Jim Crane, thus preventing an already budget-handicapped front office from making any useful changes to improve the club. Finally, Astros fans watched helplessly as Crain was strong-armed by MLB into accepting a $70 million bribe to move the Astros to the American League, which was widely criticized by just about everybody, including teams in the American League.

Yes, it's been a rough year. But now it's the holidays and the Astros are receiving gifts unheard of since Jeff Bagwell was given to them in an act of unprecedented charity. First, the Astros hired a GM, Jeff Lunhow who seemed eager to pull the franchise out of outdated methods of player development with statistical analysis applied to methodical scouting practices, and who even sees the importance of communicating with the fans. Next, an unexpected gift. Lunhow traded a player not needed for when the Astros regain relevance for a starting shortstop with a good hitting reputation and a solid and projectable minor league starter. Below, Jed Lowrie, the new shortstop for the Houston Astros, will have his stats unwrapped to give fans a good look at what they can look forward to in 2012.

Lowrie played for the Stanford Cardinal, where he was teammates with other current major leaguers, and where he won the PAC-10 Player of the Year award in 2004. He was drafted by the Red Sox and made his major league debut in 2008 due to injuries to the big league roster. He has seen part-time duties ever since, and has been constantly blocked by high-priced veterans, including Julio Lugo, Marco Scutaro, Mike Lowell, and Kevin Youkilis. In 2009, the Red Sox regarded Lowrie as their starter (contrary to some concerns by fans that the Red Sox never saw him as one), but injuries derailed his career starting in that year.

In 2011, Lowrie was traded to the Astros with minor-league pitcher Kyle Weiland, in return for relief pitcher Mark Melancon. Experts see the trade as a win for both teams, with the potential for greater return on the Astros' side due to Lowrie and Weiland's potential. The Red Sox have another minor league shortstop ready for the majors, and so dealt from a position of strength to address a pressing need in the bullpen.

Lowrie is a 27-year-old shortstop with a reputation for below-average defense and being injury-prone, though as seen below both of these reputations appear un-earned. He is a switch hitter and is regarded as a well-above-average hitter at his position.

Unfairly, Lowrie has been labeled as injury-prone, and despite no history of major injuries in the minor leagues, fans have questioned his durability. In 2009, Lowrie required surgery on his wrist, which landed him on the 60-day DL. Briefly after returning, a flare-up occured but he has had no wrist issues since. Wrist injuries sometimes lessen a player's power, but since returning from this surgery Lowrie has shown no lessening of in-game power.

Unfortunately, in 2010 Lowrie had a serious bout of Mononucucleosis which held him out of over 100 games, thus putting his career on hold even longer. In 2011, a collision in the field led to a pinched nerve in the shoulder that landed him on DL.

None of these injuries are related, and if all are healed (obviously, the Astros believe they are), there is no reason to expect a recurrence. The "injury prone" label that has been applied to Lowrie appears to be baseless without some evidence that he is less durable than other players.

What the Stats Say

Jed Lowrie has amassed 920 plate appearances in the major league so far, enough to identify trends. The table below summarizes his career performance to date. 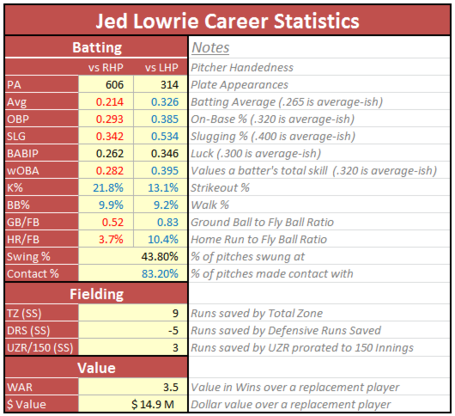 Lowrie, a switch-hitter, is a superstar-level hitter against lefties, and a very poor one against right-handers. This may lead to the same frustration that fans experienced with Lance Berkman, another switch-hitter who was superior from one side of the plate than he was from the other. One can hope that the Astros staff will recognize this and convince Lowrie to give up on switch-hitting, at least for a time, to determine if he can improve his stats against northpaws. Else, fans can likely expect vast differences in the quality of his at-bats, as well as opposing managers making bullpen moves to create favorable match-ups for their hurlers.

Other things to note from this table is Lowrie's excellent walk rate, which points to good plate discipline, even against right handers. This suggests that he does not have a poor approach from that side of the plate, but rather he just stinks at making good contact. His lower-than-other-Astros Swing %, high contact rate, and low strikeout rate also point towards good plate discipline. Perhaps he can positively influence young hackers on the team like Jose Altuve and Jimmy Paredes.

The defensive metrics paint a picture different from Lowrie's reputation as a below-average defender. Based on the sample shown so far in his career, he can be classified as almost exactly average in the field. While a downgrade from Clint Barmes (who was too expensive for the Astros' tastes and not as good at the plate anyway), this is still a huge improvement over most of the options on the Free Agent market and over the Astros' in-house option, Angel Sanchez, who is quite bad at the position.

Pitch F/X shows Lowrie's tendencies versus left-handers and right-handers, further indicating that he should swallow some pride and admit that he just isn't a switch-hitter. In the graphics below, the red and blue rectangles are "heat maps" of where Lowrie has had success creating positive outcomes with a swing. Red is good, Blue is not good. For more info about Pitch F/X, please see this link at Fangraphs. 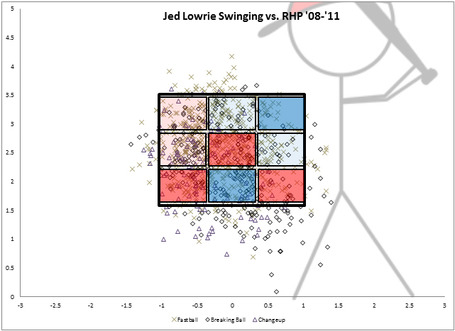 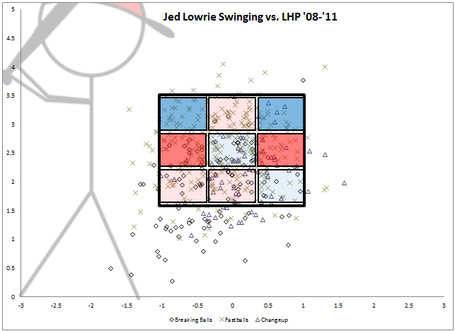 The charts above indicate that pitchers think they can beat Lowrie on the inside lower corner of the strike zone, particularly with breaking balls. Oddly, the results don't seem to bear this out, at least with fastballs, which he crushes in that zone. He does struggle with breaking balls there, but not enough to justify the frequency which he is pitched in that location.

The top graph (against RHP) shows that pitchers recognize how weak Lowrie is against them from the left side of the plate. The pitches cluster around the zone, with relatively few thrown far outside for him to chase. The pitchers are counting on Lowrie to make weak contact, and so are challenging him inside the zone. So far, it seems to be working, a fact that one can hope the Astros hitting coaches will recognize and advise him about. Again, a change may be needed, such as dropping the switch-hit routine.

The next charts show the pitches that Lowrie has swung and missed on. 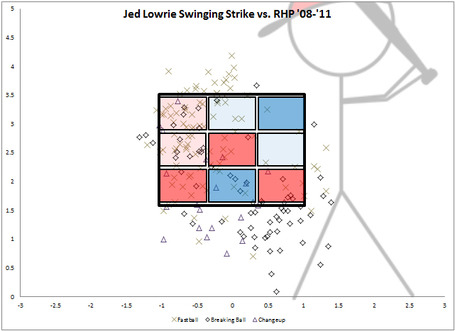 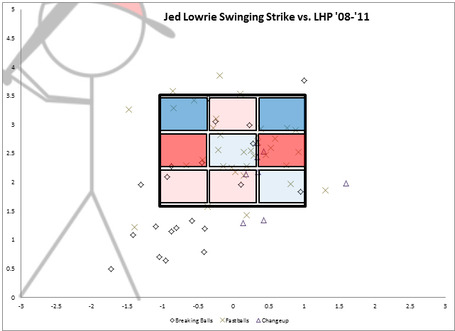 As speculated, Lowrie tends to swing at breaking balls inside and below the zone. Perhaps he has difficultly distinguishing those pitches, or is eager to swing, as such pitches would appear to be directly in the middle of the zone as they leave the pitcher's hands. Still, this is risky for the pitcher, as Lowrie absolutely mashes breaking balls that hang in the middle of the zone. Also, his hand-eye coordination appears to be not as sharp against right-handers, as he swings and misses at a higher percentage of pitches inside the zone against them. Lowrie already has a good approach, and if he is able to adjust and pick up ball spin a little better, he could become fearsome, especially against lefties.

In Lowrie, the Astros have acquired a cost-effective (well below the market value of a free-agent shortstop) player who is among the best with a bat at his position, while not providing negative value with his glove. Astros fans should be thrilled with this. Lowrie is still young and talented enough to make adjustments to further increase his value to the franchise, and for the first time in his career has an all-but guaranteed starting job.

Lowrie will quickly become expensive, as he is now in his arbitration years, but his cost in upcoming seasons still projects to be lower than a shortstop of equivalent value on the market, and therefore he will remain a valuable commodity until he hits free agency in a few years.

The Astros have another shortstop in the minors who is seen as a big part of their future, Jonathan Villar. Lowrie's presence eliminates the need to rush Villar through the minors, giving him the chance to let his bat catch up with his glove. When Villar is deemed ready, Lowrie will give the Astros a great opportunity to trade for even more top prospects, as few, if any, commodities in baseball are more valuable than a young shortstop who can hit.

The holidays have come early for Astros fans, and they should be excited about the early indications of the direction of the franchise.