Share All sharing options for: AL West for Astros Fans: The Los Angeles Angels of Anaheim

In 2013, the Astros will move to the American League West. Put down your torches and pitchforks, Astros fans; at this point there is not a castle to storm to unleash your righteous anger upon the heads of unjust dictators. At least, not where it will do any good or reverse the decision. You do not need to be okay with the move, but to help you get used to your new surroundings, this series of four articles will introduce Astros fans to the AL West.

The Astros have rivals and history going back to 1961 with various National League teams, but like it or not they will now have to forge new agreements of mutual aversion in the land of the setting sun. The Astros will have a DH. The Astros will say farewell to the double-switch. The Astros will say hello to long plane flights, a few late start times (but not as many more as people think), sea lions, bio-diesel and ethanol-only gas stations, rally monkeys and all sorts of other wacky West Coast-ery.

The Angels are no older than the Astros. They were founded in 1961 during the West Coast expansion, though they yoinked their name from Pacific Coast League and California League teams that previously bore the name going all the way back to the 1800's. By that, the Angels currently claim to have the oldest team on the west coast--a charming affectation that is not based in much fact.

After a brief politically-fueled scramble to find an owner, the team was finally bankrolled and bought by Gene Autry, also known as The Singing Cowboy. Autry is responsible for such hits as Back in the Saddle Again (not the Aerosmith version, obviously), Frosty the Snowman, and Rudolph the Red-Nosed Reindeer. Autry owned the Angels organization until 1998, when his death transferred ownership to the next-largest stakeholder, The Walt Disney Company. Disney then briefly changed the name of the organization to "The Mighty Seagulls" (just kidding). The name of the organization did change umpteen times due to a spat between the cities of Anaheim and Los Angeles over who actually cared about the team less. Newest owner Arte Moreno decided that both cities cared equally little about the team and officially changed the name to Los Angeles Angels of Anaheim, thus giving sportswriters an easy target for over-used mockery.

The biggest Astros-Angels connection is the Ryan Express. Nolan Ryan spent a good chunk of his career as an Angel, and that team coined his nickname. Ryan pitched four of his seven no-hitters while wearing an Angels uniform, and set an all-time strikeout record of 383 in a season while with the club. That record still stands today. Ryan's number is retired in "The Big A" in Anaheim.

Finally, perhaps the Angels' biggest contribution to society, the famous Rally Monkey originated here and is the team's unofficial official mascot. This is important to Astros fans because while the Rally Monkey was an amusing reference while in the NL, once in the AL West, all reference to the monkey will need to be avoided, lest one infers partiality to the other Los Angeles team. It's like drinking Gatorade in any SEC stadium other than The Swamp. 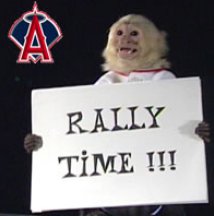 A Look at the Stats

Since 2007, the Angels have finished no lower than 3rd in the AL West, and 3rd only once. Over the past decade, the Angels have been the team to beat, though injuries have crippled the team for the past two years allowing the ascension of the Rangers. Astros fans can expect a high-powered offense boosted by a rotation that is top-heavy.

The Angels have averaged 91 wins over the past five seasons and last won a World Series (their only) in 2002. They are averaging 764 runs scored and 705 runs allowed, above average in both categories league-wide. Their roster has been fairly young, with an average age between 28.5 and 29.5.

Astros fans can expect contests with the Angels to be lopsided affairs unless the Astros have an ace pitching. The Angels offense expects to show more power than last season, and existing holes in the back of the rotation and bullpen will likely be patched this off-season.

GM Jerry Dipoto is relatively new in his position, but is signed through 2014. Manager Mike Scoscia is as entrenched in the city of angels as bad Hollywood baby names, with a contract that runs through 2018.

The contracts of outfielders Torii Hunter and Bobby Abreu will be off the books by 2013, allowing space for some young talent to shine, and off-season rumors have utility infielder Maicer Izturis being shopped around for the same reason. (P.S. The Astros need a shortstop. Dave Gottfried needs to get on the phone and ask about a price.)

Both middle infielders, shortstop Erick Aybar and second baseman Howie Kendrick will be possible free agents after 2012, but as they are one of the better offensive and defensive options available at those positions, it seems likely the Angels will offer both extensions, particularly if it looks like they'll be in contention for first place in the division in 2012.

Below is a possible roster, based on the players who are under contract or team control through 2013, players who may reasonably be expected to get an extension, and winter rumblings.

The hitters to watch out for here are Morales, who prior to a freak injury, was on pace to hit over .300 with 35 home runs for the second straight year, Trumbo, a surprise Rookie of the Year candidate who probably should have received more attention after clocking 29 dingers as a 25-year-old, and Trout, who will be mentioned below. Kendrick routinely is in the hunt for a batting title and has some of the best hand-eye coordination in the game, and Bourjos is a burner in the style of Michael Bourn with perhaps a bit more power.

Weaver and Haren are the best 1-2 combination at the top of a rotation in the American League, and second in baseball only to Roy Halladay and Cliff Lee of the Phillies. Weaver finished 2nd in the 2011 Cy Young voting, and Haren 7th. Ervin Santana meanwhile, goes overlooked because of the greatness in front of him, but has posted an ERA over 4.00 only once in the past four seasons. Jordan Walden, another Rookie of the Year candidate, looks to be a shutdown closer under team control for eons.

Prospects Near the Major Leagues

The Angels have a weak farm system, having graduated most of their young talent recently, but the Astros will still have to face some untested new blood by 2013.

Mike Trout projects to be the opening day starter in Right or Center field, and many experts believe him to be the top hitting prospect in all of baseball. Even better than somebody that Astros fans may have heard of: Bryce Harper. Astros fans will likely be cursing Trout for the next decade, as he has a combination of power, speed, and hand-eye coordination that is rarely found in one individual. Defensively, he is off the charts.

Beyond Trout, Astros will be exposed to Garrett Richards, a back-of-rotation starter who will be in his 2nd or 3rd season in the majors in 2013, Nick Maronde, a well-thought-of reliever, and 2B/3B Juan Seguara who may have difficulty finding playing time unless Aybar or Kendrick decide to test the free agent waters. Other than Trout, none of these project to be stars.

How to Beat Them

Initially, the Angels will be a difficult nut for the Astros to crack. Traditionally, Scoscia has claimed to favor small-ball style of play, with aggressive baserunning, hit-and-run, high batting averages over power. But with the re-addition of Morales and the emergence of Trumbo and Trout, the Angels may find that they wield more power than ever since the heyday of Vlad the Impaler. Expect to see aggressive baserunning by Bourjos, Aybar, and Kendrick to put themselves into scoring position for the big sticks, including Callaspo, Wells, and Trout, to knock in.

Oddly, the Angels did not fare well against Right-Handed pitchers over the past two seasons, with a batting average against (BAA) of only .249. This is promising for righty pitchers (here's looking at you, Bud Norris), though the Angels are a team that doesn't strike out much. In the AL, the Angels are 3rd-worst in walks during that time. Contrary to the "throw strikes at all times" mentality that pitching coaches claim to tout, Astros pitchers may be able to toss some junk balls in favorable counts to induce weak contact. The Angels' low average with men on base means that possibilities of an increased rate of double-plays exist.

Hitting-wise, there is no formula for beating Weaver or Haren. Both will eat up the Astros and their swing-first, ask-questions-later method. Expect lots of K's, so the Astros will have to capitalize on mistakes made by Santana, the back of the rotation, and the bullpen. Learning a little patience would not hurt, but that won't happen in the next couple years. The Astros are going to need late-inning rallies and sustained scoring opportunities to beat the Angels in what will likely be many hard-fought contests.

A Baseball Card for the Road

I wanted to close with my favorite Angels baseball card from my '87-'91 collection, but I forgot and I don't want to delay this article any longer. After all, I've been promising it to David and Tim for, like, two months now. I'll try to remember next time, but meanwhile, here's a famous Nolan Ryan card from his Angels days. Thanks, eBay! 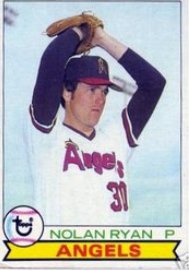