Defense for Dummies and the 2011 Astros

Share All sharing options for: Defense for Dummies and the 2011 Astros

Defense is in vogue. It's chic. If you are a member of the baseball nerd elite, you have the means for calculating UZR, +/-, PADE, TZ, FRAA, FRAR, and RTot in your head. You dream about it. You are, quite frankly, a paragon of mathematical genius.

For the rest of us, chances are we don't know or care what those acronyms mean. Our eyes glaze over when talk gets more complicated than discussions of "Fielding Errors." Defense is not sexy. It is not interesting. It is not worth 1,000 words.

The problem is that discussions about quantifying fielding ability are usually as easy to follow as an Esperanto movie translation that was originally filmed in Basque and dubbed into Zulu. The intention of this post is to break down the barrier between typical baseball enthusiasts and sabermetricians by presenting a look at the 2011 Astros' defense in plain English with lots of pretty pictures.

Disclaimer: I am not a statistician. There are a zillion little details I have intentionally ignored or glossed over in the interest of presenting a clear overview. It's a big picture thing.

Defensive Statistics in a Nutshell:

The first thing to know about defensive statistics is that they're usually absurdly complicated. They work by taking data collected by various stats agencies and plugging it into fancy algorithms. These equations are applied to a grid in the shape of a baseball field, in which each grid section represents the likelihood of a player to make a play of that type in that particular zone. Bored yet? Let's skip that, because the subject has been covered in detail elsewhere. If you make it through those five links, you're a trooper.

The thing to know is this: most new fielding stats try to present defense as the number of runs prevented or allowed over the course of a season due to a player's defensive ability. If you remember nothing else, remember that. It's even in red for easy reference later when you're explaining this concept to your family over dinner.

An exactly average fielder will have a score of zero runs added. Bad fielders have negative runs (meaning they're costing their teams runs allowed by their crummy play) and good ones have positive runs earned.

Several components go into defensive metrics, which may include the type of hit (ground, fly, or line drive), the difficulty of hitting a ball in each particular park, handedness of the batter, and range. It's all math. One part commonly discussed and contested among stat gurus is range factor.

The range is the area in which the defensive player is expected to make a play. There is a range in which an average defender is expected to make all of the plays. Beyond that range, the likelihood of a play made decreases, to a point where the fielder would need to defy the laws of physics to make a play in that location. The closer one gets to breaking Einstein's theory of relativity, the more runs a player is awarded for making the play.

If a player botches a play, he is docked runs depending on how easy the play should have been to make. Below is an image describing range. The further away from the center of the circle, the more difficult the play to make, and the more a player is rewarded for making it. Near the center of the circle, if he muffs the play, he loses fielding runs and gets soundly ridiculed by the nearest fans. 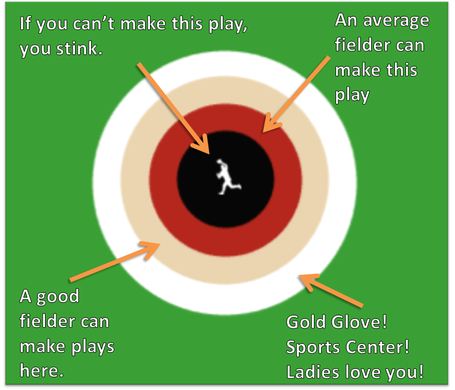 Defensive stats are still a work in progress, though they're a far better measurement of true skill than Gold Glove awards and Fielding Percentage. They have a few limitations:

Enough with the Nonsense. How did the Astros do in 2011?

Method: I found three sets of defensive statistics for the 2011 Astros and prorated them to 150 games. They are Ultimate Zone Rating (UZR), Total Fielding Runs Above Average (RTot/Yr), and Fielding Runs Above Average (FRAA). Each of these gives the Astros defensive scores in terms of runs earned or lost through fielding. In a totally scientific move, I averaged these numbers to get one value for the number of runs each player added or lost during a hypothetical 150-game period.

Below is a visual representation of the Astros fielding performance in 2011 using my rough method. It's arranged so that the quality of the defense is represented in terms of size of the circle and the color. Remember that the range of an outfielder for making a play is much larger than that of an infielder because they have more time to track a ball down. So don't compare the sizes between infield and outfield.

Each number represents how many runs were saved or lost due to a player's defense during 2011, averaged out to 150 games. 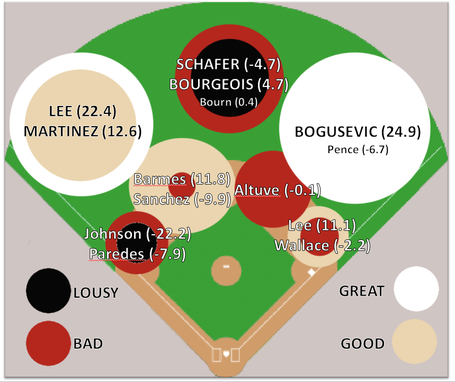 As shown, the Astros are a mixed bag defensively, with Altuve and Wallace closest to average at their positions. Here are some interesting takeaways:

What are your thoughts on the Astros 2011 defense, or defensive metrics in general?