Share All sharing options for: All Good Things...Astros Lose 8-4

This was inevitable, wasn't it? Not just the Cards roaring back to score so many early runs, but that JA Happ would be jinxed by my article. In fact, as Tuesday's game was wrapping up, I remember thinking, "I bet St. Louis is going to get their revenge tomorrow."

That they did, to the tune of seven runs in the first two innings, all off the aforementioned Happ. In fact, the lefty didn't even make it out of the second inning. It was as predictable as Carlos Lee being thrown out on a grounder. My glowing profile on him led to his worst start in his major league career. I give up.

On the plus side, Chris Johnson, Brett Wallace and Jason Castro all went 1 for 3 with a walk. Wallace also scored two runs while Johnson hit a home run. Castro chipped in a triple, scoring a run and driving in another. Since those three guys could be the future of the lineup, it's nice to see them have some measure of success in this game.

Nelson Figueroa also represented the bullpen well, striking out three in three innings of work. He allowed one hit in that time and needed just 42 pitches to get through those innings. With Brian Moehler suffering a bit of a setback in his rehab, it's good to know that Figueroa can be an effective long reliever.

So, the streak is dead. Starting Friday, we'll see if this Baby 'Stros team is really playing better or was just going through a lucky streak. Certainly, there wasn't much luck in this WPA graph. 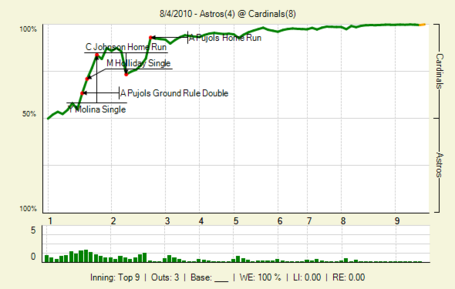