We did this for many of our starters earlier this year, so it's time to get to know the newest Astros starting pitcher, left-hander J.A. Happ. The 6-foot-6, 200-pounder was drafted in the third round out of Northwestern by Philadelphia in 2004. That's right, he was drafted by Ed Wade (surprised?). In 2004 at Northwestern, Happ played with Astros farmhand Mark Ori and went 9-3 with 106 strikeouts in 94 innings. He also walked 33 batters and gave up 80 hits and six home runs. In his career with the Wildcats, Happ was 16-11 with 251 strikeouts in 228 1/3 innings while walking 90, giving up 211 hits and 12 home runs. He was also named to the Collegiate Freshman All-American team in 2002. It's also worth noting that he never threw over 100 inning during any of his collegiate seasons and that his walk rate steadily fell.

He signed shortly after the draft and made his professional debut just over three years later on June 30, 2007. In his first full season of professional baseball, Happ made it to Double-A Reading, throwing six innings in a spot start and striking out eight. He began the 2006 season with High-A Clearwater, throwing 80 innings there before being promoted back to Reading for the remainder of the season. He did get one start with the Triple-A Scranton/Wilkes-Barre team, pitching six innings while striking out four to pick up the victory. In his first full season at Triple-A at age 24, Happ struggled for the first time in his minor league career. He struck out 117 in 118 1/3 innings, but his walks jumped to a career-high 62. He also posted his highest H/9 rate and his lowest strikeout to walk ratio of his minor league career.

It's worth nothing, though, that the Phillies switched Triple-A affiliates twice in three years when Happ was there. As I said, his first taste of the highest minors was at Scranton, while his second season was spent in Ottawa and his third in Lehigh Valley. Minor leaguers change teams all the time, but as we've seen with Lancaster, minor league parks fluctuate immensely. Assuming that Happ just forgot how to pitch or couldn't adjust to Triple-A hitters is not looking at the whole picture.

Happ also made his major league debut during that season with Ottawa, lasting four innings while striking out five and walking two. He gave up seven hits, five runs and three home runs in a loss to the Mets while throwing 94 pitches. After composing himself in the winter of 2007, Happ came back strong in the 2008 campaign, striking out 152 batters in 135 innings at Triple-A. He also saw his first time in the big league bullpen, making eight appearances and four starts for the Phillies. During this call-up, he was 1-0 in 31 2/3 innings, striking out 26 and walking 14. In those four starts, Happ struck out 15 and walked 11. In his first two starts, though, Happ walked eight batters, which is why I should be screaming small sample size about this performance.

In 2009, Happ replaced Chan Ho Park in the Phillies rotation on May 23 after Park gave up at least four runs in five of his eight starts. Happ had appeared in 12 previous games as a reliever with the Phillies, striking out 17 and walking nine with a BABiP of .217. Once inserted into the starting rotation, Happ was stellar. He finished second in Rookie of the Year voting after going 10-4 with 102 strikeouts in 144 innings as a starter.He started one game during the postseason, Game 3 of the NLDS against Colorado. Happ gave up three runs in three innings while striking out four and walking two in a game the Phillies went on to win 6-5.

He started the 2010 season as one of the Phillies, pitching two games before heading to the disabled list with an elbow injury. That kept him out until mid June, when he made four rehab starts for Lehigh Valley, one for Clearwater and three for Reading. Happ's control has never been great, but the elbow injury obviously caused some rust, as he walked 19 in 32 innings in his rehab stint.

Let's delve a little deeper into his 2009 numbers to see just what kind of pitcher the Astros can expect to have.

When Happ was traded, many thought him a nice pitcher with little upside. Basically, he'd been pigeon-holed as a fourth starter. What I saw in his minor league stat line said more, but let's check out his major league record in 2009 to see how much luck played in his season.

Happ did have a BABiP of .270 in those 166 innings in 2009. His BABiP as a starter was just a little higher at .278, but not much. He was still pretty lucky to have a sub-3.00 ERA with those kind of numbers, especially all his walks. Part of that, though, can be attributed to Citizen's Bank Ballpark. Happ gave up a significantly higher batting average against at home than on the road. He also allowed two more home runs in 72 less plate appearances.

Looking deeper, the majority of his plate appearances pushed the ball up the middle. He gave up seven of his 20 home runs up the middle. That's a good sign for his success at Minute Maid Park, since many of those balls won't be able to fly out of our deep center field. Right-handed batters really did damage to him, though, when they were able to pull the ball, which is not as great, considering the Crawford Boxes may start getting peppered with those balls. Happ gave up a .455 batting average on balls pulled to left field and nine home runs.

On a more positive note, it appears Happ was also very good when it counted the most. Given the standard caveats about sample size, Happ had 25 strikeouts and seven walks in 111 high leverage plate appearances. He also allowed just 15 hits and one home run while inducing seven double plays. He was least successful in medium leverage situations, but those high leverage numbers show some real promise.

Another good sign is the improvements he made in the second half of 2009. Happ made 13 starts in the second half of last season with an ERA of 2.96 in 79 innings. He also struck out 58 and walked 24 over that time span. The strikeout numbers could have been better, but his BB/9 rate of 2.70 is just about perfect. Before you think that ERA could be a fluke, his BABiP in the second half was .298, so his success there wasn't so much dictated by good or bad luck. The real knock on Happ is his strikeout rate. That's why his xFIP and the other advanced pitching stats are a good half-run higher than his ERA. I'm just not sold that he'll continue to post more pedestrian K/9 rates from here on out. If he were to bring that up around 8.0 like he had in the minors, Happ could easily be a star.

Now that we're done with the pie in the sky statistical analysis, let's look at what Happ throws.

The first thing that jumps out here is that his four-seam fastball is his Ol' Reliable. He throws it often right around 90 MPH. It has pretty good movement, staying up enough to be effective while diving a bit horizontally. His change is a little better than a show-me pitch, as it profiles pretty similarly to his fastball. His slider is just a little faster than his change, but has good diving action and breaks in on right-handed hitters. His curve was used sparingly. It's a slow curve that probably doesn't break enough vertically to be effective.

As you can see, Happ was able to throw his main three pitches pretty effectively for strikes. He also got a fairly even split on swings, but not many swing throughs. His main weapon with the fastball was getting batters to foul it off, which no doubt set them up for strikeouts. What's wild about this is those strike percentages shouldn't make you think of a guy who has control problems. Look at Paulino or Bud Norris. Their numbers never consistently approached 60 percent like this.  What that tells me is Happ may have just been a tad inconsistent in his first big-league starting role while time and good coaching can help him reach his potential.

I use this to again illustrate just how similar his change and fastball are. You can see in that grouping that the change does look like some of his fastballs and is probably good enough to fool hitters consistently (even if he's not getting many swinging strikes with the pitch). His slider breaks, but not a great deal and is probably a pitch that could use a little work. His curve is actually not much different than the slider. It just comes in slower with a little more break, which could be a reason why it gets hammered.

Nothing really to show here, other than Happ is really, really tall and pretty consistent on his delivery. That's a good, tight cluster of release points, and you can see that Happ tends to pitch more over-the-top. Again, the change and the fastball profile very similarly.

Let's compare now to his first start with Houston, via Brooks Baseball:

Pretty similar in most counts. His fastball, slider and change velocity are right on where they were last season, so we have no worries about the elbow injury sticking around. He didn't throw his fastball for as many strikes as he averaged in 2009, but it was by far his best pitch going by linear weights. His whiff rate jumped to almost 17 percent and both his change and his slider got much higher whiff rates than he averaged in 2009. The slider was his most hittable pitch, though, which is troubling since he threw it 22 times. Of course, he could have hit too much of the zone with the pitch, which led to it being more hittable.

The reason I put in this chart is to illustrate a very interesting point. Happ got better at throwing strikes as he went later into the game. He was definitely in full-bore cruise mode by the fourth inning and was able to shut down the Brewers after a rough first. If the Astros can get those early inning troubles smoothed out, Happ has a chance to be very good. 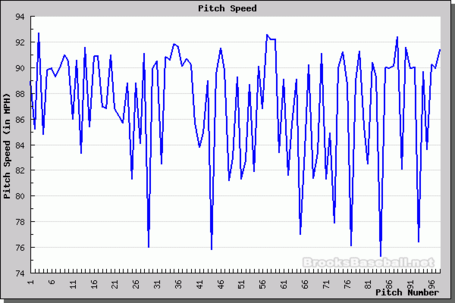 Lastly, I show this chart of his speed in that first start. What I really like best about Happ is he's pretty efficient. Only once last season did he need to throw 120 pitches and that was in a complete-game shutout of Colorado where he struck out 10 batters. He hit 100 pitches fairly consistently down the stretch for Philly, but he seems to hold his velocity well and not labor as the start wears on. To me, that suggests his injury risk is minimal.

All in all, I like Happ more after doing this research. I think there's more potential there than Philly fans and writers give him credit for and he could turn into a very good pitcher for the Astros. Suddenly, a rotation of Myers, Happ, Lyles, Keuchel and Wandy seems like it could win a ton of games.