Share All sharing options for: This Was Fun...Astros Win 18-4

Did you catch the most startling stat of this series so far? Bill Brown said it just before going to commercial after the top of the ninth inning.

Aaron Miles, the infielder, was the first pitcher to put up a scoreless outing against Houston in this series. An infielder. Imagine if I told you that two months ago? Could you believe the Astros would have this kind of offensive night in them? Or that they could do this without Brett Wallace in the lineup?

It's been a pretty crazy seven-game winning streak, but I do love beating up on St. Louis. To steal a phrase from Astros County, the "hero of the match" was definitely Angel Sanchez. The little shortstop that could was 4 for 6 with a double, a triple and six RBIs. For reference, Sanchez had nine (!!!) career RBIs before this game. His biggest hit came with the Astros up 6-3. He smoked a ball into right-center field that rolled all the way to the wall. Oh, and that happened with the bases loaded.

In fact, the Astros had the bases juiced more times this game than I think I've seen all year. A completely unscientific study I just did in my head backs up this theory. Either the Cardinals bullpen is really, really bad, or this team is just locked in right now. In addition to Sanchez's heroics, Carlos Lee and Pedro Feliz each had three hits while Chris Johnson was 2 for 5 with three RBIs. Johnson, Lee and Jason Bourgeois all had doubles while Wallace and a newly-active Geoff Blum were a combined 3-for-3 after entering the game as pinch hitters. Heck, even the light-hitting guys like Jason Castro went 2 for 5 with three runs scored.

I could keep going on, but I don't want to bore you. Recapping all those runs would get pretty dull, but still awesome at the same time. Did I mention how happy it makes me that we beat the Cardinals this bad? I imagine they'll still refuse to accept that the Astros are good enough to thoroughly beat them down like this. I wonder if they'll blame TLR again.

Maybe they'll just blame Cy Norris, who went six innings while striking out six and walking one. He gave up seven hits and four runs, but picked up his fourth win of the season. It wasn't his best start against the Redbirds, but it got the job done. How pissed do you think Roy Oswalt will be when he sees what kind of run support Myers and Norris have gotten the past two days?

Lastly, bestly, let's focus on the WPA graph. I know I talk pretty often about how nice the WPA graphs are, but really, this one of the greatest ones I've seen in a while. It went to basically zero...in the sixth inning!!!! That's four exclamation points, in case you didn't notice. Pretty awesome indeed. 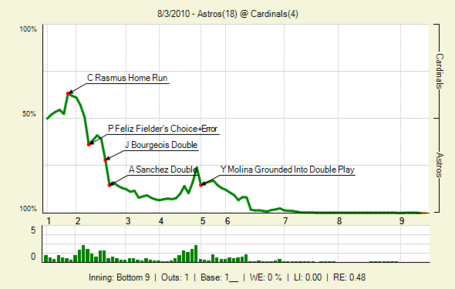