Share All sharing options for: Big Innings Propels Astros To 9-4 Victory Over Cards

Victories against the Cardinals are always sweet, but this one had a different flavor to it. Maybe it was the monster Pujols home run, or the myriad fielding mistakes in the first inning, but for most of the game, i expected the other shoe to drop and the Cardinals to take control.

In fact, when Myers was struggling so badly, loading the bases with no outs, I was sure the Cards would take the lead for good. Instead, a timely mound visit by Brad Arnsberg set up a nice double play. Myers lasted a couple more innings, continuing his streak of six inning starts. Myers wasn't his sharpest, but used good defense to get around some tough situations.

Instead of cratering when that first run scored, the Astros put two on the board early. After Pujols homer and the bases loaded mess, the Astros bats could have gone to sleep. That's why the outburst in the eighth and ninth innings were so clutch. Not just Chris Johnson's double. Not just Michael Bourn's perfectly executed swinging bunt up the middle for a base hit. It was everything combined.

One guy who looked really good was Brett Wallace. Every one of his at-bats were tough and he saw a lot of pitches. This was my first chance to see him play and I was really encouraged. He looks like he can be pretty good defensively, digging a ball out of the dirt in this one. I can also see him hitting for some power eventually, but, more importantly, he'll wear a pitcher down and draw some walks. Those are good things.

I can't overlook El Bufalo here, either. As much as I wish he could be one of the rebuilding pieces sent away, he had a pretty good game here. Lee made a sliding catch on a sinking liner by Matt Holliday that kept Pujols from moving into scoring position. He also had a nice slide to score the second run for Houston and had some timely hits. Then, we find out in the post-game show that Lee is comfortable at first, has been taking ground balls there for a while and could possibly play there against lefties. Does that raise or lower Lee's value in your mind?

I couldn't be happier by the fact that the Astros have a winning record against St. Louis now or that they are 5-2 at Busch Stadium (I, unfortunately, saw one of those two losses in person). I was also pleasantly surprised the Astros managed to score some runs off Jake Westbrook, since they typically struggle against pitchers they're facing for the first time. Maybe that's a benefit of the youth movement. They're too young to realize they are overmatched. Whatever the reason, the past few days have put me in as charitable mood towards the local nine as any time this season. WPA graphs like this tend to help that along. 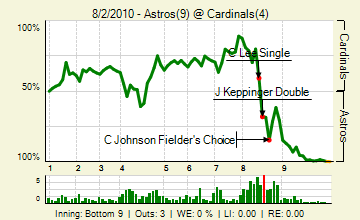