Share All sharing options for: Carlos Lee Is A Manly Man, Astros Win 3-2

I have to admit, I agreed with linxmalon when he called for Carlos to lay down the sacrifice bunt when he came up with men on first and second with no outs.

He, and I, were both waay wrong.

Carlos Lee told us, "I am not the dead weight you were looking for," and redeemed himself just as fellow slacker Pedro Feliz was shipped out of town. It also helps that he was playing first base as Brett Wallace sat against the lefty.

It was also a welcome reprieve against this unheralded kid the Mets threw at Houston. Who was this guy? I consider myself fairly knowledgeable about the rest of the league and I'd never heard of him. Of course, he goes out and retires 18 of the first 19 batters he sees.

Jerry Manuel sure didn't win the battles of the managers in the seventh, though. I could give him the first two batters Misch faced in the seventh. After all, you're trying to give the guy some confidence and save your bullpen (who'd just pitched five innings the previous night), but after Pence's sharp single to left? Warning signs must've been going off. Yeah, the pitching coach went out for a visit but whatever he said didn't prevent that three-run home run from Lee.

It's an interesting bookend to the General's decision regarding Norris. By leaving him out there for a ton of pitches, he risked injury with a guy who's already proven susceptible to arm problems once this season. And yet, he was under even more pressure to save the bullpen than Manuel. So, Norris threw 122 pitches and got through the seventh inning again, like the legend he has become. Wilton Lopez and Brandon Lyon locked things down in the eighth and ninth, with Lyon picking up his fifth save. All was well with the bullpen. Still, I have to question Norris' pitch count and it'll bear close scrutiny as the season wears on.

Let's forget about that for a minute, though and marvel at another WPA graph dramatically changing in the Astros favor. 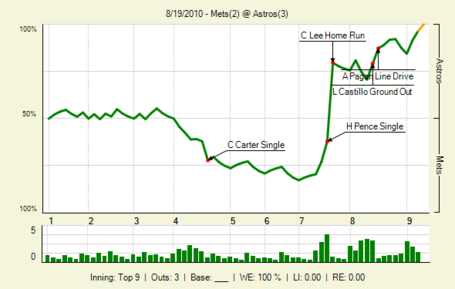