Share All sharing options for: Late Inning Comebacks Are In Vogue, Astros Win 8-2

Remember when I talked about that formula for Astros wins this weekend? Yeah, seems like they decided to follow it again.

JA Happ started out well, but gave up some late walks that hurt him overall. He still struck out five in six innings of work and only gave up two runs, both in the fourth inning. Mark Melancon also made a dominating appearance out of the bullpen in the seventh, striking out two in a perfect inning of work. I'm happ-y with this start for the young lefty. It just shows how good he can be, especially at missing bats. It's the PIrates, but three hits in six innings is pretty great.

Offensively, Hunter Pence continues to rake, scoring three runs while going 3 for 4 with a double and an RBI. Chris Johnson also was 3 for 4 with a solo home run in the eighth inning, proving that he wasn't weighed down by his on-base streak being snapped on Saturday.

The most surprising thing in this game? Pedro Feliz coming up with a clutch pinch-hit double that scored two runs. When was the last time Feliz did something this clutch? Has it happened this year?

The other thing that was really nice to see was Jason Castro having a two-hit game. He's been scuffling lately and manager Brad Mills gave him two days off this weekend. Castro has been struggling this season, but I'm really pleased with how Mills has handled it. He doesn't bury him, but gives him enough time off to work through these issues. I couldn't have asked for a better strategy from a new manager. 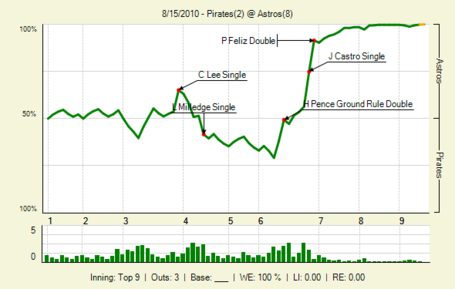