Share All sharing options for: Astros Rally Past Pirates 3-2

This is a formula I can get behind. Solid starting pitching, timely late-inning hitting and a save by Lyon.

This time, it was Bud Norris putting together his third-highest game score of the season (72) with a career-high 14 strikeouts. He also pitched seven innings and was very efficient with his pitch count. Outside of a rough first inning, Norris locked down the Pirates lineup.

Hunter Pence provided the offensive spark, going 3 for 4 with two doubles and a home run with two RBIs. Angel Sanchez was just 1 for 4, but he did drive in the other run with a single in the pivotal seventh inning. The only downer to the game was Chris Johnson's on-base streak got snapped at 25.

Other than that, I don't have a lot to say about this game. As I said Friday, it's nice to see WPA graphs that look like this. 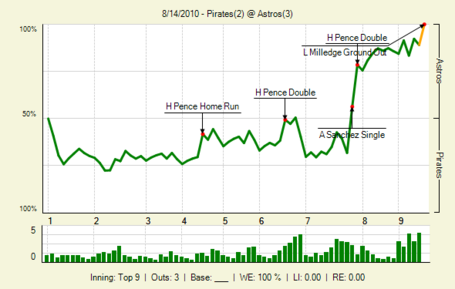