For a big chunk of this game, I expected to be furious about the outcome. The Pirates may be playing better, but there still not a good team. Getting shut out by said Pittsburgh team? Irresponsible.

Luckily, the Astros have a man named Carlos Lee. If there's one thing he hates, it's losing to the Pirates. So, with a mighty clout, he hit a line drive home run into the Crawford Boxes in the eighth inning to give the Astros a two-run lead. That's how Carlos rolls.

The blast was probably a bit inexplicable from the Pirates side, since starter Ross Ohlendorf pitched well, holding the Astros to just three hits and the home run came off All-Star reliever Evan Meek. Not that I'm complaining. The Astros lit up Meek pretty well, with Chris Johnson picking up a hit off him to extend his on-base streak to 25 games and Brett Wallace picking up an RBI single to left field.

Unfortunately, the late-inning heroics couldn't reward Brett Myers, who pitched well again and tied Darryl Kile for the second-longest streak of 6-plus inning starts in franchise history. Myers held down the Pirates by and large, giving up seven hits and one earned run while striking out seven and walking one. Wilton Lopez pitched a scoreless eighth inning for his fourth victory of the season and Brandon Lyon had a bumpy ninth but avoided giving up any runs for his third save as an Astro.

I always like seeing WPA graphs like this. I'm hoping it's also a harbinger of things to come this weekend. 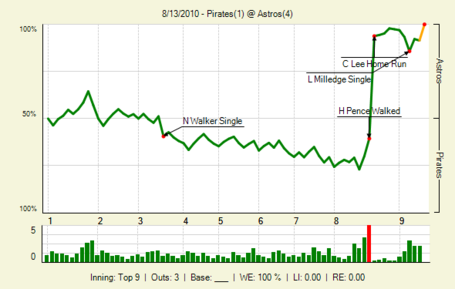