Some good stuff to get through today, as we endure another baseball-less night. Let's start off by looking at JA Happ's latest start.

The four-seam fastball is obviously his bread and butter. He mixes in all the other pitches in about the same percentage and got whiffs with all of them. The important thing to remember here, too, is this was against a Braves team that saw Happ quite a bit in-division the past few years. He's not just fooling a team he's never faced.

The interesting thing about his fastball is it had a lot of break in on the hands of left-handers. That may account for why the pitch was so effective and why he didn't throw it for a strike more often. 6 inches of horizontal movement is pretty significant on a four-seamer and is enough to make the pitch miss the barrel of the bat, instead trickling off the end. His change also profiles very similarly to his fastball, with similar movement to the left side of the plate and about two inches more drop. It's also significantly slower, which makes his average fastball velocity harder to anticipate. 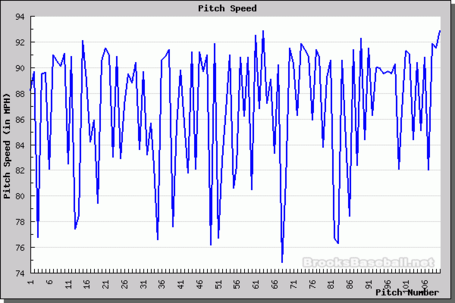 Another thing that impressed me here is that Happ managed to throw his fastest pitch after he hit the 100-pitch wall. That suggests he's comfortable in that 90-92 range and doesn't tire easily. He's still got a little left in the tank late if he needs it. That's not only impressive, but also useful to consider where injuries are concerned. Happ also seems to change speeds well, which is crucial for a finesse lefty. 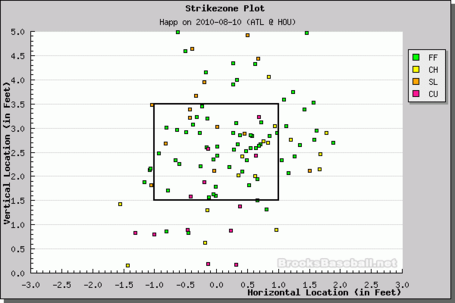 The thing I wanted to discuss here is his fastballs up in the zone. To me, it looks like he's throwing a number of sliders up above the strike zone too. Happ also is working so high in the zone that it'd be hard for batters to make solid contact. Remember, this is a normalized rendering of the strike zone and doesn't take into account a player's height in the box. That's a lot of distance between his highest fastballs and those curves in the dirt, too. I believe that's called "changing a batter's eye level" and is just another reason to be somewhat excited about this kid. He really looks like he knows how to pitch.

The curve was his best pitch, breaking sharply with some movement inside to right-handed hitters. He also got six swing-throughs with it, which is pretty good. I'm a little surprised Wandy didn't use more pitches. He basically stuck to his four-seamer and his curve. In past starts, we've seen him balance his four-seamer more with the sinker. I haven't looked at his starts in a while, but I wonder if his recent run of success has come when he ditched that pitch in favor of having more control over his four-seamer. Sounds like a research project down the road... 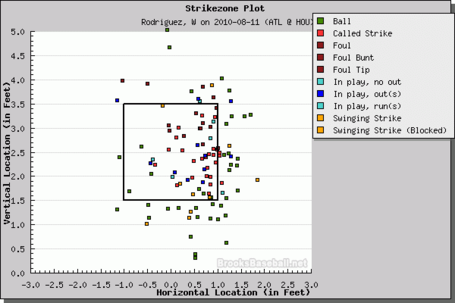 That's a pretty crazy plot. Wandy works the outside half of the plate HARD. You'd think hitters would be able to touch him a little more if he's being this predictable, but they really didn't. I guess when his curve is on and it's breaking right on that outside edge, right-handers have a hard time handling it.

What did the Astros give up for Lindstrom?: Since we've spent so much time recently talking about Matt Lindstrom, it's about time we revisited what the Astros gave up to get him.

Robert Bono was one of five highly regarded pitchers in Lexington's rotation last season. At 20, he was also one of the older members and probably the highest profile prospect in this trade. He moved up a level in 2010 to the High-A Florida State League, but has been horrible. His ERA+ is in the high 60's, though his FIP is a more reasonable 4.20. His BABiP is high right now, which means he's not exactly performing to his talent, but it's been a disappointing year for the right-hander.

Luis Bryan was a 18-year old shortstop playing in the Gulf Coast League last season. He spent time in extended spring training with the Marlins before moving to their Rookie league affiliate in the Gulf Coast League, where he hit .246/.317/.281. His defense is fair at short, but he did move to third for a game, which is telling. He was recently promoted to the New York/Penn League with Jamestown and is 3 for 20 in seven games. He's still very young and has yet to play in full season ball. He could still develop and haunt the Astros in future years, but it's more likely he's a long way from the majors.

That's not a bad give away for a player who has been the Astros closer for most of this first season and has largely impressed us.

WAR and replacement-level talk: Something to think about is this article at The Hardball Times related to Wins Above Replacement and fielding adjustments. The scarcity of resources argument is one that holds true with Houston this season. After Tommy Manzella went down with an injury (after basically being replacement-level at short himself), the Astros needed a guy like Angel Sanchez. The problem was Boston wasn't giving him up for peanuts. Luckily, the Red Sox also found themselves in need of a replacement-level catcher and couldn't find one on the open market to their tastes.

That's why it was such a shrewd move by Ed Wade to block Cash's release request, so he could eventually trade Cash to the Red Sox for Sanchez. Both teams get fairly valuable commodities at a lower price than they would have paid elsewhere.

We don't have a lot of information yet on Sanchez. While his bat has been good at times and his defense solid, the numbers don't yet back up those subjective evaluations. Sanchez has a -0.4 WAR at BBRef and 0.1 fWAR. With Manzella swinging the bat better at Triple-A, it may not be as hard a decision as we think to replace him with the Green Wave.

WAR and the Rule V draft: Just a quick note here on WAR and the Rule V draft. It's probably the least useful tool in building a roster, because so little production comes out of it. Still, when you get burned in it, like with Santana or Joakim Soria, it hurts all the more. Who knew the Twins were so adept at beating the system, though?

Astros to host Social Media Night: Are you nerdy? Do you Twitter like crazy? Are you friends with Hunter Pence on Facebook? Well, the Astros have a social night for you. Alyson Footer will be hosting the first ever Social Media night at MMP on August 31. For 35 bucks, you get a t-shirt, a chance to mingle with Footer and watch some (possibly) bad baseball.

Anyone up for going to this thing? It's a Tuesday night, which may discourage some people, but I'd definitely like to hear reports if anyone does attend.