The Braves were ready to leave Houston, apparently. After the Astros scored a run in the ninth inning off Billy Wagner to tie the game, Atlanta roared back with six runs in the top of the 10th. That included a one-out, pinch-hit grand slam by Brian McCann off Jeff Fulchino.

Just in case you were wondering, both Fulchino and Lyon made a case why they shouldn't be given the closer's role, as they both got into trouble in this game. Again, they erased a good start by an Astros starter, as Wandy Rodriguez struck out nine in seven innings while giving up five hits and two runs (one earned). Wandy got into some light trouble in this game, but had his curveball baffling the Braves all day. Still, it was only the third no-decision for Wandy this season.

This game had a chance to be special, especially with Hunter Pence making a gutsy, dangerous move by trying to take third on Carlos Lee's single. Pence was barely safe at third, setting up Chris Johnson for the RBI sac fly. With a runner on first and one out, Mills made the equally baffling decision to pull Brett Wallace in favor of Pedro Feliz. Wallace should never, ever under any circumstances be pulled for Pedro Feliz. Ever. Predictably, Feliz hit a weak pop fly to right field for the second out of the inning.

It was nice to see Billy Wagner get a win in his last appearance in Houston, but it certainly wasn't something I was looking for. It's more of a silver lining to a sucky end to the game. There weren't many other silver linings. Only three Astros managed base hits and they combined for four total hits against Atlanta's young phenom Tommy Hanson. Combine that with seven strikeouts and 14 men left on base and this game was pretty bad offensively.

Seems Winsday is officially dead. I only post this WPA graph to show just how much those last inning swung in favor of the Braves. 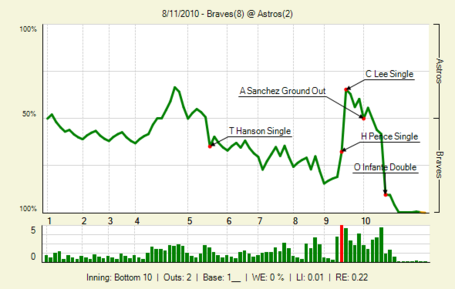