After Lance Berkman hit a first-inning, Crawford Boxes blast to give the Astros a 1-0 lead, Roy Oswalt must've known that was all the runs he needed.

See, he didn't allow another hit in the game. Oswalt threw his first complete game shutout since 2008 as he twirled a one-hitter. The only Buccos hit was by second baseman Neil Walker.

It was the 31st time an Astros pitcher has allowed one or fewer hits in a game and the first since Oswalt did it back on Sep. 6, 2008. Five days, later, Oswalt threw another nine inning shutout, which I referenced above. The last time a pitcher other than Oswalt threw one was Chris Holt back in 2000, against Milwaukee.

Oswalt struck out eight and walked two to pick up his 143rd career victory. That puts him one behind Joe Niekro for the franchise lead and two away from taking the record outright. It was also the first time since Darryl Kile in 1993 that an Astros pitcher allowed one or fewer hits and struck out at least eight. Kile had nine against the Mets back then.

All in all, this was a much-needed series victory heading into this weekend's matchup against the Cardinals. After all, we do have BudChuck going, and he KILLS the Cards. I'll leave you with a WPA graph that shows just how dominant Roy was in this matinee. 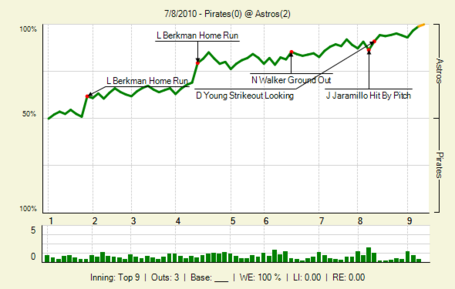