The reverse jinx works! When Stephen texted me about his latest Carlos Lee story, he said he wrote it partly out of curiosity and partly to reverse the jinx I apparently put on him with my HOF column earlier this year.

What does Lee do? Hits a home run in his first at-bat. I'm just glad all my stories on TCB don't jinx players, since my "Lance Berkman isn't declining because of his age" story didn't keep him from hitting a two-run home run. Add that to an RBI groundout and Lance had three whole RBIs.

It wasn't just Lee and Berkman cashing in on the offense Tuesday, as Jeff Keppinger was 3 for 4, Hunter Pence was 2 for 4 and Michael Bourn was 2 for 5. Even Jason Castro and Wandy Rodriguez got in on the fun, as they each went 1 for 3. Castro also had another walk, his sixth in 42 plate appearances.

Add to that another great outing from Wandy Rodriguez and this game turned out about as well as can be expected. In seven innings, he allowed four hits and one run while striking out 10 and walking two. It was the second straight start where Wandy looked like his 2009 self instead of this 2010 version. While it was the Pirates, who clack astutely pointed out are pretty bad on the road, it's still very encouraging. What's even better, Chris Sampson pitched a perfect ninth, striking out one in his third straight scoreless outing.

For a change, I even feel good linking to the WPA graph. Look how lopsided it is! We don't usually see that around these parts. Now, if only the Astros can keep up this offensive outburst. 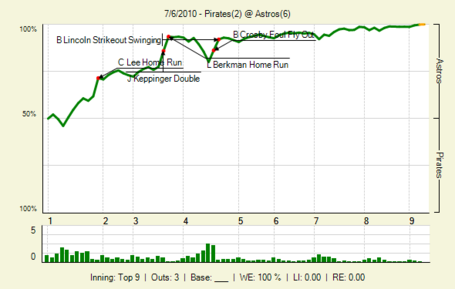