Starting with a line up that had an average age of 27, four rookies, and a first baseman playing in his first major league game, the presumable Astros the future did their best to make us forget about the pain of losing two franchise players. After a forty-eight hour period that stripped the team of their two franchise faces and set a lot of buzz about rebuilding, the baby 'Stros and won in shut out fashion for the second night in a row.

Wandy Rodriguez, perhaps happy to not be on a plane to another city, rewarded Ed Wade for not selling low on him by going 8IP, allowing five hits, striking out nine and walking one on one hundred and seven pitches (Ed Wade perhaps, though, is also licking his chops contemplating how this is raising Wandy's off season trade value). I'll have to say is this, "Good Wandy, it's good to have you back."

On the offensive side of things, the Astros got on the board early by stringing together hit, after hit. Jeff Keppinger and Chris Johnson had three hit efforts, with Jason Michaels continue to reward Brad Mills for starting him by contributing two hits—both doubles.

If this is what rebuilding continues to be like... 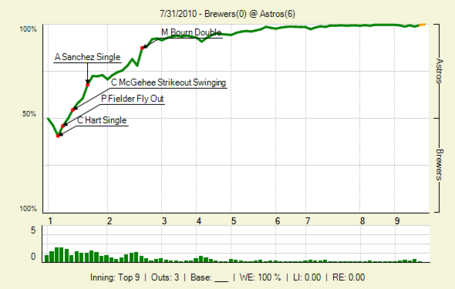