Don't you know that Roy Oswalt is simmering in his hotel room in DC having heard the news that J.A. Happ was welcomed to the Astros with four runs of support, and then one for good measure after he existed? But then again, don't you know that J.A. Happ was probably on cloud nine that on the day he was literally thrust into Roy Oswalt's shadow, Lance Berkman got traded and the Astros bats came to life? Maybe Roy will get his number from Brad Lidge and shoot him some words of advice, like "That kind of support happens maybe three times a year."

For a team that has been in the national spotlight non-stop over the last forty-eight hours and a starter with the weight of a fanbases' expectations on his shoulders, the Astros did not play like a team that was in such tumult. Ed Wade probably has his best shiteatinggrin on his face given that Happ went six innings, allowing only two hits, while striking out six, but walking four on ninety-eight pitches. The dismaying number of free passes aside, I don't know that you can ask for much more out of J.A. Happ in this start.

Jason Michaels, who made Brad Mills look a genius for putting in the lineup in place of Hunter Pence, Jeff Keppinger, and Chris Johnson went yard. Johnson continued to ensure that whatever regression occurs over the remaining 340 PA until a statistically significant 500 is reached he'll still look good by collecting not only the HR, but a double as well.

Good times in the midst of a roller coaster ride of emotions. 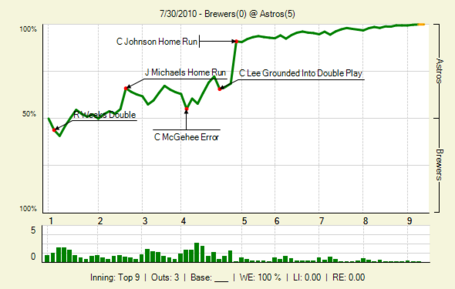