Share All sharing options for: Another Shutdown, Astros Dropped 1-0

For the past 18 innings, the Astros have scored zero runs. None. Nada. Zip. Zilch. Nil. Nunca. The Big Goose Egg. Blank. A Cipher. Nought. Oblivion. Zippo. Nichts. Scratch. Not one iota. Not one whit. Nothing.

Of course, the Padres lead the National League with 12 shutouts and ERA at 3.12. It's still disappointing to see so little output from this Astros offense that had made good strides lately. This game was literally 1-0 and was knotted at zero until the eighth inning. One little run could have drastically changed the preceding events. Same thing happend on Friday night. Game tied at zero till late, a run by the Astros could have changed the entire momentum.

Even worse, Houston wasted the best non-St. Louis start of Bud Norris' young season. He threw seven innings, striking out five and walking three while giving up three hits. He also had a ton of ground balls and was able to limit the number of line drives he gave up. Basically, he was plain missing bats.

Unfortunately, so was Padres' starter Kevin Correia. In fact, he only needed 90 pitches to get through seven innings, as opposed to Norris' 113. It's one thing to not get hits, but quite another to not see enough pitches to even tire a pitcher. Why does it take so long to get through one of those Red Sox games? Because they have patient hitters.

The crazy thing is that there was at least one hitter doing well again Saturday. Chris Johnson was 3 for 3 with two doubles, raising his batting average to .349. It's still a pretty small sample size, but he's showing great contact skills, isn't he? I don't think he'll sustain these levels, but it's been a pleasant surprise to see him getting so many hits.

So, blah. These last two games have been blah. I'm even blah about the WPA graphs, though they just make me sadder about what could have been. I really hope Sunday turns out a little different. 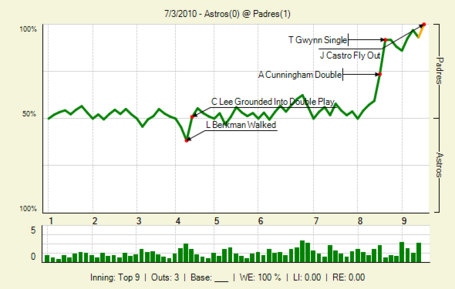