It's a streak that has to end soon. I mean, how improbable is it that the Astros have now won 12 straight Wednesday games? Were I a betting man, I'd be very tempted to put a large sum of money on next Wednesday's game, just to cash in. Seems like  this team can't be beat in midweek games.

More seriously, this was a much-needed win for guys like Bud Norris and Carlos Lee. El Bufalo hit two huge home runs, dinking one off the Fowl Pole in left to give every attendee free Chick-Fil-A sandwiches. Norris threw six innings while allowing four hits and three walks, striking out seven and allowing one unearned run. Norris only needed 86 pitches to get through those six innings. He could have easily pitched into the seventh, but Mills pulled him in favor of a pinch-hitter during the sixth inning rally.

Budly has been up and down all year, but has now thrown at least six innings in four of his last five starts. It's also the third time this season he's given up no earned runs and the first time since that stellar start out in San Diego.

Lee, for his part, has been hitting somewhat better. At least, he's not striking out nearly as much as he did at the beginning of the season. In July, he's only struck out four times in 84 plate appearances while tying for second on the club in home runs with four. His average is still down and he's not driving in runs, but at this point, I'm taking whatever I can get out of Lee.

Don't forget Lance Berkman's perfect day at the plate. The Big Puma reached safely in all five of his plate appearances, walking three times and going 2 for 2 with a double and three runs scored. Berkman also legged out one of those runs, scoring from first on a Hunter Pence double.

Pence had a nice day too, going 3 for 5 with two RBIs and a run scored while raising his average to .274. It's the first time his average has been that high since June 6th. In fact, Pence has only been at or over .274 for five days this season.

What else? Try Fernando Abad making his big league debut in the ninth inning, pitching a scoreless frame while allowing one hit and walking one. Nice to see the young lefty get his chance and make good on it. It helps that Houston had a seven-run lead when he made his debut, but it's still encouraging.

All in all, this was a good series. The Astros evened their record this month at 11-11while almost evening out their run differential (-7). With the Brewers series approaching this weekend, the Astros have an outside shot to finish with their first winning record in a month this season. 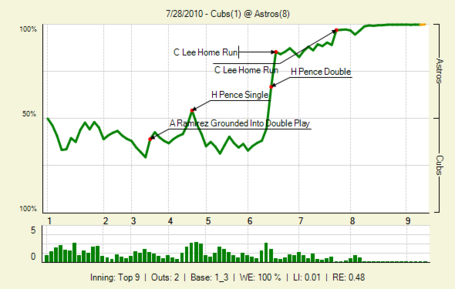