That's right, Brad Mills' grand scheme to put Berkman in the sixth spot of the order worked beautifully. He should bat there all the time, obviously. How else will the Astros get that much power out of Lance Berkman? Would Jeff Keppinger or Humberto Quintero been able to hit that grand slam? No way, no how. This is clearly a lineup that works well...

(There, just needed to needle Stephen a little more for leaving us without his usual brilliant posts for so long)

The one thing about the Astros being so bad offensively is we've seen some really great pitcher's duels so far this season. Tuesday night was no exception, as Ted Lilly and Brett Myers combined to throw some unhittable stuff. It wasn't quite Matt Garza-Max Scherzer, but it was pretty darned good. Myers ended up with the victory, pitching a complete game while striking out a season-high 12, giving up four hits and one run with one walk. That was Myers' eighth victory of the season, tying him for the team lead and solidifying his hold on the only winning record for an Astros starter.

As for the offense, it wasn't great, but Chris Johnson did get a hit for the 11th straight game. Carlos Lee provided a little spark himself, going 2 for 3 with a run scored, a stolen base and a walk. The stolen base was one of the goofier plays you'll see this season. Lee was picked off from first, but since he had already broken for second, he kept running. Lilly threw to the first baseman, who relayed on to Ryan Theriot, who put the tag on a sliding Lee. Well, he tried to put the tag on Lee, but when Theriot hesitated for a second before throwing his glove at Lee's foot, El Bufalo slid in safely. He had a pretty sheepish grin on his face afterwards, but I'm sure he'll take it.

As well most Astros fans will take this win. I'd prefer the game weren't left in doubt for so long (check out how even the WPA graph is for most of the game), but it's still a nice victory. I have to say that Myers has really been a nice addition this season and I'd be sad to see him leave if he's traded. I still wouldn't mind picking up some prospects, but it'd be a sad day. 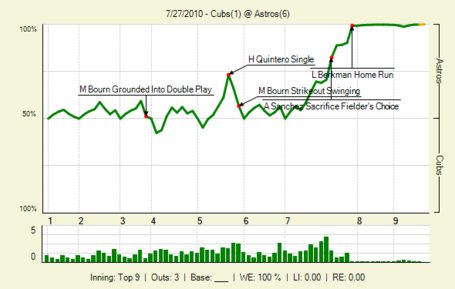